[Editor’s note: This is a guest contribution by Christopher M. Schroeder, an entrepreneur, investor, and author of the book "Startup Rising: The Entrepreneurial Revolution Remaking the Middle East." The post went through Pando’s usual editorial process, and Mr. Schroeder was not paid for his work.]

If you were a globally-minded venture capitalist looking for a potential exciting new market, how would this sound?

A country has two-thirds of its population under the age of 35, with one of the largest Internet reaches in its region. Mobile penetration is over 120% -- meaning many people have more than one device -- and 3G or better coverage will be rolled out everywhere over the next two years. Among its neighbors, the country has one of the highest per capita GDP, and its graduates are among the highest share of software engineers. eCommerce is in its infancy and little travel is booked online, though it has one of the worlds largest consuming populations and has some of the greatest, under-visited tourist destinations on Earth. It's geographic location puts it at the center of global trade between North and South, East and West.

In recent years, I have spent extensive time visiting emerging markets, especially in the Middle East, seeing how ubiquitous access to software in the hands of new generations of entrepreneurs and innovators is changing societies from the bottom up. For over a year I travelled across the Arab world writing a book about the remarkable, under-reported and quieter tech-enabled revolutions happening against the backdrop of political uncertainty. With a group of a dozen similarly curious CEOs from the US, UK, and Canada we just returned after ten days from traveling from Tehran to Shiraz, touring this extraordinary culture and evolving society. Little of what we saw on the ground is what we see in the Western media.

Our greatest takeaway was that the difference in world outlook generationally could not be wider. Young adults were born after the taking of the American Embassy, and it's not part of their worldview. They have less interest in their parents' politics or being told what to do. They have unprecedented access to information due to software and Internet technologies. They see daily what other young people are solving in their country and around the world, and they want to do the same things. And they are building. 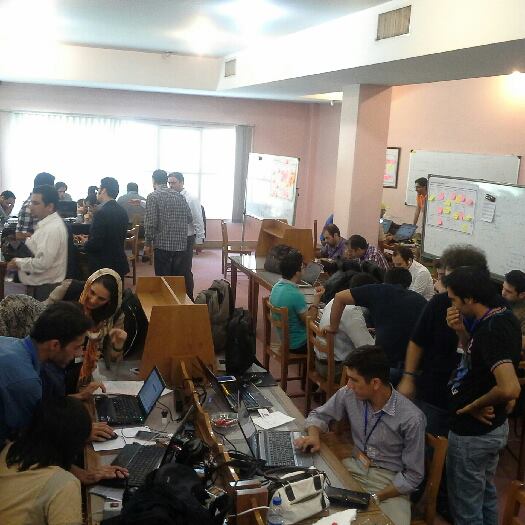 In fact, we were struck by our visit to one of the 31 government funded tech "incubators" in the country helping young people to innovate. We met young entrepreneurs who were converting waste to fertilizer, doubling crop yields while requiring half the water. We met another team building a platform to put all children's books online for schools, allowing collaboration tools for teachers and parents to create the best learning plans. The GPS location software startup used for the buses and sanitation trucks in Isfahan, Iran's second largest metropolitan area, was created by an entrepreneurial team of women. 40% of the teams at the incubator we visited were women. In fact, of some 700,000 students who graduated from universities in Iran last year, roughly the same proportion were women as well. (That said, in 2012, 36 universities announced a ban on women majoring in certain fields including Accounting and Engineering, but it will be interesting to see if the new more moderate President Rouhani will rethink this).

The government-funded incubators, however, according to Mohsen Malayeri, aren't where the real action will come. Mohsen is a twenty-something startup and community leader. Having founded the leading online advertising platform in Farsi, Anetwork, he also cofounded the Iran Entrepreneurship Association, Tehran's leading non-profit focused on building a startup ecosystem in Iran. In the last year, he has hosted over a dozen "Startup Weekends" -- leveraging the resources and methodologies of the US-based non-profit that has helped gather and teach entrepreneurs around the globe -- with nearly 2,000 young startups around the country.

"The government incubators are fine, but tend to be focused on startups around government economic planning," he notes.  Iran has among the largest oil and gas reserves in the world, thus they tend to sponsor technology there, or in agriculture.  "In the last year," he continues, "private approaches are getting stronger and more diverse, more familiar to software development in the West.  Some accelerators are being launched, and like in any new emerging market a few success stories will change the game. You probably never heard of DigiKala.com, but it is the largest eCommerce platform here with well over $100 million in revenue this year alone. I bet it IPOs within two years. And success will breed success."

The challenges are real. The ecosystem for startups is nascent -- there are still few accelerators, shared workspaces, or grassroots networks of entrepreneurs, and mentorship and Angel investing is in short supply. The broader political and business environment remains difficult to navigate and unpredictable with the tensions and sanctions with the West. The Iranian government, as have others in the region, will not hesitate to throttle down internet speeds or ban certain sites they view as political threats. The brain drain is significant. Some estimate as many as 400,000 Iranians -- in a population of near 80 million -- go abroad each year with their return uncertain. "Count the number of successful Iranians in Silicon Valley and then divide by Iran's population," Mohsen laments, "I suspect the numbers would shock the powers here."

Across the entrepreneurs I met, however, there was cautious hope that the future was changing.   The best in global technology is accessible to the creative.  There are over 6.5 million iPhones in the country despite the sanctions and near impossibility to access apps.  For all the bans on social networks, everyone has workarounds to access Facebook, Twitter, YouTube and beyond. Whatsapp is ubiquitous -- young people were surprised I even attempted to send a text through my local phone.  While one government Cyber Criminal Committee just announced a ban on Whatsapp, another committee, the CyberSpace High Council where President Rouhani is the General Secretary, is asking for jurisdiction. As of this writing, Whatsapp is still working well in Iran.

And there is a good flow of information and practices between East and West -- not only in access to blogs and web sites, but books. The Startup Owner's Manual by Steve Blank and The Lean Startup by Eric Ries are both available in Farsi. US-based mentors, especially from the diaspora populations, are engaging with Iranian entrepreneurs through Skype and Google Hangouts.  The young entrepreneur's greatest hope is that, in opening relationships more broadly, there will be an even greater flow of information, engagement, and then investment.

Mohsen is passionate that when things change here, they will change faster than anyone expects, and that all the ingredients and pent up demand will make Iran a leading tech ecosystem in the region and the world.

"It is totally different that what you see in your media," he notes. "We share, we tweet, we like, we build startups to create value to solve problems and answer needs of our 80 million population." He pauses, smiles, but looks me steely in the eye: "I have no doubt we will soon, then, build globally competitive software, globally top selling apps, that you Americans will use without knowing it is from Iran."

Christopher M. Schroeder is a Washington, DC and New York-based Internet entrepreneur and venture investor. He co-founded healthcentral.com, which was acquired in 2012, and was formerly CEO of Washingtonpost.Newsweek Interactive. His book, "Startup Rising: The Entrepreneurial Revolution Remaking the Middle East," was released last fall. He may be followed @cmschroed.