Last weekend, India’s elections swept into power a hardline Hindu supremacist named Narendra Modi. And with that White House spokesman Jay Carney said the Obama administration "look[s] forward to working closely" with a man who has been on a US State Dept “visa blacklist” since 2005 for his role in the gruesome mass-killings and persecution of minority Muslims (and minority Christians).

Modi leads India’s ultranationalist BJP party, which won a landslide majority of seats (though only 31% of the votes), meaning Modi will have the luxury of leading India’s first one-party government in 30 years. This is making a lot of people nervous: The last time the BJP party was in power, in 1998, they launched series of nuclear bomb test explosions, sparking a nuclear crisis with Pakistan and fears of all-out nuclear war. And that was when the BJP was led by a “moderate” ultranationalist — and tied down with meddling coalition partners.

We can understand the White House being forced to congratulate Modi through gritted diplomatic teeth. What's harder to stomach is the public cheering of India's election results by one of the most prominent progressive names in Silicon Valley.

Omidyar Network, as Pando readers know, is the philanthropy arm of eBay billionaire Pierre Omidyar. Since 2009, Omidyar Network has made more investments in India than in any other country in its portfolio. These investments were largely thanks to Jayant Sinha, a former McKinsey partner and Harvard MBA, who was hired in October 2009 to establish and run Omidyar Network India Advisors.

During Sinha’s tenure, Omidyar Network steered a large portion of its investments into India, so that by 2013, India investments made up 18% of Omidyar Network’s committed funds of well over $600 million, and 36% of the total number of companies in its portfolio.

In February of this year, Sinha stepped down from Omidyar Network in order to advise Modi’s election campaign, and to run for a BJP parliamentary seat of his own. Sinha’s father, Yashwant Sinha, served as finance minister in the last BJP government from 1998 (when his government set off the nukes) through 2002. This year, Sinha’s father gave up his seat in parliament to allow Jayant Sinha to take his place.

During the campaign, Sinha's father publicly backed Modi's refusal to apologize over the deadly riots under his watch: "Modi is right...why should he apologize?" His ex-Omidyar staffer son, Jayant,  boasted a few weeks ago that his father's BJP government ignored international outrage in 1998 when detonating its nukes, known as "Pokhran":

When Atalji became PM in 1998, the global media attacked us similarly. However, we pursued our national interests including Pokhran.

Shortly after Sinha left Omidyar Network to help Modi win, Modi gave a speech calling for opening India’s e-commerce market to foreign companies such as Ebay, whose largest shareholder is Pierre Omidyar. The message was clear: Modi is the candidate of hi-tech India, violent ultranationalism notwithstanding. 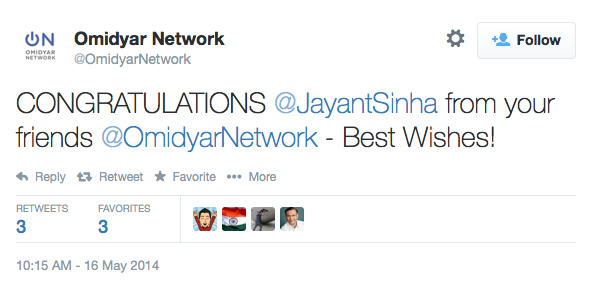 Shortly afterwards, the former Omidyar man went on NPR’s “On Point” insisting that “Mr. Modi is a great democrat.”

“He just won a wonderful election, the greatest election in the history of humanity....non-Hindus should not be worried about this leadership at all.”

To be clear, this isn't just a case of an Omidyar staffer who just happened to become a supporter of Modi. In fact, Pando has learned that Sinha has a long history of working for Modi and his Hindu supremacist BJP party, starting before he joined Omidyar Network and continuing during his tenure as the organization's managing director and partner in India, when Sinha oversaw tens of millions of the Redwood City-based fund’s investments in the country.

Just last month, senior BJP party leader Shiv Shankar Prasad Gupta told a news conference that Jayant Sinha "worked in Modi's team for two years (2012 and 2013)" — while he was simultaneously leading Omidyar Network's India branch. What Gupta didn't do was explain the full extent the relationship between Sinha, Omidyar Networks, the BJP and the US Government. Here are the highlights:

Ultimately, India’s anti-corruption campaign leaders fell by the wayside when their ties to Indian ultranationalist groups, and their foreign funding (World Bank, Ford Foundation, Coca-Cola Foundation) were revealed. But even though the grassroots movement faded, the anti-corruption grievances still burned hot, and are considered the single biggest reason for the BJP party’s historic election victory.

Pando readers who followed our coverage of Omidyar Network’s role in the Ukraine revolution will recognize some similarities here: Funding anti-corruption “good governance” NGOs which effectively served to discredit the ruling party.

In Ukraine, Omidyar Network co-funded with USAID a network of NGOs and campaigns through “Center UA,” led by a former Orange Revolution leader and government minister in charge of NATO integration, Oleh Rybachuk, and his former press spokesperson, Svitlana Zalishchuk. Despite proclaiming lofty goals about good governance, anti-corruption, and transparency, Omidyar Network’s man in Ukraine announced as far back as 2012 his intention of organizing another Orange Revolution. Last year, the Financial Times reported that Rybachuk’s Omidyar-funded outfit New Citizen "played a big role" in organizing the Maidan revolution protests that led to the government’s overthrow this February.

There are other similarities between Omidyar's involvement in Ukraine and India that reflect larger political trends: The alliance in India between oligarchs and Modi's ultranationalism; and in Ukraine the domination of local politics by billionaire oligarchs and violent neofascists. Meanwhile neoliberals are getting their IMF-backed “structural reforms” in Ukraine, and global big business is salivating over the profit potential in Modi-ruled India.

In India, billionaire oligarchs and the business community overwhelmingly support Modi’s ultranationalist politics because Modi has been good for business. And Omidyar's man has already been offering insight into how Modi will help big business even more.

Of course, India is far larger and far more politically complex than Ukraine. No one NGO outfit could play such a central role in politics as “Center UA” did in Ukraine; no single force or oligarch could sway the politics there alone. What makes this story about Omidyar Network’s relationship to the ultranationalist BJP party important is what it reveals about the nature of Silicon Valley money and politics, and what it reveals about the role NGOs and corporate foundations play in advancing the interests of both US geopolitical power and US corporate profits, under the guise of charity.

A deeper look at Omidyar Network’s activities in India gives concrete insight into the meaning of Silicon Valley “enlightened self-interest.” For instance, many Omidyar Network’s India investments have a dual purpose that neatly coincide with eBay’s strategic agenda in India, a closed off but potentially huge e-commerce market that eBay has been trying to break into. As eBay has invested hundreds of millions in Indian e-commerce startups, Omidyar Network has been subtlety reshaping India’s “ecosystem” in ways that would benefit eBay’s bottom line — like bringing mobile technology and access to microfinance loans into India’s rural villages and communities, investing in an online classifieds company, and others.

India has a lot of problems, not the least of which is its yawning inequality: On one end, India has the sixth largest number of billionaires in the world; on the other end, India has one-third of the world’s poor: 400 million Indians live on less than $1.25 a day, and half of India’s households have no access to a toilet. It’s hard to see how what they really need are solar-powered battery-operated mobile devices bought with microfinance loans — but easier to imagine how that fits into Omidyar’s agenda. (Let's not forget that Omidyar-funded SKS Microfinance was implicated in a rash of gruesome suicides by indebted Indian villagers, mostly young women, some of whom drank bottles of pesticides or drowned themselves to avoid SKS Microfinance debt collectors.)

On the face of things, it's hard to square allegedly progressive hi-tech billionaires like Omidyar or Google having any interests or links that coincide with brutal sectarian chauvinists like Narendra Modi and his BJP party. But techies aren’t always as progressive as their PR fluff claims; and in India, tech industry yuppies are open about their enthusiasm for Modi and the BJP. Along with techies and the urban middle-class, Modi’s strongest support also comes from India’s oligarchs and big business interests.

And Omidyar isn’t the only Big Tech titan with cozy ties to the “hi-tech populist.” In September 2012, days after members of Modi’s inner circle were found guilty of conspiracy to murder and rape during the 2002 anti-Muslim pogroms, Google and Modi partnered in a cross-promotional Google+ Hangouts event. The Internet search giant boasted that Modi was “the first Indian politican to debut on Google+ Hangouts,” adding:

“The theme of the Hangout session was 'Strong and Glorious India Long Cherished by Swami Vivekananda'...”

A few months later, in spring 2013, Modi was the star speaker at Google’s “Big Tent Activate Summit” in Delhi. Modi’s home page boasted of his relationship with Google:

“Before delivering the address Shri Modi will interact with Mr. Eric Schmidt, the Chairman of Google Inc. via Google+ Hangout.”

It was at last year’s Google event that Modi coined the pro-tech campaign slogan which he ran on this year:

“The Three IT’s: Indian Talent plus Information Technology is equal to India Tomorrow.”

There is nothing inherently progressive about high-technology or its leaders. Adolph Hitler famously said, “I’m mad on technology!” — and he spared no lives or resources to advance technology, most notably in rocket science and aerospace. IBM punch-card computers played an essential role in organizing the Holocaust. Technology also helped organize the Arab Spring in Egypt — and the counter-revolution by the current military dictatorship.

What the story of Omidyar Network and hi-tech industry’s love affair with Indian ultranationalism reveals is that focusing too much on the wonders of technology is a distraction to understanding the more serious business of tech industry politics and power, and how that power is wielded around the globe, whether directly through investments, or indirectly through foundations and political campaigns.

Arundhati Roy recently summed it up this way:

“As public money gets pulled out of health care and education and all of this, NGOs funded by these major financial corporations and other kinds of financial instruments move in, doing the work that missionaries used to do during colonialism—giving the impression of being charitable organizations, but actually preparing the world for the free markets of corporate capital.”

By following the efforts and investments of Omidyar Network in India, we learn an enormous amount about the complex interplay between Big Tech interests and power, the Pax Americana, local oligarchs, and the useful politics of right-wing populism. There is much more to this story, and it doesn't get any less ugly from here.

Omidyar Networks did not respond to a request for comment for this article [~12hrs prior to publication].

(Special thanks to Aditya Velivelli for helping educate me about India's complex politics and social fabric—M.A.)