Mary Meeker has confirmed what everyone from Mark Zuckerberg to pre-teen schoolchildren already knew: people are starting to favor private communications over public networks. She noted this shift in her most recent Internet Trends report, the annual guide to everything that data-minded venture capitalists are thinking about, and has thus made it a Big Fucking Deal.

Here's the relevant slide from her report, which reads like a cross between investor jargon and the abbreviated language horrible people use whenever they write something on their phones: 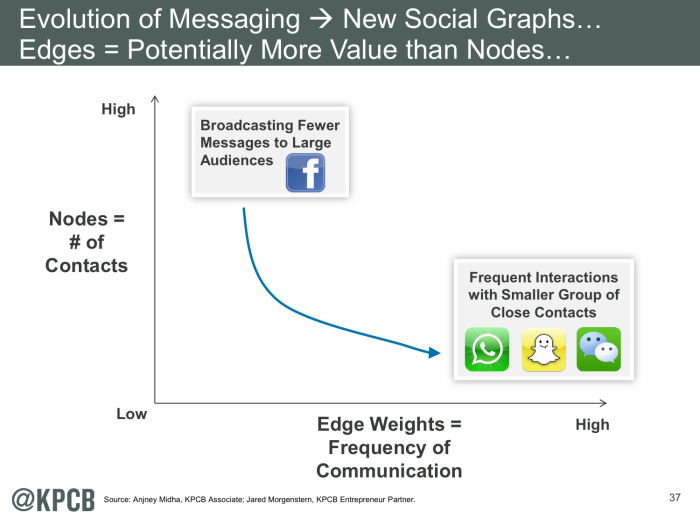 This change won't come as a surprise to anyone who has been paying attention to social media for a few years. The Atlantic's Alexis Madrigal wrote about the popularity of direct messaging tools in October 2012. I wrote about the trend in April 2013. Since then we've seen the rise of companies like Snapchat, the multi-billion dollar acquisition of WhatsApp, and Facebook's new commitment to offering private communications services, all in just a few short months.

Switching to direct communications tools was prompted at least in part by a desire to control the audience for a particular message or photograph. Sharing something to Facebook often feels like streaking through the main street of a small town: everyone you've ever met is going to see things that you would prefer that they wouldn't. These tools aren't anything like that.

But the shift might also be caused by another trend that Meeker notes in her report, and that publications like Pando have commented on for months: the switch to single-purpose applications from the everything-to-everyone software that was so popular when the app revolution was just getting started. Here's the slide from the Internet Trends report: 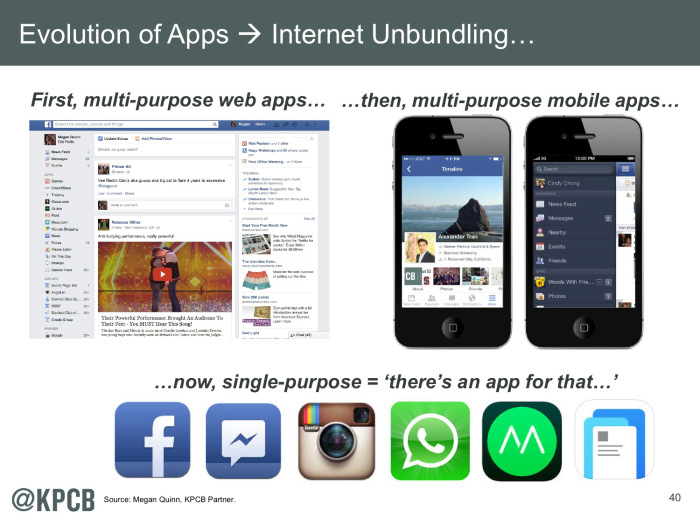 Many popular messaging apps realized that people want simple software before their larger counterparts did. (Facebook had separate Camera and Poke apps, but it abandoned them long before these messaging apps started gaining traction.) This realization, combined with the desire to keep some things between individuals or small groups instead of basically everyone, might have allowed those messaging applications to grow in popularity as other apps faltered. That and, you know, sexts.