The week of the brogrammer: Why bro-shaming won't fix tech's sexism problem

As the Awl's John Herrman points out, this has been the week of the brogrammer.

The last few days brought not one, not two, but three instances of male tech founders behaving like sexist assholes. First, RapGenius cofounder Mahbod Moghadam responded to Elliot Rodger's killing spree by speculating that his sister is "smokin' hot," among other bizarre observations. Emails from Evan Spiegel's college days revealed that the Snapchat CEO was the bro we thought he was, calling on his fraternity brothers to "have some girl put your large kappa sigma dick down her throat." And finally, Uber's Travis Kalanick, whose maturity when it comes to women is equal to that of my five-year-old nephew, bragged about how many more "ladies" he gets now that his company is blowing up.

Herrman writes, "Bro, these three samples were collected from this week alone: This isn't a fluke! This is who wins in the tech meritocracy." He goes on: "The most promising sector the economy has is represented by a fraternity of leering boys wearing their fathers' suits."

Before we go any further, let's just say that Moghadam, Kalanick, and Spiegel (at least the 2009 version; he's now apologized for the emails) are clown train wrecks who deserve whatever ridicule's thrown their way. This is in no way a defense of their loutish behavior.

But, there are a couple problems with what Herrman insinuates. First off, while he's obviously right that being a loud sexist prick does not preclude you from enjoying an enormous amount of success in tech (or, sadly, any other cash-engorged industry -- we all saw "Wolf of Wall Street"), it's an overstatement to say that Spiegel, Kalanick, and Moghadam function somehow as a stand-in for the tech industry at large. To be sure, the trend is not a fluke, nor should it be ignored. But brash brogrammers also comprise a small portion of the larger founder population.

That leads into the bigger problem: Many of those other non-bro founders, those "goofy awkward geniuses or mercurial obsessives" he says we've mythologized, can also be sexist, intentionally or not. And in these cases, it's a far more subtle and maybe even more insidious form of sexism that can't be as easily shamed and apologized away by the 24-hour Twitter hate cycle.

Writer Kate Losse captured this other, quieter sexism in a must-read post titled "The Speculum of the Other Brogrammer."

The problem is that aside from those few guys reveling in their spray-tanned fantasy 'brogrammer' masculinity, very few people in programming identify with the term 'brogrammer'. The brogrammer is always someone else -- he is THOSE Facebook guys who yell too loudly at parties and wave bottles in the air, he is not the nice, shy guy who gets paid 30 percent more because of his race, gender and appeal to the boy-genius fetishes of VCs. The loud and tacky 'brogrammer' is a false flag -- if you are not a brogrammer, the logic goes, you must be an outcast genius who has suffered long and would never oppress a fly. The industry is full not of the former but the latter -- programmers who are smart and may present as harmlessly "nerdy" but whose sense of themselves as being 'the underdog' means that it is very hard to see the ways in which they participate in unconsciously but potentially harmful ways in an industry that has coded them as kings. In reality, programmers in Silicon Valley can be fully and invisibly privileged without ever touching a Grey Goose bottle-service setup or a tube of hair gel.

In other words, not all symbols or beneficiaries of sexism in tech are "bros." If you prefer your cultural commentary in the form of a Venn Diagram, I made one for you: 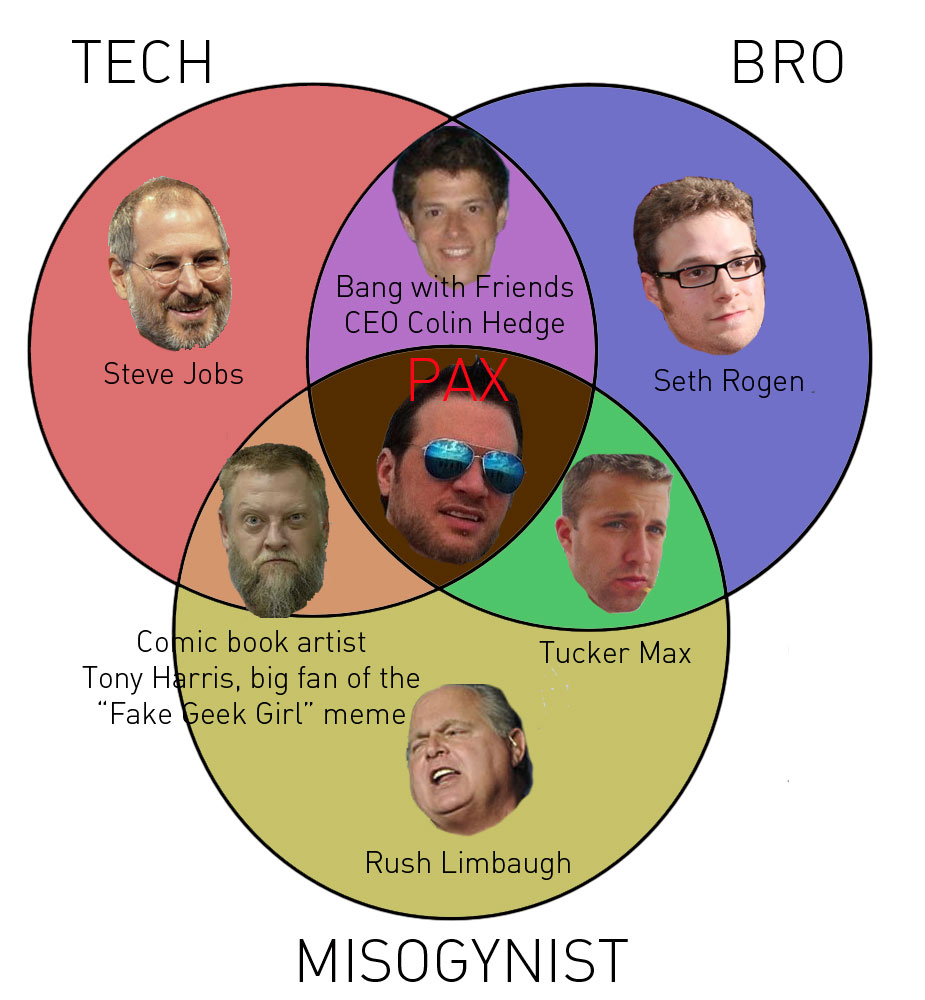 The equation is far more complex than "These successful tech dudes are sexist bros, therefore all successful tech dudes are sexist bros, all tech bros are sexist, and all sexist tech people are bros." Nowhere is this understated sexism better codified than on HBO's "Silicon Valley." The protagonists don't sit around shotgunning Budweisers and slapping girls' asses. Nevertheless, they rarely view women as anything other than obstacles or objects, functioning solely to bring about anxiety or arousal.

This attitude toward women in tech has real consequences. This week, Google released a transparency report stating that only 17 percent of its technology staffers are women. This troubling statistic, and the trio of badly-behaving sexist founders this week, are both symptoms of a larger, more pervasive sense among the people bankrolling these billion dollar companies who think of the mythical founder-genius in very male terms.

The struggles facing women in tech are not Kalanick's or Moghadam's fault. Rather, Kalanick and Moghadam were allowed to exist and succeed for so long without being called out because of a larger boys' club attitude that excuses sexism, both when it's subtle and when it's overt. And lately, it seems like people are more interested in bro-shaming than they are in discussing these systemic problems facing technology and, you know, most every other industry.