ScrewYouTube: People are finally realizing that YouTube screws musicians worse than anybody

Last month, the Worldwide Independent Network (WIN), a trade organization representing independent labels, accused YouTube of bullying small labels into signing up for its upcoming Spotify-style music streaming service, threatening to block these artists if they refuse to agree to the Google-owned company's reportedly under-market terms. It was a shocking allegation and, if true, an audaciously evil move, even coming from a company in bed with mercenaries.

Now it appears YouTube has made good on those threats.

The Financial Times reports that YouTube will start blocking videos "in a matter of days" from artists whose record labels refused to agree to the terms of the platform's new subscription streaming service -- terms that, according to WIN, are non-negotiable and worse than the deals offered by Spotify, Deezer, and Rdio. And it's not just small-time artists who will be blocked. Although YouTube’s head of content and business operations Robert Kyncl says 95 percent of the labels have agreed to the terms, that remaining 5 percent includes huge acts like Adele, Jack White, and the Arctic Monkeys.

The narrative of artists getting a raw deal in the new music economy is nothing new. But until recently, the outrage has been directed at Pandora and Spotify, who pay minuscule royalty payments even as they struggle to achieve sustained profits or, in Spotify's case, profits at all. Such a galling move from YouTube, that wonderful (and allegedly profitable) democratized network of creators, may come as a surprise to casual observers of the music industry and even those within it.

But to paraphrase Marc Andreessen, let's all get off our collective fainting couch. YouTube has long screwed over musicians, and this is just the latest piece of evidence suggesting that it cares far more about striking lucrative business deals than it does about building a sustainable platform for the artists that provide all that content.

As much as musicians like to complain about revenue from Spotify and Pandora, YouTube's ad-supported artist payments are downright microscopic, at least on an industry-wide scale. Let's break down the math: YouTube has a billion monthly active users. Accustream estimates that 38.4 percent of all YouTube views are music videos which means the company could have almost 400 million users actively listening to music. And yet, the revenue the music industry received last year from YouTube and all other ad-supported streaming (that includes Spotify's free tier) was only $220 million. That's far less than the $590 million that came from Internet radio services -- the lion's share of which was generated by Pandora which only has 70 million users. In other words, a few more than 70 million Internet radio listeners sent over twice as much revenue to artists and other industry stakeholders than YouTube's 400 million listeners.

What's even worse is that users who pay a monthly fee to subscribe to Rdio, Deezer, or Spotify's paid tier, generated $628 million in revenue last year, and generous estimates suggest there are only around 25 million listeners who fall into this category. The distribution of revenue in the music industry is clearly broken, and YouTube, with the biggest user base and the lowest payout, both in aggregate and per user, is the main beneficiary of that imbalance. 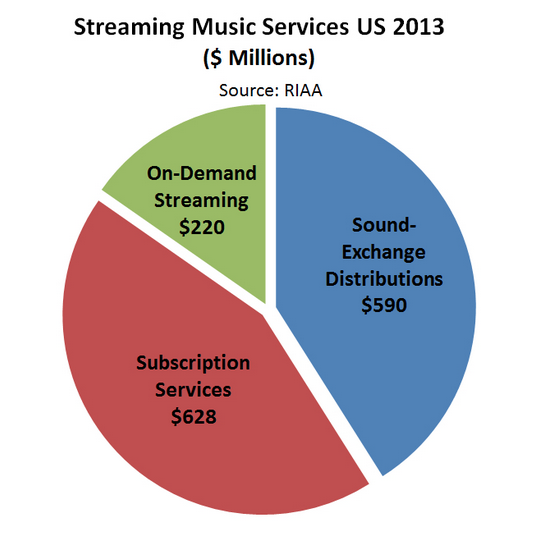 While high-profile artists like David Byrne, Thom Yorke, and T. Bone Burnett have written at length about how Spotify and Pandora are essentially destroying music as we know it, the criticism of YouTube has been far quieter. The most high-profile artist to serve as Captain Ahab to YouTube's white whale is perhaps British singer-songwriter Billy Bragg, who last February told Music Ally, “If we’re going to speak out about the paucity of payment from streaming services, if we’re pissed off at Spotify, we should be marching to YouTube Central with flaming pitchforks!”

After today, you can expect the anti-YouTube mob to grow a whole lot bigger.