It was a cold night in February when the digital skirmish went down. Fifteen social media soldiers lay patiently in wait, unsure what they were waiting for, but certain they will know when it happens. This cadre of ninjas, mavens, and gurus are not unlike the squads of great men caught in fierce battle on the gridiron before them on the television. They don't mind working on Super Bowl Sunday. Twitter never takes a day off -- neither do they.

And then, without warning, the moment arrives. The power is out at the Superdome. Social media's infernal machinery is out of control. There's a brand somewhere that needs to make its voice heard, but it can't be a mere shout into the abyss -- it must be a bolt of lightning, ripping through the noise and lighting up the darkness. The team works fast and conjures the Casablanca, the Abbey Road, and the Mona Lisa of branded tweets all wrapped into one... 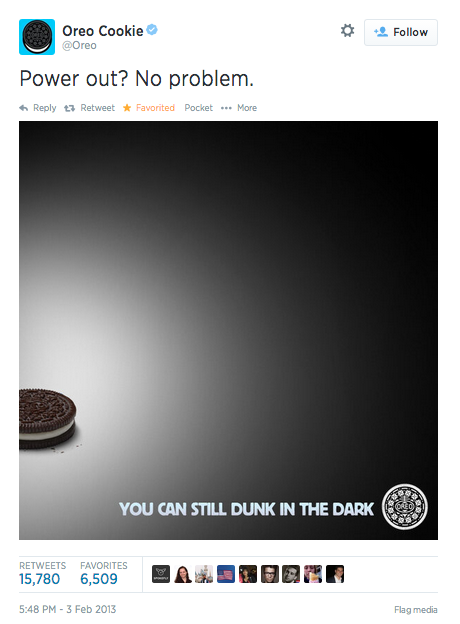 ...or so you'd assume from the breathless reaction from the marketing world.

The moment was heralded as the future of real-time advertising by many marketers and media types. Suddenly every brand was chasing an Oreo moment to coincide with whatever event, big or small, the social media masses are talking about. Sometimes the results are annoying yet innocuous, like when brands as diverse as Hostess Snacks and Nintendo felt compelled to insert themselves into the conversation surrounding the Royal Baby. Other times, the results are downright offensive, like when recipe site Epicurious tweeted in the wake of the Boston Marathon bombing that a "bowl of breakfast energy" was just what the city needed to bounce back.

But the era of branded tweets for every trend may be coming to an end. According to a new Gallup poll, 62 percent of U.S. adults say that social media has no influence on their purchasing decisions. Another 30 percent say social media has "some influence," but only 5 percent say it has a "great influence." That Oreo tweet may have been retweeted over 15,000 times, but it's unlikely the company sold a bunch more cookies because of it.

Over at the Wall Street Journal, Jeff Elder spoke to a number of marketing execs and business owners who say they have re-examined their social media strategies. Instead of chasing followers using pseudo-clever, topical social media posts, many companies are diverting that energy toward analyzing social media chatter to determine public sentiment about their brand and to arrive at actionable insights that can really help their business. In other words, less talking and more listening.

Jan Rezab, CEO of social media analytics company Socialbakers AS, tells the outlet, "Fans and follower counts are over. Now it's about what is social doing for you and real business objectives."

Of course, that hasn't stopped many brands from begging for retweets and likes by creating lame social media content. Although the percentage of Facebook fans reached by brands has dropped from 16 percent to 6.5 percent since February 2012, according to data shared with the Journal, Facebook's advertising revenue continues to grow at a wild pace. Meanwhile, digital advertising firms still rake in cash composing tweets for corporate clients. Business Insider's Aaron Taube profiled one such agency, Huge, which, quite absurdly, spent 45 days on a single tweet for President Cheese.

In a telling example of Huge's zealous worship at the throne of social media, one of Huge's community managers Megan Toth told the outlet, "We don’t read newspapers anymore, or even turn on the TV.”

Maybe they should. According to Nielsen, consumers still trust print and television ads more than social media ads.

As for that President Cheese tweet that took a month and a half to create? It only has 180 retweets as of this writing. That won't earn the company a lot of cheddar. [illustration by Brad Jonas for Pando]