Teens may not think Facebook is "cool," but that hasn't stopped them from using it all the time

Teens are abandoning Facebook! Facebook will be dead by 2017! No, scratch that, it's already "dead and buried!"

Sowing panic, particularly when it comes to powerful institutions, has always been a way to round up tasty clicks. And there's no company journalists love to get all apocalyptic over more than Facebook. Slate's Will Oremus documented this phenomenon following a Business Insider report arguing that tweaks to Facebook's News Feed algorithm "crushed" Upworthy. Oremus summed up the sky-is-falling sentiment perfectly: "Journalists will believe anything about the social network, as long as it’s totally outlandish."

So I'll forgive you if you don't share this article. It's not very "cool." It makes no wild claims and is based on data which appears to be sound. Instead it makes the decidedly uncool argument that while Facebook may have lost some young users in aggregate, it's still their favorite social network in terms of how frequently they use it.

According to a Forrester survey of 4,517 online users between the ages of 12 and 17, 28 percent said they use Facebook "all the time." That's slightly more than Facebook-owned Instagram (27 percent), YouTube (24 percent), Snapchat (23 percent) and Twitter (21 percent). 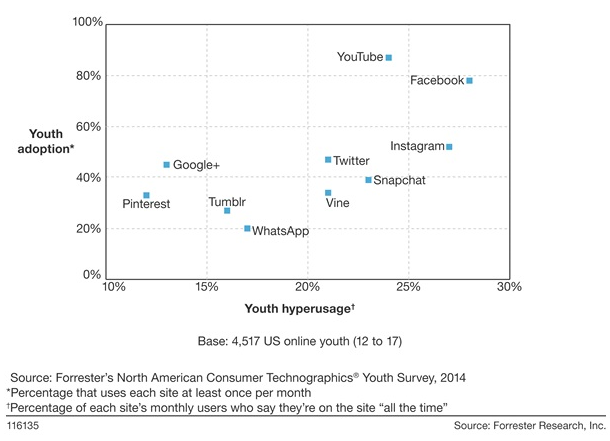 Facebook also ranks second only behind YouTube in terms of casual users, with almost 80 percent of respondents saying they use it at least once a month.

Of course, this is only one study, and for me to take it as gospel makes me just as bad as the "Facebook truthers" who constantly predict its demise.

But these results are echoed by another recent survey by Niche, a recommendation site for K-12 schools and college. It surveyed 7,000 high school seniors from the class of 2014 (who, granted, might be considered "old" themselves depending on your perspective) and found that Facebook topped all other social networks and apps in terms of usage, with 60 percent saying they visit it daily. Like in the Forrester poll, YouTube usage was slightly ahead of Facebook in terms of casual usage, with 97 percent saying they've used YouTube versus 87 percent saying they've have used Facebook. The next three most commonly-used social networks are identical to the Forrester report (Instagram, Snapchat, and Twitter) which lends even more legitimacy to the surveys.

I get why people like "youths hate Facebook!" stories. Everybody wants to sound cool, and a good way to do that is by pretending that you know something about young people that others don't. But cool or not, I'd rather trust reality when it's staring me in the face.