Digital music sales are in a free fall, as Spotify does to iTunes what iTunes did to CDs

Why would you pay $9.99 or more for one album on iTunes when for the same price each month you can hear millions of songs on a streaming music platform like Spotify?

The concept of digital downloads is something more and more listeners are questioning, as new numbers from Nielsen Soundscan show that album and track sales continued to plummet in the first half of 2014. From January 1 to June 29, the industry sold 121 million albums and 593.6 million tracks. Comparing that to the 142 million albums and 682.2 million tracks sold in the first half of 2013, we see declines of 15 percent and 13 percent, respectively. These rates of decline closely match the precipitous fall of physical CD sales through the 2000s. In other words, Spotify is doing to iTunes what iTunes did to CDs.

It's pretty clear that streaming music is to blame for the decline in digital sales. Since 2011, the percentage of music industry revenues generated by streaming has accelerated: 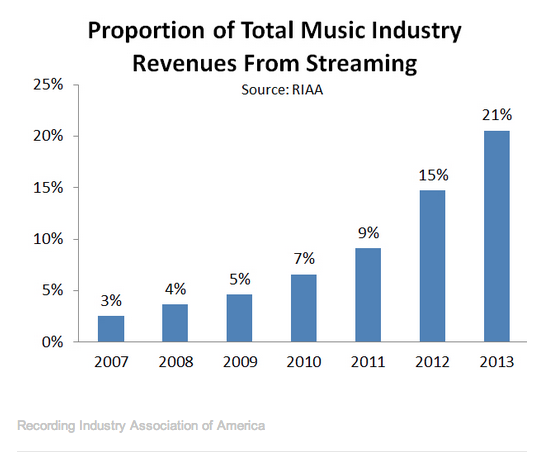 The big question is, can streaming music revenue make up for the quickly worsening losses to digital download revenue? Or will this massive shift in consumption patterns literally cut the industry size in half like it did throughout the 2000s?

Good news: The switch from downloading to streaming likely won't devastate industry revenues like the shift from physical albums to digital downloads did. Despite the accelerating rise of streaming over the past few years, annual US music revenues have held steady at around $7 billion since 2009. That year, traditional purchasing made up 95 percent of total US revenue, compared to only 79 percent last year.

Of course, stopping the bleeding is cold comfort to artists and other industry stakeholders faced with low royalty payments from streaming music services. But while it's true that the revenue generated from one stream is far lower than the revenue generated by a digital download, that may not matter. Many believe the market for paid music subscriptions is set to explode, particularly on a global scale.

“We’re not even at the beginning of the first inning when it comes to the global demand," says Marc Ruxin, who just became the new COO at Rdio. The notion of music as a file stored on your phone or computer may soon become as obsolete as the notion of music as a physical object. That will increase the demand for mobile and offline streaming which, crucially, are generally only available on paid subscription services like Rdio or Spotify's paid tier. And as I've written before, the revenue generated from users actually paying for music far outweighs the revenue generated by free ad-supported streaming.

So from this perspective, the death of downloads, despite the fact that their payout is higher per-unit than streaming, may not kill the music industry at all. On the contrary, it may resurrect it for the first time in over a decade.