When ISPs demand interconnection fees from Netflix and the like, nobody wins

The Internet Association just sent a letter to the Federal Communications Commission asking the agency to prevent ISPs from collecting interconnection fees -- which offer better access to the ISP's network for companies like Netflix and YouTube -- so it can help defend the free Internet. The companies asked to pay these interconnection fees have argued that it's unfair for ISPs to be paid twice (once by them and once by a consumer) to send the same information; the ISPs have said that their networks can't handle these data-hungry services if those fees aren't paid.

I have argued in the past that these deals would negatively affect the open Internet by giving large companies a chance to monopolize their markets when small companies can't afford to pay the same fees to ISPs. I don't think that ISPs should be allowed to double-dip by getting paid twice for sending the same information, nor do I think that the FCC, which has avoided the issue in the past, will reexamine the problem at the Internet Association's request. These companies have created a system of corruption that won't be easily overturned any time soon.

But one thing is clear: consumers are losing no matter what. It's bad for them to have their Internet connection affected by whether or not a company has paid their ISP for better access to the network. It's worse for them if these companies all decide to pay the fees and force small companies out of the market, which would offer effective monopolies to any company that can afford to pay interconnection fees. Unless something is done to shatter and remake the United States' infrastructure, there is no scenario in which consumers are getting what they pay for.

Some consumers will suffer just because their content company of choice has picked a fight with their ISP of necessity. (In many places people don't have a choice of what ISP will provide their Internet connection -- they pick whichever company operates in their market.) That was made clear with the release of Netflix's latest speed index, which measures the speed with which ISPs deliver videos to its customers and shows a noticeable drop in the performance of Verizon FiOS following a long-running dispute between the two companies.

Here's the chart showing the performance dip, as taken from Netflix's website: 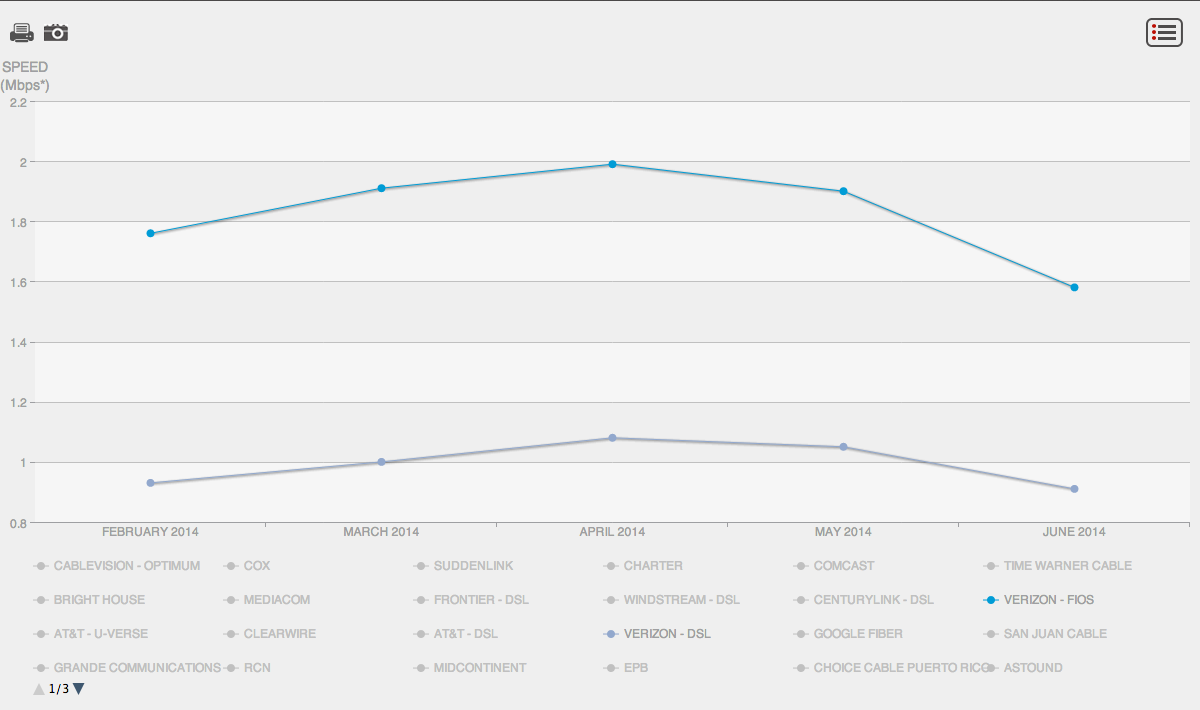 Given the dispute between Netflix and Verizon, it's doubtful that this is a coincidence. It's the direct result of their problems, much like Comcast's performance bump in April was the result of Netflix's decision to make a deal with the devil and pay the company interconnection fees. It seems that consumers don't need ISPs to win this battle over interconnection fees to be fucked over, either by content companies seeking leverage or by ISPs willing to annoy their customers.

The only question is whether this will be a temporary setback that helps consumers in the long-term or a taste of what will happen in the future. Either way, nobody's winning -- not the ISPs that want to charge these interconnection fees, not the content companies that want to avoid them, and not the consumers who just want the services they pay for to work properly.