Secret founder doesn't care if teenagers kill themselves, as long as they don't cause a PR headache

Yesterday, Sarah Lacy wrote a blistering critique of anonymous gossip app, Secret, adding to a growing chorus of criticism of the service and its growing use as a tool for bullies and defamers. As the Economist put it:

Once, bullies taunted their victims in the playground; today they use smartphones to do so from afar... If you are bullied via Facebook, Twitter or text, you can usually identify your attacker. As a victim of an anonymous messaging app you cannot: at best you can only guess which “friend” whispered to the online world that you might be pregnant.

Sarah's criticism wasn't just aimed at the founders of the service, though, but also at those who funded it. As she wrote:

If Secret continues to grow with everyone trying to profit off of its popularity willfully justifying and ignoring the social cost, there will be Secret suicides. As a community, we will regret this. It will make the Craigslist killer and the Airbnb meth head-gate scandals look like nothing.

Apparently this hit a nerve with Secret founder, David Byttow who tweeted this morning in response the piece:

In a separate Tweet he dismissed Pando as a"small echo chamber."

It took me a while to understand what Byttow was saying, and even longer to come to terms with how sociopathically callous he apparently is when it comes to human life.

Byttow's argument seems to be that the relatively small number of people who clicked on a particular link in a story indicates that not many people saw Sarah's criticism. And so therefore it was irrelevant.

The first part of that logic suggests that Byttow doesn't understand how links work. According to our internal numbers, out of the thousands of people who read Sarah's post, just 39 readers felt the need to click on the word Secret. Presumably that's because the vast majority of Pando readers -- especially those who clicked on a story about Secret -- know full well what Secret is. It wasn't exactly a story about a product launch. (By the way, if Byttow's % is accurate, he's claiming 3m pageviews for the front page of Secret.ly.)

But even assuming that Byttow is correct and somehow the number of clicks on a link buried in a given story is illustrative of the total number of people reading that story, his response is absolutely chilling.

Grotesque as it might seem, Byttow's position on concern over his app's potential to cause an increase in teen suicides is that criticism only matters if enough people see it. That is, young people killing themselves thanks to Secret only matters to Byttow if it becomes a PR problem.

Certainly that interpretation seems to be supported by Secret's recent hiring of Sarah Jane Sacchetti as head of marketing. Sacchetti was previously communications head at Formspring. Here's the Economist again:

Formspring, an anonymous Q&A site beset with cyberbullying and allegations of related suicides, raised $14m before shutting down a year ago.

Because it's far easier and cheaper to hire someone to deal with bad PR around suicides than to not actually cause those suicides in the first place.

The obvious question, then, is how many people have to read, or click through from, an article for Byttow to be concerned about human life? A hundred thousand? A million? Ten million?

What exactly is the magic number at which Secret's founders -- who just personally pocketed $6 million during the company's latest fundraising round --  stop counting their money and start counting the costs of the anonymous cyberbullying they facilitate? The best person to answer that, of course, is Byttow himself. So I did... 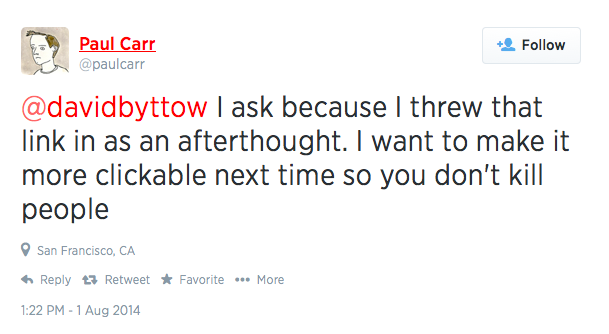 At the time of writing, Byttow hasn't responded. So all we know for sure is that it will take more than the ~2 million monthly unique readers of Pando to make him give a shit about human life -- or at least give more of a shit than he does about the $6 million payday he and his partners just received.

My appeal, then, is this: If you run a high traffic site -- maybe Walmart.com or whatever the modern equivalent is of Hamster Dance -- please consider posting a few words of encouragement to David Byttow to stop making tools for bullies.

If we all work together on this, and send enough traffic his way, maybe we can make him give a damn whether people live or die.

Update II: You won't BELIEVE this response from Secret's head of PR. 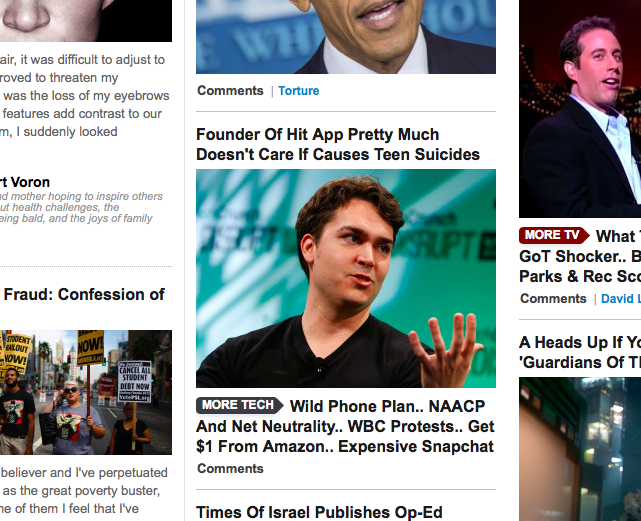