Earlier today, the Times of Israel, an online newspaper claiming a readership of 2 million, published an opinion piece on the Israeli-Gaza conflict called, "When Genocide is Permissible" by blogger Yochanan Gordon. Gordon, who falls squarely on Israel's side, argues that when fighting an "enemy whose charter calls for the annihilation of our people," then is not "genocide" an permissible response to this?

"Nothing, then, can be considered disproportionate when we are fighting for our very right to live."

The post quickly achieved the worst kind of virality, spreading across the web a message that, while not quite pro-genocide, didn't exactly rule it out.

So how did it get published in the first place? What Times of Israel editor approved this post if it so clearly violates the site's mission which, according to the site's About page, is "to serve as a platform for constructive debate regarding the challenges facing Israel"?

According to Yair Rosenberg, editor of the Israeli National Archives, the Times of Israel's "bloggers" are not edited or moderated in any way. The system works more like Buzzfeed's contributor network or Medium than, say, the New York Times' array of blogs.

But while Buzzfeed's and Medium's claim they are "platforms," not "publications," the Times of Israel's presentation of Gordon's article looks undoubtedly journalism-y. It's an opinion piece, yes, but opinion pieces still require a measure of accountability: 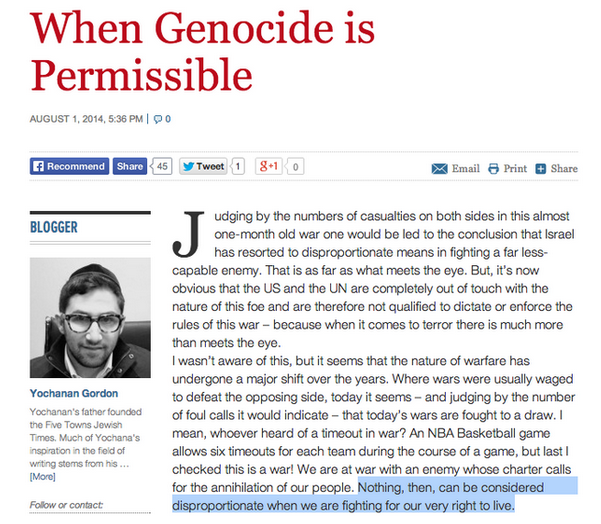 You would be forgiven for thinking, at first glance, that the Times of Israel is some decades-old paper of authority. In fact, it's an online-only outlet established in 2012, funded not unlike many new media organizations in America: By a mega-rich dude. In this case, the billionaire benefactor is Seth Klarman, CEO and President of the Boston-based hedge fund, the Baupost Group. When Klarman first launched the outlet, he stated he would have no editorial control over the publication. But in that same statement, he also wrote, “My own interest in Israel has become even stronger post-9/11, when the threat of terrorism and the danger of radical Islam collided with a global campaign on many fronts to delegitimize the Jewish State.”

Regardless of Klarman's politics or how much editorial control he may or may not wield, I'm glad somebody at the Times of Israel realized the total irresponsibility of legitimizing genocide as a warfare tactic. It's a lesson for any publication willing to throw caution to the wind by hosting unedited contributors. In fact, if the Times of Israel is willing to publish unedited content, what's the point of having "editorial guidelines" in the first place? As for Gordon, his response in the wake of the post has been mixed -- he doubled down on his genocide talk in a series of tweets, but then deleted them.

As Rosenberg was quick to note, today was a perfect example of how the Internet's outrage-meter tends to spike over matters of bad taste as opposed to real-life atrocities. 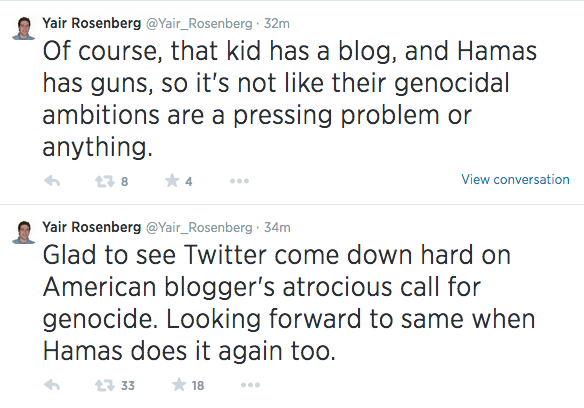 But perhaps the best summation came from Jonathan Schanzer, VP for Research at the Foundation for Defense of Democracies:

"If [you] argue that one blog represents all Israelis, or the Hamas charter represents all Palestinians, please reconsider your presence on twitter."