The story of anonymity app Secret just lurched from breathtaking to horrific.

An advocate for teen suicide awareness in Silicon Valley has told Pando that Secret executives were "too busy raising money to care" when she tried to warn them of the potential danger of their app.

Christine Lu is a advocate for teen mental health issues, who regularly speaks to high school students about her sister's suicide. She is also an advisor to mental health group Let’s Erase The Stigma (LETS).

Back in March, Lu contacted Secret founder David Byttow on Twitter to “warn [Secret] about the dangers of their app once it expanded outside early adopter tech circles.” Lu offered to set up a meeting between Secret executives and LETS.

As she explained by email:

My idea was to get the Secret team to meet with some of the kids at LETS.org in Silicon Valley. A dialog. These kids self organize within the school to try and create a safe place for people who are susceptible to bullying. UC Berkeley did a one year study on us and schools with a LETS chapter showed a lot of improvement in student awareness of mental health.

Byttow replied on Twitter, suggesting they move the discussion to email: “David was initially responsive on Twitter and had asked me to email him, so I did in good faith.”

What happened next, Lu believes, is proof that Secret has no interest in addressing the issues around teen suicides. They were “too busy raising money to care,” she told me.

Certainly the email thread, reproduced in full below, with only contact info redacted, smacks of a classic PR play to move criticism off Twitter and transfer it to email where it can be more easily brushed off. 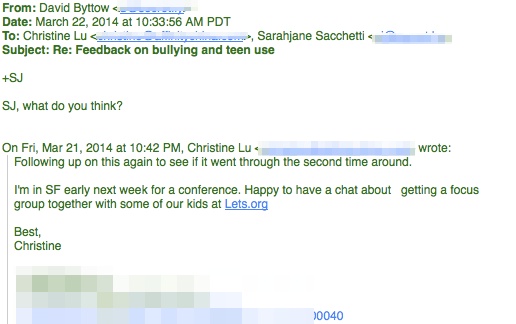 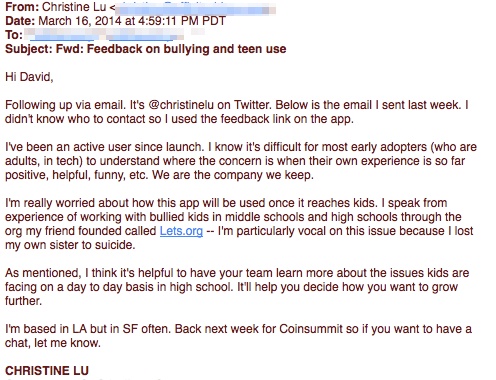 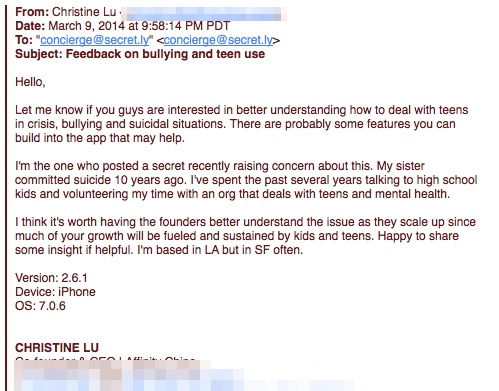 In that thread we see Lu make three attempts to reach Byttow -- once using the company's online form, and twice by email -- before finally he replies with a two line response…

SJ, what do you think? “SJ” in this case, is Sarahjane Sacchetti, Secret’s head of PR who previously had the same role at Formspring. As reported by the Economist…

Formspring, an anonymous Q&A site beset with cyberbullying and allegations of related suicides, raised $14m before shutting down a year ago.

There’s something incredibly jarring, both by the brevity of Byttow’s response to an email from someone who explains that she had lost her own sister to suicide (although, as Lu points out, he was likely busy closing the $25m funding round which netted the founders a $6m personal payout) and by his decision to pass Lu’s request off to his head of PR.

As I wrote on Friday, Secret appears to see the risk of teen suicide as just a PR headache that needs to be solved, rather than a reason to change its product or business strategy.

But it gets worse. Sacchetti, who yesterday published a blog post apologizing for her callous response to concerns over teen suicides didn’t bother replying to Lu.

Lu says there was “no reply after David cc'd Sarahjane so I just deleted the app and gave up trying.”

There’s no doubt the risk of teen suicides and cyberbullying is a real issue for Secret and its users. Browsing the app’s reviews on the Apple app store reveals a heartbreaking litany of cries for help from victims of bullying, and their friends.

Alongside those horror stories sit reviews from bullies gloating about the app’s potential for targeting vulnerable teens.

I emailed Byttow and Sacchetti yesterday evening asking for comment on Lu's email thread and inviting them to share a list of any teen suicide or mental health organizations they had consulted with about the risks of Secret.

With depressing irony, Sacchetti responded promptly saying “Paul, I'll respond shortly” — but, 24 hours later, has not followed up. A few hours later, she posted her Medium post about how upset she is at the criticism she has received during this weekend’s PR storm.

Byttow, however, did respond with a statement, without addressing Lu’s email or naming any groups they had consulted about how to keep their users safe.

We've invested a lot into people and systems to keep Secret safe. It's how we've managed to curate a thriving community in less than six months.

In March, we were just three people, including me and Chrys. SJ was not a full-time employee. I hired SJ because she has experience that very few others have. It's important for me to build out the strongest team to solve these problems.

Today, we give users the tools to report, block and hide content. Additionally, we work hard to moderate the community 24-hours a day, 7 days a week. We always aim to get faster and smarter. You can find our public community guidelines here: http://secret.ly/community.

Suicide prevention is something we take very seriously, yet as a society still know surprisingly little about. We provide resources for users to either contact help via phone or online. Some of the many resources we share are http://www.suicidepreventionlifeline.org/ and http://www.7cupsoftea.com/.

David The most jarring line is that one in the final paragraph:

Suicide prevention is something we take very seriously, yet as a society still know surprisingly little about.

In fact, the risk of teen suicide following anonymous bullying is something we as a society (and an industry) know all too much about.

Perhaps if Byttow really wants to understand more than “surprisingly little” about the damage being done by his app, he could start by listening to those trying to tell him.