According to one estimate, 22 percent of downloaded apps are only used once. Therefore the push notification has become a great way to retain users so your app doesn't become part of this silent majority.

But according to a new report from the engagement marketing firm Kahuna, less than 45 percent of users in some product categories, including Social and News & Media, opt into push notifications. Other categories, however, like ridesharing, enjoy push notification opt-in rates of over 75 percent. 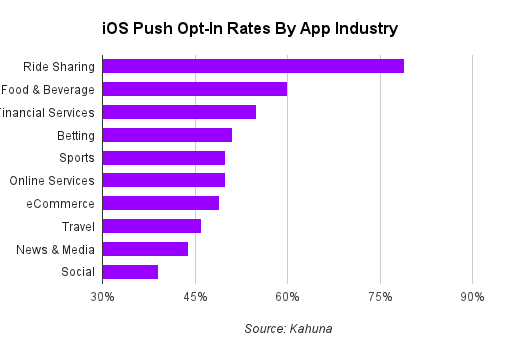 Which makes sense. Ride sharing or food apps only blow you up with a notification when your car or food is arriving. Social and news apps, however, are constantly updating. Social media users are pretty narcissistic, but they don't need to know immediately every time a person "likes" their photo (either that, or they already check their phones for Facebook notifications incessantly and don't need to be notified).

So how can apps from losing categories boost their push notification opt-in rates?

The authors of the study offer a few suggestions. First, developers should clearly communicate the value of push notifications as soon as the user downloads the app. Second, apps can afford to be a little pushy when asking users if they'd like to receive notifications. If the user says no on the default iOS notification page, it's okay to ask the user again later. After all, when users first download an app they may not even be certain they want to keep it, let alone get buzzed by it regularly. And finally, the authors stress that once a user does opt-in, it's crucial to not waste that user's time and to only send "hyper-targeted, personalized, push messages."