But the latest product from Beats cofounder Steven Lamar embraces the label wholeheartedly.

Allow me to explain: ROAM Ropes are designed to be worn wherever you go as a fashion accessory so they don't get lost or tangled in your pocket. When not in use, they're draped around the shoulders. I know, it sounds a little bit like something out of a Tim & Eric sketch. But Lamar, who knows a thing or two about turning audio accessories into fashion statements, is confident that the earbuds' subtle design, comfortability, and headphone-quality sound will make it a favorite among anyone who listens to music on the go, not just audiophiles.

The secret sauce, so to speak, to making Ropes sound as good as big bulky headphones is a pendant the listener wears around the neck. Not only is it a control panel for the earbuds, connecting to your smartphone through Bluetooth and allowing listeners to personalize the sound through EQ adjustments; it also houses the kind of sophisticated drivers and electronics normally reserved for headphones, but generally unused in earbuds because they are designed to be lighter and more disposable.

"Look at the innovation that's gone into your mobile devices over the year," Lamar says. "Where's the evolution in headphones and earbuds? Something so basic like personalizing the sound in them?" 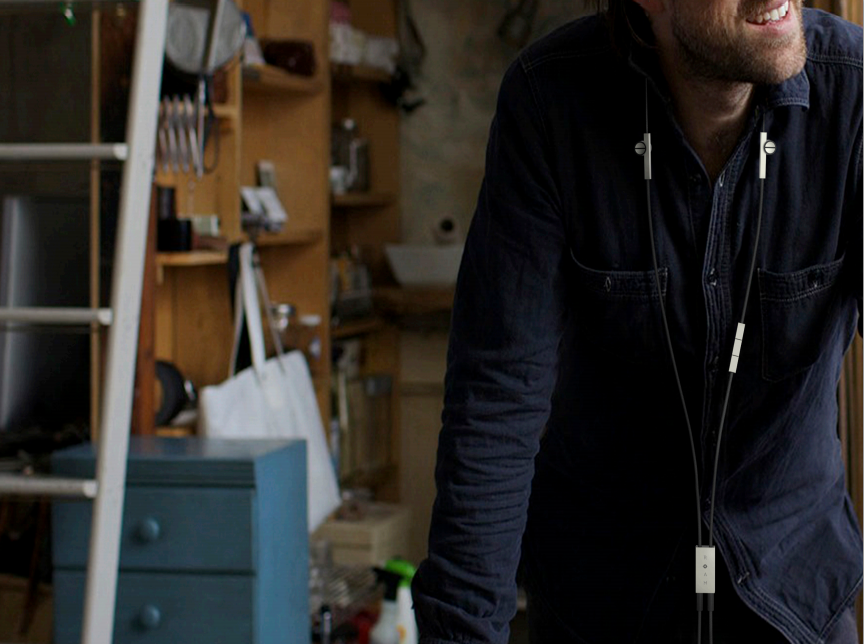 Lamar isn't targeting any particular demographic of audiophile or fashionista -- he wants to take on the entire earbud space, which he says makes up 60 percent of the $8 billion market for headphones. That won't be easy considering the sticker price of $299 -- For my part, I've never paid more than $20 for a set of earbuds. Then again, most people are accustomed to buying new earbuds as often as once a month, seeing as how they're misplaced about as often as dirty socks.

The disposability of earbuds isn't the only behavioral challenge the company will have to overcome. There's also the stigma of being a "wearable." Even though all earbuds are technically wearable, Ropes are designed to be worn and used in the same way as, say, a smartwatch -- always on and visible when out and about. And the wearables market, despite enormous amounts of investment and interest from VCs, has struggled to gain a strong consumer foothold, particularly among young people. Lamar acknowledges this challenge, but doesn't think it's insurmountable.

"I think if you give [consumers] a cool sleek-looking Apple-esque design, and you marry that with great sound quality and this personalization aspect, that's going to get the behavioral change," Lamar says. "A wearable for my earbuds -- that's kind of practically functional. That's not a wearable just to make it a wearable. It's a wearable because that's the function we want to use."

Ropes' first major marketing push is an intensely personal one for Lamar. The earbuds will be featured in the Stand Up For Cancer telethon which will air tomorrow on all four major television networks and more than two dozen cable stations. Lamar, whose wife died of cancer last year, says the organization played a crucial role in helping his family through the diagnosis and treatment.

"[Stand Up For Cancer] is one that's been near and dear to our hearts at ROAM because of how good they were to our family," Lamar says. "They're just a wealth of knowledge in the field. You want to know where you go to get treatment, you want to know who to talk to about surgery, you want to know anything about how to deal with this disease, they're incredible."

ROAM will also donate $100 to the organization for every special orange-branded set of Ropes it sells through the end of 2015, with a minimum commitment of $10,000.

Disrupting the headphone market like Beats did is one thing. People were already spending hundreds on headphones. And by attaching a beloved hip-hop star to the brand, it added a sense of cool fashionability to the product no matter what they sounded or looked like.

But disrupting earbuds, which most people think of as cheap and disposable, will be a lot harder. Lamar says he has a lot of promotional partnerships he's not ready to talk about yet, but I would think that celebrity endorsements are the most logical route to take. After all, say whatever you like about whether Ropes are fashionable or not -- fashion is fickle. And if a Beyonce or Kanye is caught wearing Ropes, then it doesn't matter if they look ridiculous to me or you.