"I'm engaged!" How to fool Facebook's algorithm and top all your friends' News Feeds

If you don't know by now, what you see on your Facebook feed is not a raw collection of everything your friends and the brands you follow share. The company uses an algorithm to highlight stories it predicts each user will most want to see, based on what that user comments on or likes.

You might expect it to work pretty well, too -- After all, Facebook's data team is constantly tinkering with it. Sometimes the algorithm is tweaked in relatively trivial ways, like when Facebook began to favor posts that included a visible URL in the description. Other times, the tweaks threaten to cause real emotional distress in users, who Facebook apparently thinks of as lab rats.

But despite the fact the impressive computing power of these algorithms, and the turmoil publishers feel as they try to appease them with kittenbait and quizzticles, robots are dumb. You can fool them. Just look at this post I found in my feed from Margarita Noriega, Head of Social at Fusion: 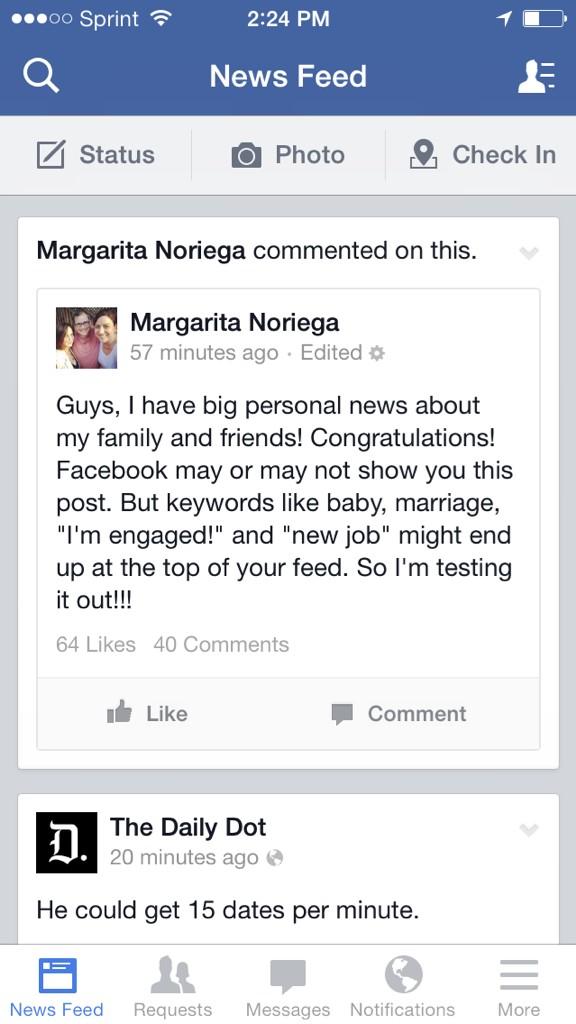 Even though the post came in 57 minutes earlier, it wouldn't leave the top slot on my feed no matter how many times I swiped. (An hour and a half later it's still shows up in the second slot). Granted, the fact that it's a clever post that compiled a very high number of likes in a short period of time, particularly for a non-"brand" ("But aren't we all brands?" he whispered into the abyss...) may have played a role in its prominence in my feed.

Nevertheless, there's a distinct possibility that, like more primitive versions of Google's search algorithms, Facebook's News Feed is just easy to fool. It's something Twitter should keep in mind as it begins to carefully tread on algorithmic territory.