Does Obama know about his LA host's ties with gross "women are targets" pickup artists?

'"Since the very beginning of the administration, the President and vice president have made it a top priority to end sexual assault. Today, one in five women is sexually assaulted while in college," senior Obama officials told reporters on a conference call.' -- CNN

"Whether you’re into younger women, hot Asian women... girls at your college... Mack Tactics has got you covered." - Mack Tactics

On Thursday, according to press reports, President Obama will visit LA for a series of events including a speech on income inequality and, in awkward contrast, a $34k-a-ticket fundraiser at the home of Gwyneth Paltrow.

Of all of Obama's LA events, the income inequality speech seems the least controversial. Or at least it would be were it not being hosted at Santa Monica co-working space, Cross Campus.

As I've reported before, the CEO of Cross Campus, Ronen Olshansky, was previously a co-owner and officer of Macktactics Management LLC, set up to promote a pickup artist course titled "MACK Tactics: The Science of Seduction Meets the Art of Hostage Negotiation."

Today, Macktactics.com points to a gross-but-unremarkable "dating tips" website but, when Olshansky went in to business with the site's authors, it had one purpose: to teach men how to use the methods of police hostage negotiation to pick up women. (If you have a strong stomach, you can find most of the previous versions of the site on Archive.org)

The Mack Tactics course was written by former Las Vegas cop Chris Curtis and references other negotiation manuals with titles like “Getting Past No.” It also details Curtis’ rule of reciprocity: how, when a “MACK” does something nice for a woman it is reasonable to expect something in return.

Co-written by a former top Hostage Negotiator, it will show you in detail how the principles of hostage negotiation can be applied to the dating game. Just as the Negotiator builds a bridge of trust with the hostage taker, becoming his “fellow traveler” and working towards a solution, the Mack understands how to form quick, effective connections with women and guide each encounter towards his desired outcome.

"When you're a negotiator, the way to speak to people is drilled into you. It becomes natural," Curtis explained to Karyn Miller from London’s Daily Telegraph. “You don't ever say to a woman, 'Let's go back to my place.' Women don't want to seem easy. Instead, suggest there's something you want to share with her, like a CD you talked about or a bottle of wine."

Banners for Mack Tactics promised: "Free Seduction Training Course Shows You How To Read Her Mind & Get In Her Panties." 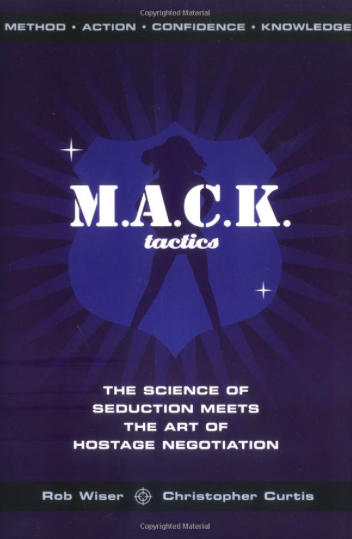 Today Olshansky and Curtis have taken steps to distance themselves from Mack Tactics. The site is apparently now under new ownership and Macktactics Management LLC appears to have been dissolved. Stunningly, Curtis has since been hired by (Pando investor) Tony Hsieh to be in charge of women's safety in Downtown Vegas (No, really). Olshansky went on to found Cross Campus and invest in several tech startups.

In fact it was at Cross Campus where I first encountered Olshansky, and first got a hint that his journey from pickup artist entrepreneur to well-adjusted human being might not be entirely complete. Back in 2012, Pando hosted a PandoMonthly event at Cross Campus LA during which Olshansky behaved so disrespectfully towards female Pando employees that my subsequent email telling him to back off made it on to the front page of Gawker. It was only later, when I discovered Olshansky's connection with Mack Tactics, that his attitude towards women started to make some kind of gross sense.

Still, for all my efforts to report on the "mack tactician" lurking at the heart of the LA startup ecosystem, the news clearly hasn't made it as far as White House.

At least I have to hope the President's staff didn't realize that, in a few hours time, their boss -- a President who strengthened and reauthorized the Violence Against Women Act, and is a father to two young daughters -- will be hosted by a man whose previous company promoted the idea of women as "targets" and advised that "every encounter with a woman is an opportunity."

I emailed Cross Campus a couple of hours ago for comment on this story. So far they haven't responded.