News site comments sections are usually dominated by trolls and spambots. But over at a CBS local affiliate website in San Francisco, a dispute is playing out that involves possible criminal charges and one of the highest-valued companies in the Valley.

Over the weekend, a San Francisco Uber driver allegedly pulled a woman from his vehicle and smashed her phone following a dispute over directions. The man was cited by police for battery, malicious mischief, and vandalism, and Uber has suspended the driver ahead of an investigation.

"I put my head down and was texting," the victim told KPIX, "and the next thing I know we’re stopped and he’s running to my side of the car cussing, telling me to get the f out of his car.  He grabs my arm, I take that hand and I hold it up with my phone to take a picture.  He lets go, grabs the phone and throws it down the street."

But now, a man claiming to be Martin Hynek, the 39-year-old Berkeley resident behind the wheel that night, has taken to the comments section of KPIX in San Francisco to defend himself. (I've embedded screenshots of the discussion below, in case the comments are deleted.)

In the commenter's version of events, the rider asked to be driven to "Clay Street," but did not provide an address or cross street for Hynek to enter into his GPS. After asking repeatedly yet "politely" for the destination, the rider refused "about five times."

"At that point," the commenter writes, "she got very upset and she started telling me about how people like me should not be driving for not knowing the city, etc,...At this point the whole situation got very dangerous. there was heavy traffic, the lady repeatedly refused to give me the end location and she got really upset and even aggressive."

The commenter says he pulled over near some police cars and asked the rider to leave. He says the rider refused until he said he was going to call the police. At that point, he says, the rider exited the vehicle on her own volition and yelled to get the attention of the police officers.

The officers then allegedly asked the driver to exit the car and wait while they spoke to the rider.

"They did not talk to me at all," the commenter says, "besides asking me briefly at the beginning of what happened; I told them I asked her to leave my car for being abusive and that is all."

Finally, the police handed him a ticket, advised him of a court date and, in the commenter's words, "they said that it is she say/ he say situation and that I can explain all this to judge. They wished me me safe driving and I left."

That's obviously a far cry from the statement the victim gave KPIX. But now, a commenter named "nicki" who claims to be the passenger has joined the fray and, regardless of whether it's really the rider or not, she puts forth one of the smartest, most balanced arguments I've seen regarding the issue of ridesharing safety.

First, she strikes down the accusations made by some commenters that she was hired by a taxi company to make up the story, or that she made it up just to get a new iPhone. She doesn't want the man to be "arrested," but nevertheless, she offers a detailed explanation for why stories like this, assuming it's true, are so important to bring to light. She also writes a brilliant takedown of all the Internet commenters who downplayed the event or attacked the victim:

Yes, the driver grabbed my arm AS he was yelling and cursing at me to get out of his car. Do I, personally, believe he should be arrested for that...no. Yes, when I tried to photograph him doing this, he let go and grabbed my phone, throwing it down the street to avoid being documented assaulting me...hence NO proof. Do I, personally, think he should be arrested for that....no. Jail is better used for more severe crimes. What I DO think should happen is what IS happening...him being taken off the drive list and awareness that things like this ARE happening. No one should be allowed to drive anyone else around if they feel it is ok to touch them or their property. It's people like the ones of you making negative comments about me that cause these incidents to not be taken seriously.

Near the end of the comment she writes, "I have given some attitude to some taxi drivers and probably some uber drivers, over directions, in my time...and they have and are allowed to give it right back. What neither one of us is allowed to do is get physical....PERIOD."

Who knows if "nicki" is really who she says she is, but good for her for getting to the heart of why these stories, even if they're less intense than the tales of kidnapping or high speed chase, cause anxiety for riders. 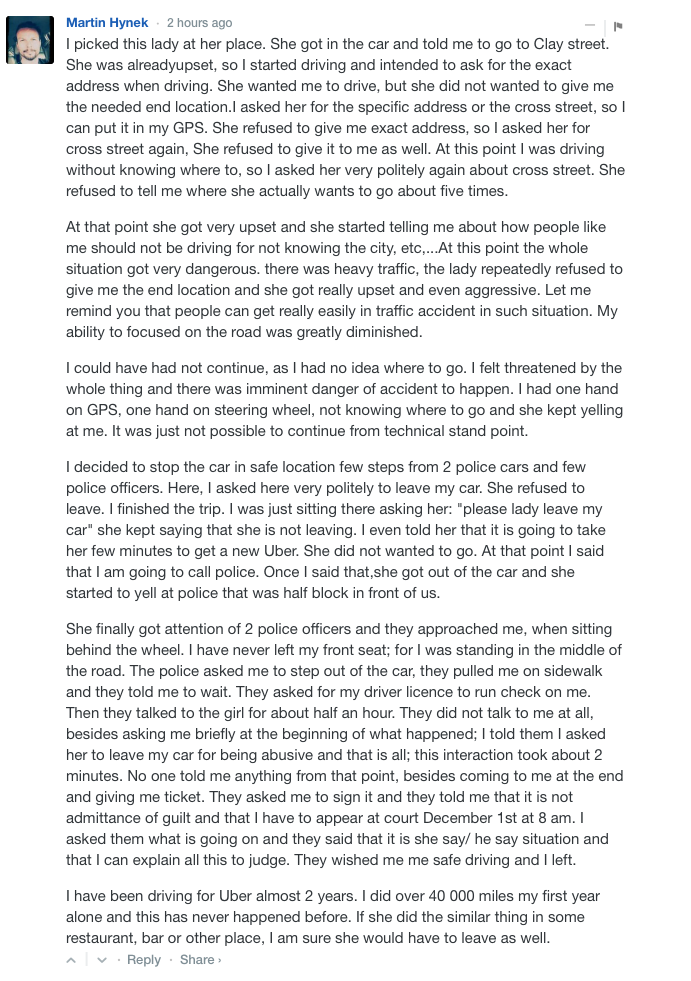 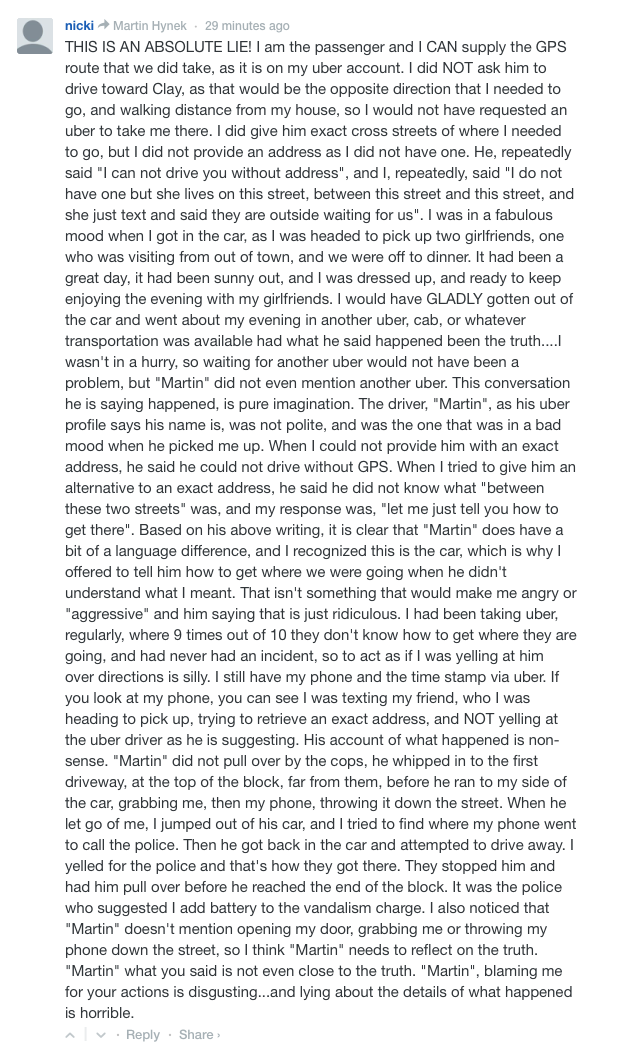