Today, the New York Times published an investigation into the cover-up of an apparent hit-and-run incident perpetrated by the starting cornerback on Florida State University's football team. According to the Times' reporting, P.J. Williams drove his car into an oncoming vehicle before exiting the scene. The accident, though initially classified as a hit-and-run, was later removed from the police's database and Williams, though driving with a suspended license and suspected of a criminal act, only received two traffic tickets for his alleged offense.

It's a blockbuster story exposing corruption and favoritism at the number 3 ranked college football program in the country and the defending National Champions. So why is it that when I clicked on a link to the story on Twitter I saw the following message? 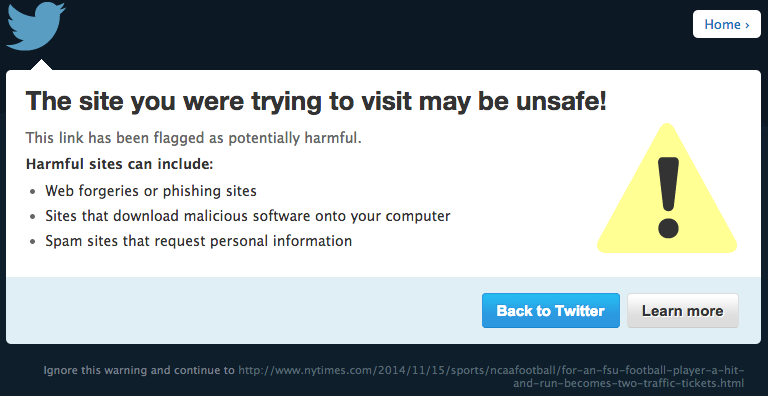 Because according to multiple NYT staffers, Florida State fans have been flagging the story as spam on Twitter to discourage users from seeing it.

Too bad the gambit likely backfired. I didn't see anything about the story on social media until outrage began to stew over the FSU fans' scheme. In fact, the story may have otherwise gone the way of so many other pieces of investigative journalism in the social age, lost in a sea of Taylor Swift thinkpieces and galleries of Kim Kardashian's posterior.

So congratulations, Florida State University. In a classic example of the Streisand Effect, what may have gone unnoticed on a Friday afternoon has now become more than a story about NCAA cover-ups, which sadly have become so commonplace that they are often ignored. It's become a story about the dangers of fanaticism and the imperfect ways in which social networks police content, garnering the attention of plenty of folks who wouldn't normally care about football or Florida State.