Last night, Buzzfeed's Ben Smith revealed a plan proposed by Uber executive Emil Michael to dig up dirt on journalists -- specifically, our editor-in-chief Sarah Lacy -- who have been critical of the company.

The statements, in which Michael suggested that Uber could "prove a particular and very specific claim about [Lacy's] personal life," were as appalling as they were stupid. And appropriately, Michael apologized for the remarks, and Uber CEO Travis Kalanick condemned them in a series of tweets.

But will apologies and condemnations really lead to a change in the "asshole" culture at Uber?

A now-deleted tweet by Uber's General Manager in New York City, Josh Mohrer, suggests the answer may be no. Earlier this afternoon, Mohrer tweeted a picture of some happy-looking members of Uber's New York office with the caption, "Shake it off @Uber_NYC style. #HatersGonnaHate." 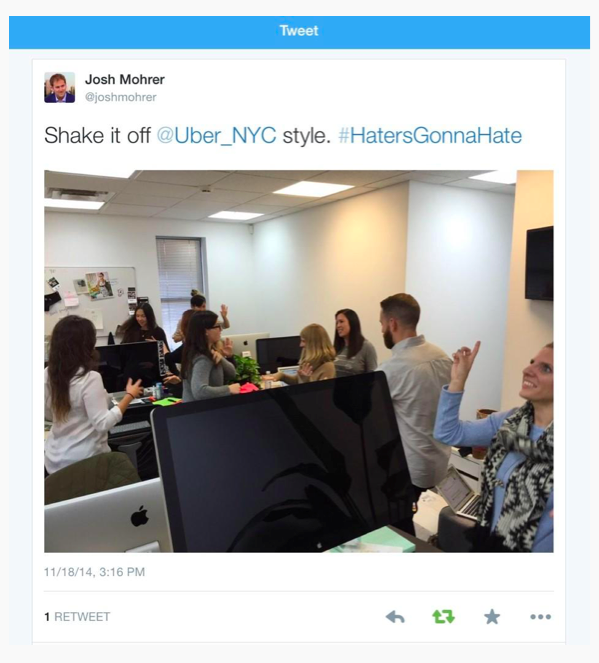 [I reached out to Mohrer by email prior to publishing and have not yet heard back. I will update the story if I do]

"Shake if off," as you may or may not know, is a reference to a Taylor Swift song about gleefully "shaking off" unfair criticisms people lob your way. "Haters gonna hate" is a popular phraseology applied to similar effect -- only here it's used to label the tech community's near-unanimous scorn for Michael's comments as indicative of some vendetta, or perhaps jealousy, toward the $18 billion company. It's a familiar tactic -- Label your critics, whether their critiques are legitimate or not, as catty negative trolls who have simply been drinking too much haterade.

Look, I'm sure there are plenty of Uber employees in New York and elsewhere who found Michael's comments disgusting and embarrassing, and who would like nothing more than to put this controversy behind them and get back to work as quickly as possible. But publicly dismissing the controversy as insignificant is not the way to do it. And when the head of one of Uber's largest markets doesn't seem to understand that, it makes Kalanick's promises "to be a positive member of the community" that much harder to swallow.