Ordinarily, guns don't make me feel relaxed. This past Wednesday, however, as I waited in a glass-walled conference room for Sarah Lacy to finish an interview with Bloomberg's Emily Chang about Uber's plan to smear her and other journalists, I took comfort knowing that the man hired to protect Sarah -- an off-duty agent for a federal agency I won't name -- was armed to the ears.

As a fan of movies like In The Line of Fire, and TV shows like the West Wing, I admit I'd always thought that having a bodyguard would be cool. Fun even.

Nothing about this past week has been fun. Nothing about hearing Sarah receive briefings on where she can't go, or what she can't do; or trying to explain to her young children why big men will suddenly come running if they open the wrong door in their home... none of that stuff is cool like it looks on the movies. Security doesn't make you feel big or important, it makes you feel small and helpless.

I've been given several good reasons why I should not go into the specifics of Sarah's new security arrangements, or why better qualified people than her or I have deemed them necessary. I'll simply say this: Sarah once travelled to Nigeria without security while heavily pregnant and was held hostage by a gang of machete wielding men. She has toured Rwanda and the favelas of Brazil similarly unprotected, and one of the biggest fights she and I have ever had was when she told me she was traveling back to Nigeria, against State Department advice, in a week when Boko Haram had made specific kidnap threats against American travelers. Sarah is, as the kids might put it, a badass. But this week, my fearless best friend and business partner has been whisked between appointments in San Francisco by one or more highly trained giants with guns. If, with all that context, you still doubt the seriousness of what Sarah and her family are dealing with this week, there's little point in me trying to convince you.

The natural instinct when you feel threatened is to hide. It takes remarkable strength of character to appear on television and talk about being scared, and even more strength to keep talking when people close to a multi-billion dollar corporation are yelling at you to shut up. And yet, that's what Sarah has done this week, to make the point that Pando will not be cowed from reporting on Uber, or anyone else.

You might disagree with her decision to keep talking. You might think she's exaggerating the threats against her. You might even smugly insist that Pando is stoking this story for pageviews (for what that's worth: the sum total of all our Uber-related traffic this week is less than I attracted in a single day when I wrote about a billboard on Mission Street). But what nobody watching that Bloomberg interview could say is that Sarah looks happy that her family is being threatened. Or so I thought.

Shortly after the interview aired, a dude by the name of  Lane Wood posted an essay on Medium entitled "Here ego again." In it, Wood accused Sarah of actually enjoying talking about her children being in danger.

Sarah was wronged. But seeing her on Bloomberg smiling while talking about her kids being in danger makes me feel like I’m watching an episode of The Mentalist. She’s saying she’s terrified… but at the same time she seems to be enjoying this newfound attention.

After admitting "I can't know her intentions," Wood proceeds to explain that...

...the reality is, this story helps her personal profile and it boosts readership for her company, Pando Daily. Sarah’s a media master. She’s winning, even as she plays the part of a victim. And that duality bugs me- much more than investor disclosures.

As I read Wood's words, I felt like I'd been transported back to the bad old days of the blogosphere, before we all came to understand that victim shaming women who speak out after being threatened is something that only total, total scumbags do. Sure enough, Wood's post quickly appeared on Techmeme and became a rallying point for a small gaggle of Uber supporters and investors who, unable to defend the company's behavior, could at least use it to suggest that Sarah was being unseemly -- dare I say, unladylike? -- in talking about it. More than one person on Twitter used the word "hysterical," and already the Gamergate trolls are crawling out of the woodwork to suggest that, really, this is all about ethics in journalism.

Wood's victim blaming post would be vile enough if Sarah had actually appeared upbeat or confident when she talked about her children during the interview. To suggest that Sarah, who I've watched go through the most frightening week of her life and whose kids had to be accompanied to "Yo Gabba Gabba Live" by huge men with earpieces, is "play[ing] the part of a victim" is just grotesque. Moreover, the idea that there is a prescribed way for a woman who has been threatened by a multi-billion dollar corporation to look or speak is just the sickest kind of mansplaining. What Wood is really saying is that, if Sarah really cared about her children, she wouldn't be on television talking about Uber, she'd be hiding at home, staying silent. A good mother would go the fuck away and shut the fuck up.

But here's the twist: Sarah didn't seem upbeat at all. You only have to watch the Bloomberg interview to see that Wood's claim that Sarah was "smiling while talking about her kids being in danger" is absolutely, 100% false. In fact she looks horrified. At times you can hear the fear in her voice, even though there's a guard with a gun sitting six feet away.

Wood didn't link to the video of the interview in his post, nor did he embed it, presumably in the hope that you wouldn't bother trying to find it. Instead he simply pasted a screen grab from a completely different part of the interview, showing Sarah apparently smiling, with the caption... "I'm terrified - Sarah Lacy". 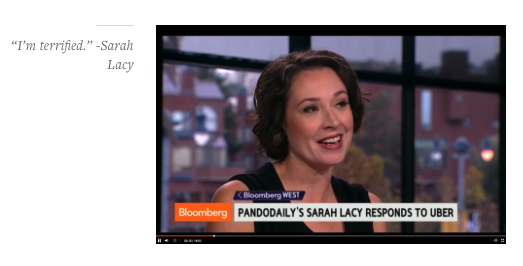 But now here's the full video. Sarah talks briefly about her safety from 3:00 mins. Watch it, and tell me if you see someone who seems happy at what's happening to her and her family.

I wasn't the only person to be disgusted, and baffled, by Wood's post. Robert Hof, former Silicon Valley Bureau Chief of Business Week, wrote:

AOL's Ryan Block shared his own experiences of being threatened: 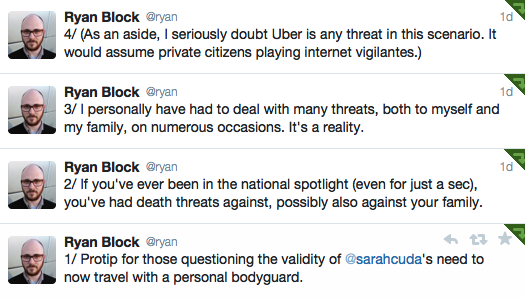 While others were just revolted:

I read and reread Wood's words, trying to figure out his motivation for misrepresenting the interview, and victim-shaming Sarah. My first clue that something darker might be going on was in the second paragraph:

To the matter at hand. Uber. Sarah Lacy. Et al. It seems that most people agree on the basics… Emil made a very dumb comment. Uber has serious PR issues as a massive consumer company (I remember wishing I could write their emails for them when they were launching in NYC and seemed to keep putting their foot in their mouth).

It's slightly odd that Wood never refers to Emil Michael by his full name. Throughout the post, he's just "Emil," as if the two are on first name terms. It's also curious that he recalls wishing he could help Uber out with the communications strategy in the past. That desire had a strange echo of something one of Emil Michael's friends, Nicole Campbell, wrote on HuffPost as part of Uber's damage limitation strategy:

I overheard Ben say that he was hoping that Travis would give him a libertarian answer. At that point, I wanted to grab Emil. I kind of knew what Ben was up to.

But Campbell's post carried a disclaimer that she was friends with Emil Michael and had worked with him at the White House. Many of those who responded to Campbell felt that relationship prevented her from being an impartial commentator on the events. Wood's post had no such disclaimer: Nothing whatsoever to suggest any ties to Uber or Emil Michael.

But then a tweet from Maria Chong pointed me towards a very, very important detail that Wood had, for some reason, forgotten to mention.

It turns out before taking up his current gig at something called "Humin," Lane Wood worked as entrepreneur in residence at Sherpa Ventures. Sherpa, of course, was an early investor in Uber and their co-founder, Shervin Pishevar, is very, very good friends with Travis Kalanick. Here's Wood's old boss, bro-ing it out with Kalanick a few years back... 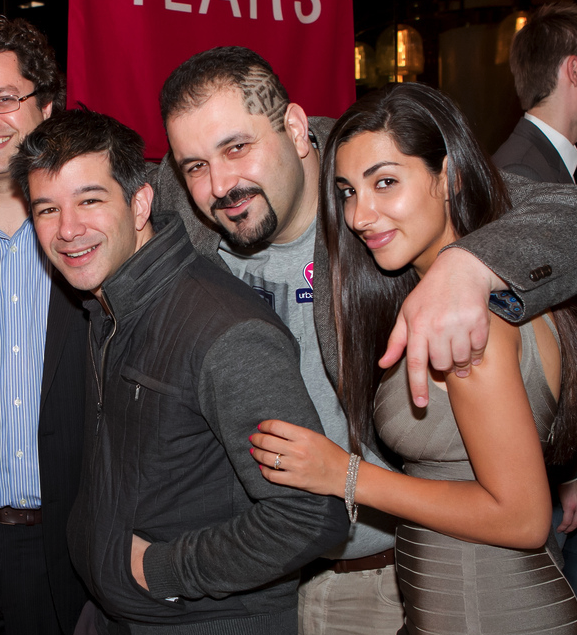 (Pishevar, it should be noted, is also an investor in Pando. A fact that makes me feel deeply queasy after everything that's happened this week)

In case there was any doubt that Wood's involvement in Sherpa brought him into contact with Uber executives, Wood's Twitter feed is full of references to his friends at Uber, including CEO Travis Kalanick and Uber head of global operations, Ryan Graves.

So, not only did Lane Wood previously work for one of Uber's highest profile investors (and one of Travis Kalanick's best friends) but he is also personal friends with Uber's two most senior execs, Kalanick and Graves. In fact, Wood and Graves have been "bros" since at least 2011... 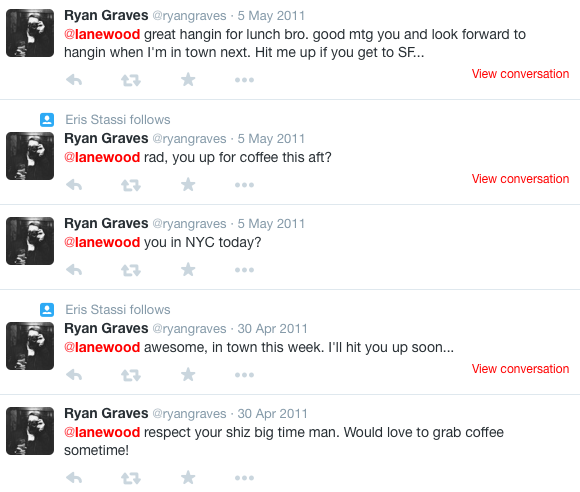 And yet, without disclosing any of those conflicts, Wood wrote a blog post in which he presented himself as an impartial observer and portrayed Sarah as a horrible mother who is only play-acting the part of victim in order to make herself more famous. A post which Uber supporters and the worst kind of misogynist Internet trolls alike are using to reframe Sarah as a hysterical faker. Are you feeling sick yet?

Earlier this week, I wrote about how Uber's smear machine is still running at full power. I don't know if Wood's post is Uber trying another tack -- returning to their plan of smearing the messenger by calling Sarah a bad mother and a publicity whore -- or if he decided entirely independently to help out his old pals Travis and Ryan and his old boss Shervin. I asked Wood yesterday morning why he failed to disclose his ties to Uber in his post but he hasn't responded.

Here's what I know for sure: Uber's Emil Michael boasted to Buzzfeed's Ben Smith that he would plant stories about Sarah in the media to discredit her, and that he would "go after" her personal life and her family. When asked how Uber could do that without making the company itself look more sleezy, Michael responded with six words, quoted on the record by Ben Smith:

"Nobody would know it was us.”

Update: Shortly after this article was published, Wood updated his post to acknowledge that he does in fact "know a few people at Uber." He still doesn't disclose, however, that those people include the company's CEO and second most senior executive, who he has previously described as "friends" and "bro"s.

Given the attention that this post has received, I want to make it clear that while I do know a few people at Uber (San Francisco is a small world), I did not speak with or consult anyone affiliated with them (team members, partners, investors etc) before publishing. Over the course of three short months before joining Humin in 2013, I worked with Sherpa Ventures (an Uber investor) as an entrepreneur in residence, working only with seed investments (Humin being one of them), and never discussed Uber.