Um, why did the Wall Street Journal cut Obvious Ventures' one female member out of a photo?

Today marked the launch of Obvious Ventures, a new venture fund led by Twitter and Medium cofounder Evan Williams. Its mission is to invest in "world-positive investing." Sounds like a nice company! And certainly Williams' startup pedigree alone warranted its coverage by a number of tech publications.

But while every story on the launch was basically the same lightly rewritten press release with the same photo, the Wall Street Journal's version was unique in one very notable way: It cropped the one female founding member out of the photo. 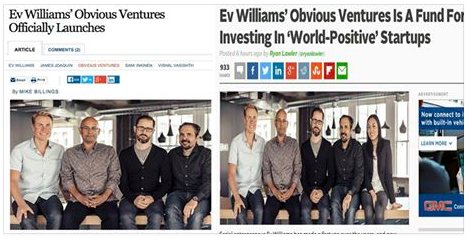 The Journal has since restored Virginia Sapp, the company's operations manager, to the photo. And credit the outlet for transparency -- it added a note to the bottom of the page stating that an earlier version of the story had omitted Sapp.

Nevertheless, there's no explanation for why she was removed. It was probably done by some photo editor, but how come? Upon browsing through stories in that vertical, they feature a variety of different photo sizes and shapes. Yes, it was probably an honest mistake, but that doesn't mean there weren't implicit biases informing that decision. Why not cut out the guy on the left, for example? He looks like a member of the Swedish Olympic swim team, not a startup dude right?

I'm kidding of course, but you get the idea. These biases exist and they're often difficult to avoid. And so the more we keep them in mind, particularly in the tech world which is overwhelmingly male, the better.