"According to speaker Dan Lyons—who is the Marketing Fellow at Hubspot and a high-profile former journalist—marketing and media are colliding. They are becoming one and the same." - Blurb on website for Dan Lyons' speaking agent

'My first thought was, "So you’re the bastards who are killing my industry." My second thought was, "Hey, are you hiring?"' - Dan Lyons on quitting journalism for marketing Earlier this week, I wrote about the recent job history of Dan Lyons, the new editor of Gawker's Valleywag tech gossip site.

Gawker announced the hiring of Dan Lyons, who made his name as “Fake Steve Jobs” before quitting journalism to work as a “marketing fellow” for startup Hubspot. He recently authored a book advising brands on how best to present their press announcements as news, and gives speeches on the same topic.

Most serious journalistic organizations might think twice before hiring a "content marketer" who literally wrote the book on how corporations can work with journalists. But, as I wrote, the move makes a kind of perverse, unethical sense for Gawker's bosses who recently admitted that idiotic comments by Valleywag's previous co-editor had cost the company over a million dollars in advertising. That loss prompted the firing of editorial director Joel Johnson and was followed by the sudden departure of the entire Valleywag team.

Also, for an organization that's obsessed with pageviews, who better to hire than a guy who's biggest success as a writer was also the ultimate SEO play: Generating traffic by literally pretending to be Steve Jobs.

The only catch is that Lyons' highly public conversion from journalist to marketing guy might make it hard to take seriously his reporting on the same companies who, just a few weeks ago, he was advising on how to secure favorable coverage.

Fortunately, just after my post appeared, Lyons -- a man who, again, made his name pretending to be someone he isn't -- apparently hit on a solution: He updated his website and professional bio to remove any mention whatsoever of Hubspot or his career as a marketer. 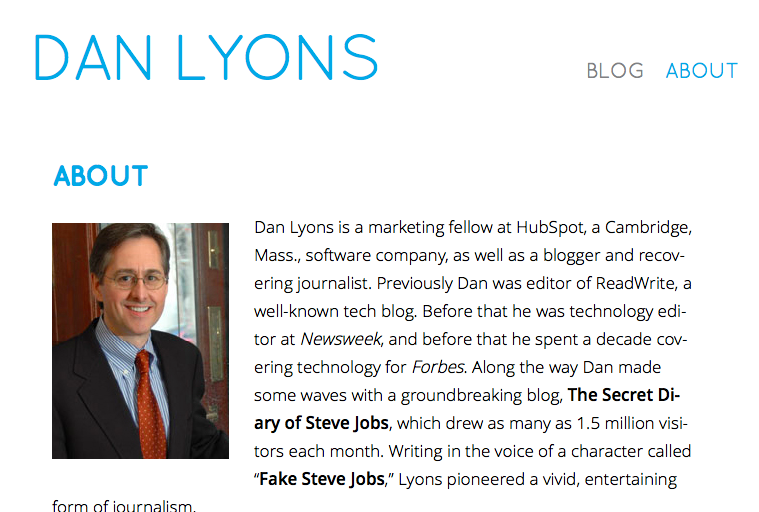 And here's that same bio, as it appeared on RealDanLyons.com this morning: 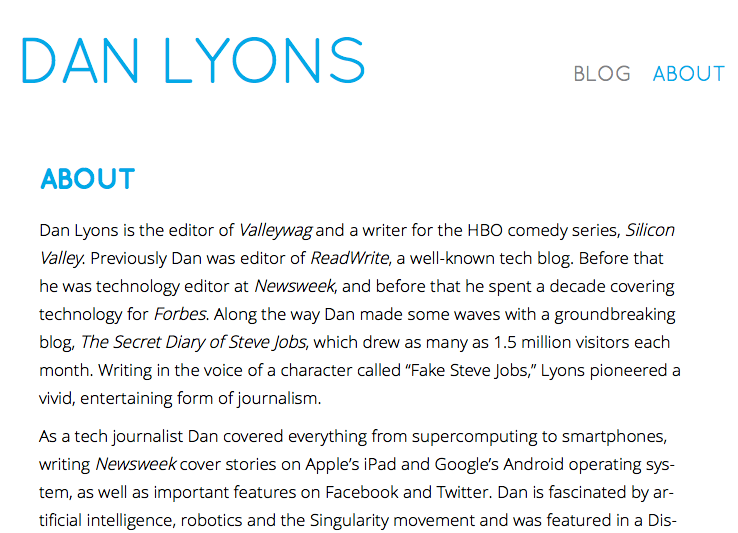 Lyons also deleted any mention of his "What is Content Marketing?" corporate speech from his speech topics page. Here it is last month: 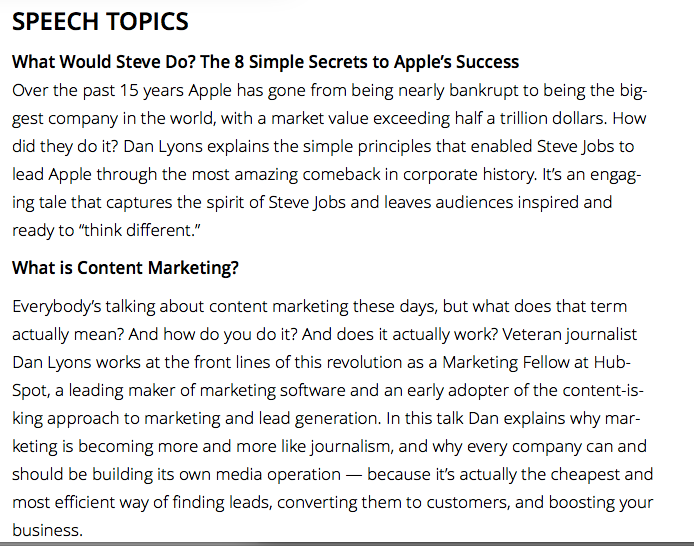 (His speaking agent is still advertising Lyons' availability to speak about "how you can use content marketing to boost your brand and generate leads.")

Of course, one can only imagine how Valleywag would respond if another journalist so brazenly tried to obliterate his career as a content marketer and lead-gen consultant. But, as I've written before, Gawker is nothing if not grotesquely hypocritical.

When I contacted Lyons for comment on his career revisionism, he explained the whole thing was an "oversight":

"I went in and updated my site and must have made an oversight... I haven't used my site in a long time and a lot of stuff is out of date."

He thanked me for the "heads up" and promised to return Hubspot to his bio.

It's unclear what Lyons means by "out of date." As the screenshots above clearly show, Lyons deleted the Hubspot mention after he added his new gig at Gawker. Moreover, forgetting an almost two year chunk of your career is a hell of an "oversight."

Hopefully Lyons' bosses at Gawker will keep an eye out for any future oversights in Lyons' reporting that just so happen to cover up gigantic conflicts of interest. We'll be sure to give him a "heads up" if we spot any.