The Racket, signifying nothing

"The Racket was cruising along with the kind of editorial independence only a billionaire can buy you. It had no immediate deliverables: no traffic goals, no revenue plan, not even an ad sales team. The only plan was to build an audience." - Mat Honan, Wired

Clearly, Honan's editors at Wired were hoping to publish a profile of the web's hottest new satire site, edited by Matt Taibbi, and backed by millions of dollars from eBay billionaire Pierre Omidyar. But then Taibbi flamed out and Omidyar shut down the entire project, leaving Honan with a journalistic dilemma: What the fuck am I supposed to do with these notes?

Like a thrifty old woman boiling chicken bones for stock, Honan decided to turn his visit to a Racket ideas meeting into a puff piece about how great the magazine would have been if only Pierre Omidyar hadn't pulled the plug. Its title: "The Guerrilla Tactics of The Racket, and How It Almost Upended Journalism."

“We’re just going to take over BuzzFeed Community Content for like a week and go nuts on it, and then disappear,” interjected Alex Pareene, The Racket’s deputy editor.

“Then we’ll go someplace else!” Taibbi shot back, excited now, as they started finishing each others’ sentences. “We’ll show up in the comments of somebody else’s site.” That, I grudgingly accept is a funny idea. It was funny when 4Chan did it a few years ago; it was funny when my old ezine, The Friday Thing, did it over a decade ago by taking over other sites' chat rooms; and it was definitely funny when people did it in the real world, and called it a flashmob.

What it isn't by any stretch is original or "upending," any more than a custard pie in the face is going to upend the circus.

But there was more:

“Yesterday I went to the occult bookstore in Bushwick,” said Pareene. “The guy who owns the shop throws runes. I wanted to get someone who reads animal entrails. We’re going to predict who is going to take the Senate with occult practices—we’re only going to use occult practices to predict things. Edith is also making us a Tarot deck.”

(This, by the way, is Edith Zimmerman's only mention in the piece, apparently reduced to the role of Taibbi and Pareene's props mistress)

Someone fetch a mop! Journalism has been upended!

We outsourced Thomas Friedman to an Indian content farm, where they produce for pennies a word, any kind of material you want.... “The joke here is that Thomas Friedman is always talking about the benefits of globalization,” says Taibbi.

Now that's funny. Now that's the kind of idea I wish a Pando writer would have come up with. Now that's...

Let's rewind back to the beginning of Honan's piece where he describes Taibbi's bona fides:

The Racket was to be a showcase for Matt Taibbi,the Rolling Stone reporter who made a name for himself running a newspaper in Russia before becoming one of the financial industry’s harshest critics.

Missing from that description, of course, is the identity of Taibbi's partner in the eXile: Pando's Mark Ames. Perhaps that's why the Friedman idea sounds so familiar.

Or perhaps it's because the idea was ripped off wholesale from when Mark Ames (writing as "Tamish Phreedman") published it in the eXile in 2004, two whole years after Taibbi left to become "one of the financial industry’s harshest critics." 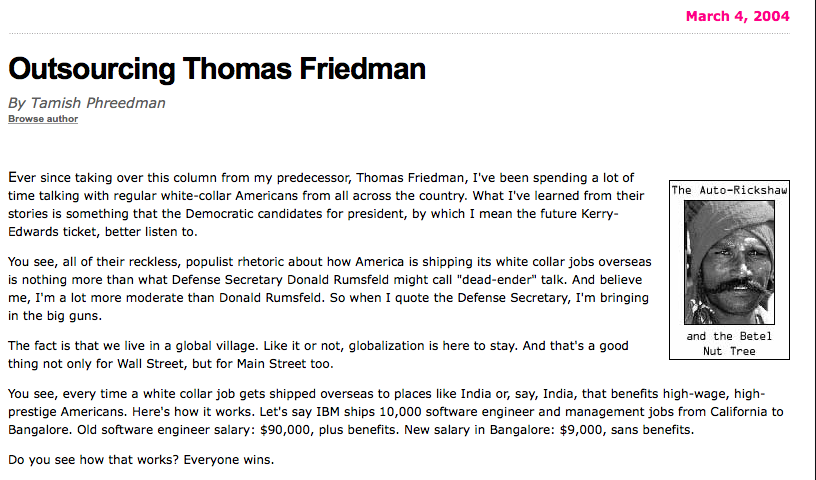 There are no original ideas. Not really. If Taibbi hadn't ripped off Mark's idea then it's likely someone else would have done it. Hell, it's possible Mark would have ripped himself off. Here's Mark in 2013, then still at my old magazine NSFWCORP, suggesting a different spin:

It doesn't really matter that none of the Racket's funny ideas was original and none of its original ideas was funny, nor is it hugely important that at least one of those ideas appears to be ripped off from a better, funnier writer. What matters is the laughable suggestion that the journalistic status quo was ever close to be challenged by Taibbi spitballing pranks in a fancy Manhattan skyscraper while Pareene chortled along, frantically clicking his Like button like some kind of millennial Ed McMahon.

Say it with me: Ideas. Are. Like. Assholes. In journalism, as in entrepreneurship, coming up with ideas is the easiest thing in the world for anyone with even half a functioning brain. The hard part, even if you have access to quarter of a billion dollars from the founder of eBay, is actually executing those ideas.

We don't give founders credit for the ideas they didn't get around to building and we certainly shouldn't celebrate a group of writers who -- despite being given months of time, the fanciest of offices and access to more money than God -- were unable to publish a single word.