While most people see the dawn of a New Year as a chance to make amends for past mistakes, and vow to do better in the months ahead, it's -- uh -- refreshing to know that not everyone buys into the tyranny of "being a better person."

In 2014, Uber's attitude towards women's safety came under intense scrutiny after several Uber drivers were accused of raping or otherwise assaulting female passengers. After Pando's Sarah Lacy wrote that she no longer felt safe taking Uber cars, a senior executive at the company threatened to spend a million dollars to do "opposition research" on her and her family.

Given the media storm which followed Uber's 2014 scandals, you might think that Kalanick would be doing everything he can this year not to look like -- as Seth Meyers put it -- "someone spray[ed] a can of Axe body spray into a suit until it became sentient."

Johnson, in case you haven't heard of him, is the controversial blogger who recently threatened to publicly name the alleged victim in Rolling Stone's U.V.A. rape story. Specifically he wrote:

I'm giving Jackie until later tonight to tell the truth and then I'm going to start revealing everything about her past.

Johnson has also been criticized for a series of racist posts about people killed by police...

He even once reported, seriously, that President Obama is gay.

That someone like Johnson should be one of the few people supporting Uber's behavior in 2014 should be enough to give Uber riders pause. 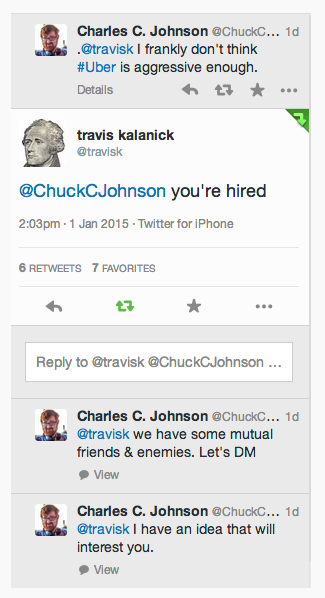 Even if we give Kalanick the extreme benefit of the doubt that he didn't check who Johnson was before he joked about hiring him, the response is mind-boggling in its callousness.

This is a company that has been forced to apologize time and time again for its aggressive behavior and for its willingness to hire (and not fire) executives who behave in ludicrously unprofessional ways. And here is Kalanick making clear that he agrees that, if anything, the company should be even more aggressive in 2015.

As the kids would say, Kalanick is clearly sorry, not sorry.

Shortly afterwards, once journalists like Kosoff started reposting the conversation, Kalanick and Johnson apparently deleted their tweets. Still, the message has already been received loud and clear: If you hoped that Uber would start behaving in an ethical way in 2015, or would at least start taking its problems seriously, you're out of luck.