Everything's not terrible! After a dismal 2013, clean energy investment hit a three-year high in 2014

Environmentalists -- or as they're more commonly called today, "people who care about the future of humanity on Earth" -- received some much-needed good news today. According to Bloomberg New Energy Finance (BNEF), global clean energy investment reached $310 billion in 2014, beating analyst projections and hitting its highest point since 2011.

“Throughout last year," BNEF Chairman Michael Liebreich said, "we were predicting that global investment would bounce back at least 10% in 2014, but these figures have exceeded our expectations. Solar was the biggest single contributor, thanks to the huge improvements in its cost-competitiveness over the last five years."

Indeed, the cost of solar power has dropped 60 percent since 2011, as researchers continue to hit new milestones in improving the efficiency of these systems. This followed a period where many high-profile solar companies went bust -- most famously Solyndra, which became a symbol among the American right of government waste and the supposedly lousy economics of clean energy. But as Technology Review's Kevin Bullis argued, this dramatic shakeout of solar companies was merely a sign of the sector maturing -- and the rebound of the solar industry bears that out.

As the solar industry became more healthy, however, overall clean energy investment had been slow to catch up. Between 2012 and 2013, global investment dropped 16 percent, even as official reports on climate change and rising temperatures grew increasingly dire. In late 2013, Liebreich wrote, “Governments accept that the world has a major problem with climate change but, for the moment, appear too engrossed in short-term domestic issues to take the decisive action needed.”

It appears now that governments are starting to put their money where their mouth is, particularly China, where investment rose 32 percent to a record $89.5 billion, leading the pack among all countries. United States came in second, where clean energy investment rose 8 percent to $51.8 billion, the highest annual haul since 2012.

In the wake of collapsing oil prices, the significant boost in clean energy investment may come as a surprise to some. But as Liebreich notes in his report, "2014 was too early to see any noticeable effect on investment, and anyway the impact of cheaper crude will be felt much more in road transport than in electricity generation."

So does all this mean venture capitalists and other private investors are back on the cleantech bandwagon?

Not quite. While VC and private equity investment in clean energy rose 16 percent to $4.8 billion, that number is still far lower than it was in 2008, when private investment hit a $12.3 billion high. Firms like Kleiner Perkins are still feeling the burn of cleantech's immensely high startup costs and slow returns. And while 2014 saw more private investment improvement over 2013, the increases aren't staggering, according to a separate report from PricewaterhouseCoopers. 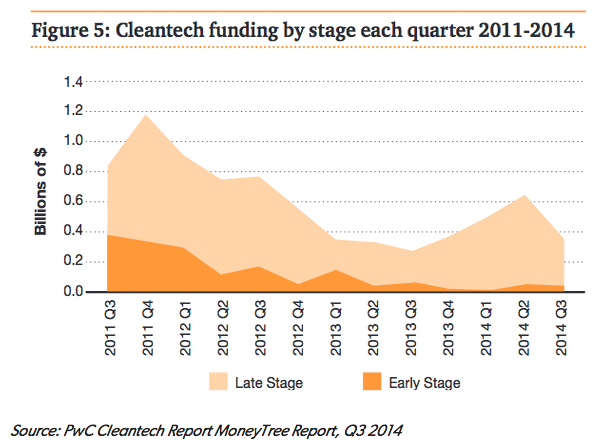 But that's not necessarily bad news for clean energy companies and their supporters. With total investment -- which includes public funds -- rising faster than private investment, it merely means venture capital may not be as crucial a factor in the clean energy market as investors like John Doerr once believed. Sure, that may create a cash crunch for newer, smaller startups that have historically relied on private investment. But many new cleantech companies have found ways to do without massive funding rounds.

A good example of this is San Francisco's Ohmconnect which, instead of offering expensive hardware or materials solutions, provides software that makes it easier for customers to make the most of their existing efficiency-focused products, like Nest thermostats and Tesla cars. Ohmconnect is off the ground with just $100,000 in outside funding, though its co-founder Curtis Tongue told me it will require more cash to expand to markets outside California and Texas.

For VCs, cleantech may never live up to its early promise. But based on these numbers, private investment is only one part of the larger financial picture. And as markets like solar mature, and governments continue to pledge their support -- and more importantly their cash -- toward renewables, "clean energy" will no longer be a bubble or a punchline or mere lip service. It will become a truly robust sector that maybe also saves the world.