If you're one of the five people still reading Gawker's Valleywag sub-blog, you might have been puzzled by a post earlier today by editor Dan Lyons.

In it, Lyons -- aka the guy who used to be Fake Steve Jobs before quitting to work in marketing --  complains that people are mad at him for changes he made to a post about Pando's Sarah Lacy...

Earlier today I put up a post about Evan Williams telling Sarah Lacy to "fuck off." I've gone in and changed that post a bunch of times after I originally hit "publish." I changed the headline. I changed the first paragraph. I struck out a few lines, and added some others. I took out some stuff that didn't read well, or was detracting from the post. I added a video of Jim Croce singing "Bad Bad Leroy Brown" at the bottom. And so on.Apparently this process of editing a blog post irks some people. How can you change a post after you've published it? There is, I'm told, some kind of sacred rule of blogging that says you can't ever change a word in a post once it has been published.

Eagle-eyed readers will note that Lyons doesn't provide any specifics about what changes he made to the post, or the headline, and why people might be upset. There's a good reason for that: The original post was UNBELIEVABLY SEXIST. That is, the kind of sexist that suggests Dan Lyons has been living under a rock for the past decade or more.

And here's the original:

Evan Williams founded Blogger, Twitter and Medium, and he honestly seems like such a nice, pleasant young man. Nevertheless, last week Williams told shrill harpy Sarah Lacy to "Fuck off," and now all of Silicon Valley is celebrating and hailing him as a hero.

Bolding mine, obviously. Not only did Lyons originally refer to Sarah -- an accomplished journalist, editor and CEO who happens to be a woman -- as a "shrill harpy," and hail Williams as a "hero" for telling her to fuck off, he also linked the word "celebrating" to a YouTube video of the Wizard of Oz song "ding dong the witch is dead."

I wish I were making any of this up.

Unsurprisingly, the backlash against Lyon's original post began roughly a nanosecond after it went live.

Even the corrected post gives us a glimpse into Lyons' gross #Gamergate soul: When called out for referring to Sarah Lacy as a "shrill harpy," he petulantly changed the description to "angelic role model and hero mom."

...because, to Lyons, a woman can either be a "shrill harpy" or a "angelic mom".  As Trey Allensworth wrote on Twitter: "Sounds to me like this fella gets his descriptive names [for women] from a deck of Magic the Gathering cards."

But Lyons kept on digging. Instead of apologizing for, or even acknowledging, his original statements, Lyons wrote a follow up post in which he tried to twist reader complaints into a debate about iterative blogging.

Here's the thing. This is how I work as a blogger. It's not how you work when you write for print, obviously. But to me part of the pleasure of blogging is that you can go back in and fix things and add things and keep working on something.

Yes, Dan, this is really a debate about ethics in tech journalism.

If this were the first time Lyons had written something disgusting about women, I might chalk it down to an out-of-touch old man having a bad day. But, as I wrote last week, Lyons has been making gross, sexist comments about women in tech, including Sarah, for close to a decade now...

Truth is, Lyons really, really hates outspoken women. Whether writing as "Fake Steve" or Real Dan, nothing gets his goat more than uppity dames, particularly those who dare to question "nice, pleasant" male CEOs.

That history makes it all the more odd that Nick Denton, who boasts of being a long-time Lyons reader, would hire him to take over from Sam Biddle, who famously lost Gawker $1m in advertisers after he attacked the sexists of Gamergate.

Certainly, if Denton was hoping that Lyons might win back that army of basement-dwelling women-haters, the strategy is backfiring badly. According to Gawker's publicly available traffic numbers, Valleywag now has even fewer readers under Lyons than it did when the site had no one writing for it at all... 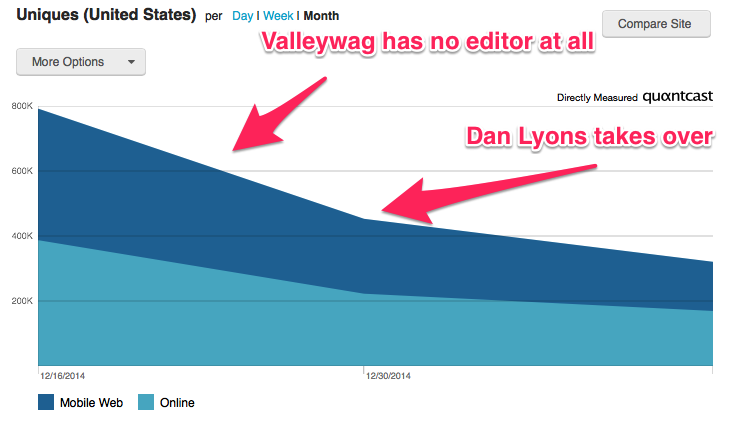 I emailed Lyons for comment this morning but he hasn't responded. Perhaps he's too busy watching old Benny Hill videos on YouTube.

[Illustration by Brad Jonas for Pando]