Launch Tennessee: This is why startups hate working with politicians

A quick update from Pando's department of public fights we really don't have time for...

Pando historians will remember that, last year, our flagship Nashville conference (then called "Southland") was produced in partnership with "Launch Tennessee," the state-funded regional development agency tasked with encouraging entrepreneurship in Tennessee. We were responsible for the on-stage content and guests, and brought in the vast majority of sponsors, and Launch Tennessee helped with logistics and fronted part of the cost.

This year's event -- Pandoland! -- is a solo production, with no involvement from Launch TN. Already it's shaping up to be a way better event (more on that soon!), with way lower blood pressure for our team. It turns out that there's a reason why startups generally hate doing business with politicians.

Now here's the TL;DR version of what happened after we ended our partnership with Launch TN:

After months of frustration and negotiation, the eventual split was, we thought, amicable. It certainly should have been amicable: We'd always made sure there was a clear contract that set out what would happen if we decided to end the partnership.

For one thing, neither side would be able to use the name "Southland" for future events. For another, Launch Tennessee agreed that, if they wanted to host a new event during the same week as the previous year's Southland, they wouldn't do so in partnership with another national media brand for at least twelve months. Given we were responsible for everything you saw on stage at Southland last year, we wanted to guard against Launch Tennessee deciding to partner with, say, TechCrunch on a new event and pretend that it was the same conference as before, just with a new media partner. 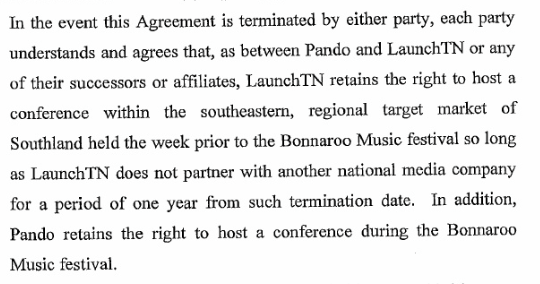 Unfortunately, for reasons we truly can't fathom, Launch Tennessee decided earlier this month to announce that their new event -- held the same week as last year's Southland, and described as the "successor to Southland" -- would be hosted in partnership with... yep... TechCrunch. That’s such a clear breach of our agreement, it borders on breathtaking.  (To be clear: We’ve spoken to the folks at TechCrunch and right now it seems like they're innocent pawns in all of this. This is categorically not a fight between Pando and TechCrunch.)

Pando is a startup and perhaps Launch Tennessee president Charlie Brock thinks we won't have the time or resources to force him to honor the contract he signed. The truth is, we certainly don't have the time, and we'd rather we didn't have to spend the money. Also, we were really hoping that 2015 would be the year we didn't have to have any ridiculous public fights. We just want to focus on making Pandoland the best event on the tech/entrepreneurship calendar, in Nashville or anywhere else. And yet, there's an important principle at stake here: When politicians and state-funded bodies promise something, it's reasonable to expect them to keep their word.

To that end, yesterday evening our attorney Roger Myers (who, famously, helped to get Wikileaks back online) filed a legal complaint against Launch Tennessee, asking them to stick to their side of the deal: To either move their event to a different date, or to wait a year before partnering with another national media company. That's it.

The whole thing is very inside baseball, and fast-growing startups have legal fights like these all the time. But we have a standing commitment to share with readers the details of any legal threat we receive so it would be hypocritical not to share this, the first legal complain we've ever had to send.  The full document, including our contract with Launch Tennessee, is embedded below.

And now, appropriately enough, we're getting back to work, preparing for tomorrow's "Don't Be Awful" event.