You probably wouldn't hear Pepsi overtly tell customers to stop drinking Coca-Cola. They might make veiled attacks on a non-specific "competitor" in an advertisement. But without empirical evidence for why Pepsi is better than Coke, mentioning Coke by name would not only risk drawing undue attention to a product that is already more popular than Pepsi -- it would also come off as a little desperate.

And yet, according to Mashable, that's what Twitter has ostensibly done with a prompt sent to its highest-profile users, suggesting that they stop using Instagram links for photos because they do not appear directly in tweets. Instagram cut off its Twitter Card integration a few months after being acquired by Facebook. 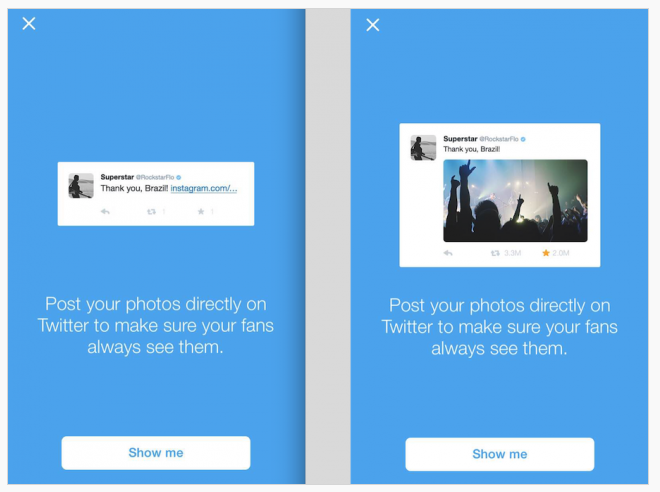 In an article posted shortly after the screenshots were revealed, Techcrunch characterized the move as "pleading" with power users, further writing that it "only shows the severity of that struggle [with Instagram] as consumers hungrily consume more and more multimedia content."

Is Techcrunch right? Would it be like Pepsi pathetically begging people to stop drinking the far more popular Coke?

Not exactly. It's true that Instagram is more popular, recently hitting 300 million monthly uniques and surpassing Twitter's monthly active user count. Even more troublingly, Instagram is picking up users much more quickly than Twitter -- 100 million of those 300 million users came in just the past nine months. Furthermore, Instagram's popularity is amplified by its parent company Facebook, which has over four times as many users as Twitter and of course does allow Instagram photos to appear directly on its website and mobile apps.

But to some -- including, naturally, Twitter cofounder Ev Williams -- the comparison of Twitter to Instagram is more apples-to-oranges than many media organizations would like to think. Or to pull a quote from a less biased source, as Williams does in a post defending this thesis, Slate's Will Oremus writes:

Under Oremus' and Williams' rationale, Twitter and Instagram are very different businesses, which makes comparing the two services by only one metric -- monthly active users -- that much less appropriate. Twitter peddles more in influence and attention than in magnitude. And to extend the soda metaphor, telling users to stop using Instagram is more like Taco Bell saying, "Wash down your Beefy Frito Tragedy Burrito with Pepsi, not Coke, because Coke doesn't sell its products here."

That's not to say the "struggle" Techcrunch identifies isn't real. As a consumer of photos on Twitter, it's a pain to have to click on an Instagram link instead of seeing the photo directly in the tweet -- a bug which, however slightly, makes me less excited to use Twitter. In turn, as a sharer of photos I often pause before snapping a picture, wondering if I should use my phone's camera app and share it to Twitter, or use Instagram to share it with that community. (I could do both, of course, but it involves extra steps).

But the choice I ultimately make has less to do with loyalty to one service over another. It changes depending on the content. A personal photo of me and my friends is more Instagram-appropriate. Capturing something newsworthy or at least relevant to current events is more Twitter-appropriate. And that only further underlines the differences between the services.

Twitter will never be Instagram -- not from a content and community perspective, nor probably in size. And if Twitter's appeal to users is an attempt to directly compete with the photo-sharing giant, then it's going to be sorely disappointed when Instagram continues its fast ascent. But if Twitter is merely gently reminding users that their Instagram links look terrible on Twitter, and that they shouldn't use it if they expect any of their Twitter followers to see their photos, then more power to them.