The antipathy toward streaming music services from many in the artist community is well-known. Their arguments cover everything from low royalty payments to more philosophical concerns -- like that streaming music, which exists entirely in the cloud and not as an MP3 or physical product, has created a more disposable culture around the artform.

But the latest artist attack on the new music economy isn't a Guardian editorial or a speech at a music symposium. It's a whole site that parodies not only tech music platforms but the Silicon Valley startup machine itself. 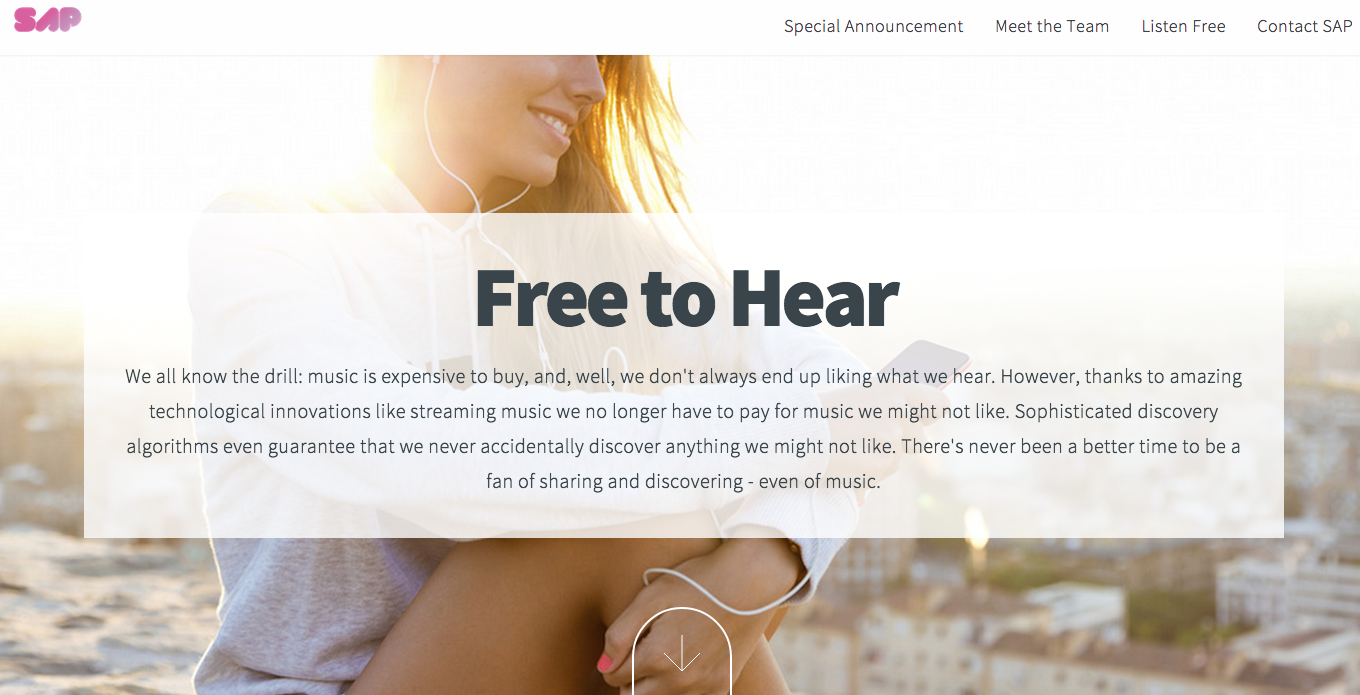 "We all know the drill," the site announces in that wonderfully presumptive tone of startup founders and roadside hustlers, "music is expensive to buy, and, well, we don't always end up liking what we hear. However, thanks to amazing technological innovations like streaming music we no longer have to pay for music we might not like. Sophisticated discovery algorithms even guarantee that we never accidentally discover anything we might not like."

But SAP thinks the process could be even more efficient. Tillman writes:

I am pleased to introduce SAP, a new signal-to-audio process by which popular albums are 'sapped' of their performances, original vocal, atmosphere and other distracting affectations so the consumer can decide quickly and efficiently whether they like a musical composition, based strictly on its formal attributes, enough to spend money on it. SAP files sound incredible when compressed and streamed at low resolutions over any laptop speaker or cell phone. They are cheap to produce and take up even less space than the average MP3. They contain just enough meta-data to be recognized by sophisticated genre aggregation software. Everything you love about discovering and sharing free music, minus the cost to anyone: artist or fan.

As a trial run of the "service," Tillman has posted his full upcoming album "I Love You, Honeybear," which will be released next month, in compressed SAP format that sounds like it was played on a child's keyboard and amplified through a 1980's computer speaker. It's truly awful. I couldn't even make it two minutes.

Not only is the site a trenchant commentary on the financial -- and fidelity -- pressures that tech platforms place on artists, it's also a truly savvy way to drum up attention for Tillman's new album which, presumably, will not sound like complete garbage.