Labels, not Spotify, are screwing over artists and breaking the music industry. Here's how to fix it.

"It's Motown all over again."

In the 1960s, Motown Records had a reputation for depriving artists of well-earned royalties, most egregiously in the case of Barrett Strong whose name was removed as a songwriter of the 1960 hit "Money (That's What I Want)" because of a so-called "clerical error." Chamberlin's point was, despite the groundswell of criticism from artists against Pandora and Spotify, it's labels, not technology platforms, that are most responsible for low royalty checks. The reason artists feel the pain so acutely in today's digital era is that there are more performers than ever before with access to wide distribution platforms like YouTube and far less money to go around: Music industry revenue has been cut in half since 2000.

Referring to the heyday of the overpriced CD in the 90s, Chamberlin said, “I just think when money’s swollen like that there’s this ‘high tide rises all boats’ type of mentality.” But the truth is, labels have always withheld massive shares of royalties, with or without Spotify.

The problem is, these contracts between artists and labels -- and labels and Spotify -- are proprietary and opaque, so it's been difficult to identify precisely how much artists are getting screwed on a macro level, beyond looking at the sad earnings statements musicians occasionally publish on their blogs.

And who do you suppose takes the biggest cut? You guessed it, labels.

According to the report, labels net 45.6 percent of the streaming revenue created by Spotify and Deezer, the two platforms included in the study. The streaming platforms themselves -- most of which have yet to achieve profitability despite fielding frequent attacks for their supposed greed -- take home 20.8 percent. An additional 16.7 percent is paid in taxes before songwriters and performing artists finally see their shares -- which amount to 10 percent and 6.8 percent, respectively. 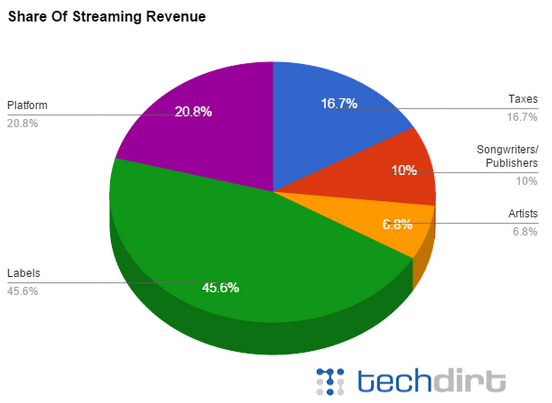 When you disregard taxes and the platforms' share, labels keep a full 73.1 percent of the net revenue streaming services transferr to the music industry.

So how do the labels justify leaving such a slim piece of the pie to artists? "Well," a record executive might argue, as he picks a piece of stale taco meat from his teeth, examines it, and decides to eat it, "Putting out an album is expensive."

That may have been true fifteen years ago. But now that the world is digital, manufacturing costs are fast approaching zero. Recording software has gotten so good and so (comparatively) cheap that a kid with enough talent can make a record that sounds just as good as the new Taylor Swift album from her basement using ProTools, which costs $900 (or nothing, if one is willing to employ the five-finger Pirate Bay discount).

Furthermore, labels no longer need to launch an expensive world tour or bribe radio stations for an artist to receive international exposure. Sure, having a label marketing team behind your work certainly helps, but social media still possesses some vestige of its open, democratic roots -- enough for savvy artists to build a following and attract attention to their work organically without a giant advertising budget.

My favorite example of an artist casting off major label overlords is hip-hop/R&B artist Ryan Leslie. He told me that his first album released on Motown in 2008 sold 180,000 copies. But the royalties Leslie received from those sales did not cover the $100,000 label advance he received to produce and market it. His new self-distributed album, however, has only sold 12,000 copies — less than one-tenth the sales of his Motown debut — and yet Leslie took home around $160,000 in revenue off album sales alone. When merchandise sales and concert tickets are included, Leslie has made over $400,000 since going independent, all of which he got to keep and distribute among his own small, lean team. (Of course it helped that Leslie already had a significant fan-base from his work on Motown).

Labels are withholding royalties as greedily as ever, and yet their value to artists has diminished greatly in the digital age. This demands a dramatic rethinking and restructuring of label-artist arrangements, a process that has barely begun to take shape.

Many artists have already experimented with new models: Macklemore & Ryan Lewis stayed independent as long as possible, utilizing free platforms like YouTube to gain a following. Only after their hit "Thrift Shop" went viral did they approach major labels; and even then, they merely struck a distribution deal with a label to help get their music onto terrestrial radio and into big box stores. This is apples and oranges to the all-encompassing 360 deals that deprive so many musicians of well-earned royalties.

The number of success stories like Macklemore's continue to grow. But are they repeatable? Can a business model be built around these hybrid deals that allow artists to stay independent but take modest label assistance when needed?

Ryan Leslie thinks so. A buddy of Ben Horowitz, he's currently raising money for his company Disruptive Multimedia to build what he calls “the first direct-to-consumer record label.”

Here's how it would work: Artists who sign a contract with his label would receive access to some powerful social promotion and analytics tools (for more on those, read my feature on Leslie) along with a small marketing advance -- enough to make a difference, but not enough to eat a giant hole in the artist's eventual profits. The label then takes 20 percent of the artist's royalties and recoups the marketing advance. So for example, if an artist took a $10,000 marketing advance and made $160,000 in album revenue, like Leslie did, the label would take $42,000 and the artist would keep $118,000. That's just over 26 percent of the earnings -- a fry cry from the 73.1 percent that labels take on average.

Who knows if Leslie's model will work. And even if it does, the allure of a major record label is still astoundingly tempting to many artists – particularly those who have yet to suffer through the indignities of this model. For that reason, labels and their outdated model aren't about to die anytime soon. But luckily, they're far from the only game in town.

In the meantime, artists should save their breath complaining about Spotify and instead try to restructure their label contracts. If that doesn't work, call Ryan Leslie.