The Tor project has launched an internal HR investigation into one of its most senior staffers following claims that she led a smear campaign to undermine Pando's reporting into the organization.

According to Tor executive director Andrew Lewman (above), the investigation was prompted by a remarkable series of Tweets posted by senior Tor developer Andrea Shepard. In the tweets, Shepard accused Pando's Yasha Levine of receiving funding from the CIA for his coverage of Tor; she also accused him of being a "rapist" and a "fascist."

Shepard's tweets went on to allege that Pando had been secretly co-ordinating a four month gender-based online harassment campaign against her, apparently with the backing of the CIA and UK-based intelligence unit, JTRIG.

Other tweets appeared to show that Shepard was using a connection with the Anonymous hacker collective to repeat or amplify her claims about Levine and Pando through their 1.4m follower Twitter account. Finally, she appeared to acknowledge that her Tweets had been an attempt to "troll" Pando. After locking her Twitter account to allow only friends and colleagues to read her comments, she mocked our response to her smears, boasting that she was "in awe of [her] own raw trolling power." 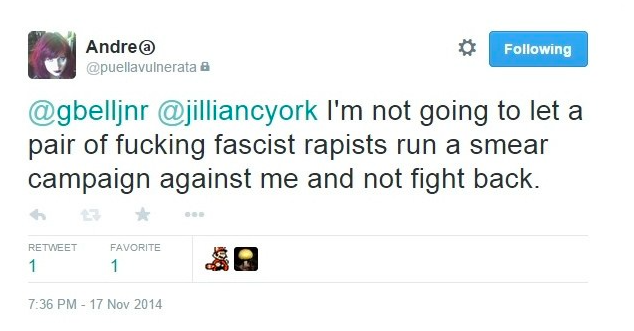 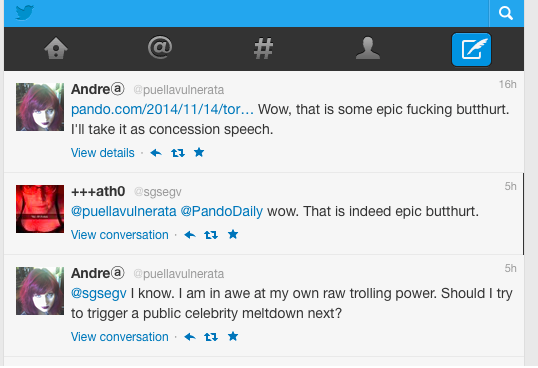 Pando wasn't Shepard's only target: She also launched attacks on journalists Alexa O’Brien and Quinn Norton. At one point Shepard questioned whether Norton had been paid by Pando to ignore the alleged "harassment" campaign against her. 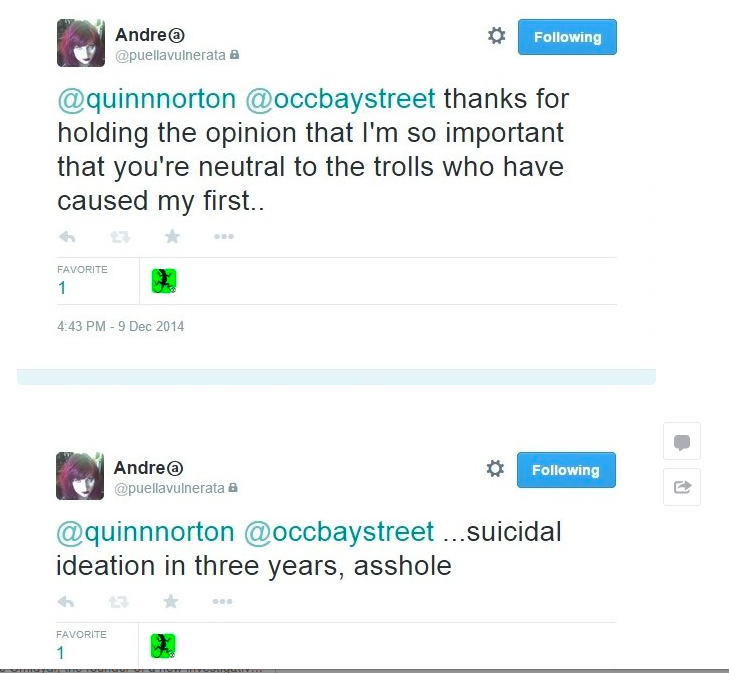 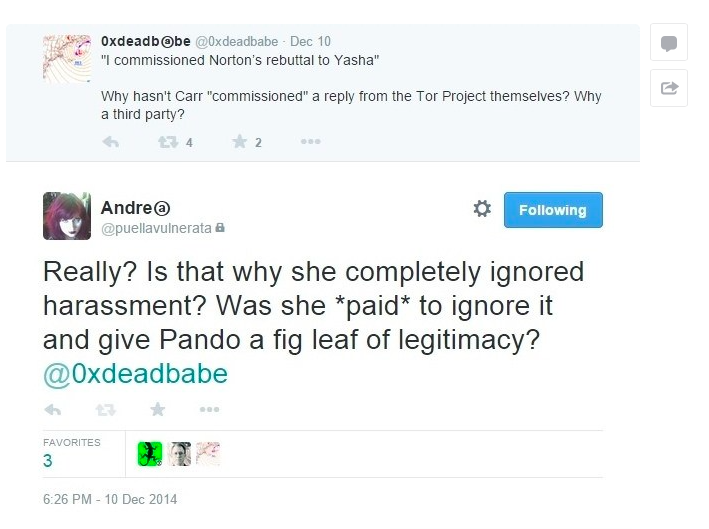 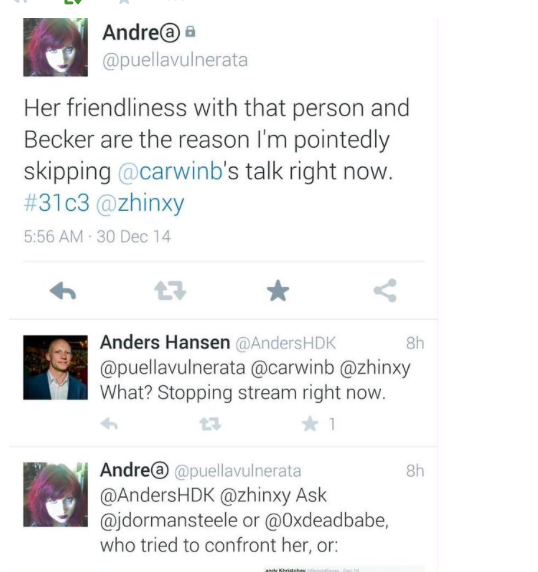 Shepard previously made headlines when she appeared to accuse Amazon of working with the NSA to intercept an IBM keyboard she had ordered.

Lewman revealed the existence of the investigation during a phone conversation with me and Pando editor in chief Sarah Lacy.  We had requested the call after Levine's name had appeared on a darknet "assassination list," in an apparent attempt to crowdfund serious harm against him. Shepard had previously Tweeted that she would welcome Levine's death and suggested various gruesome methods by which that might occur.

The purpose of the call was to seek Lewman's response to Shepard's Tweets and to establish whether her claims had been officially sanctioned by the Tor project. At no point did Lewman ask that the call be off the record.

In 2013, the most recent year for which Tor has made records available, Shepard was paid just under $130,000 for her role as developer. That made her Tor's 5th highest paid employee. According to legal advice sought by Pando, if Shepard were found to be harassing or smearing journalists in the course of her employment, Tor might be putting its government funding in jeopardy, in addition, of course, to putting the organization at risk of a defamation suit.

Tor receives almost all of its funding from the US government or from US government-backed organizations, including the State Department, the Department of Defense and Radio Free Asia, which is funded by the Broadcasting Board of Governors (BBG), previously a branch of the United States Information Agency. Tor is also a registered US government contractor. Until 2012, the State Department and BBG were banned by the United States Information and Educational Exchange Act (1948) from engaging in propaganda on US soil. This included making it illegal for BBG to fund any organization that attempted to undermine the first amendment rights of journalists working inside the US.

In 2012, journalists working for USA Today were reportedly the victims of an attempted smear campaign by a different government contractor after the newspaper reported on that organization’s propaganda activities overseas.  The contractor's alleged attempt to smear US  journalists prompted a criminal investigation by the Pentagon's inspector general:

"In light of the recent admissions by the minority owner of Leonie Industries, the on-going investigation will also address the company's role in the series of web sites used in an effort to discredit two USA TODAY journalists to determine if any company resources or personnel were involved," John Crane, an assistant inspector general, wrote to [Rep. Hank] Johnson [D-GA].

The investigation could result in the company being excluded from federal contracting. In 2013, the Obama administration made the controversial decision to revise the 1948 law to widen the range of propaganda activities permissible on US soil. However, the statute still reads:

No funds authorized to be appropriated to the Department of State or the Broadcasting Board of Governors shall be used to influence public opinion in the United States.

This would appear to outlaw Tor attempting to turn domestic public opinion against a US-based media outlet, in order to protect Tor’s public image.

During our call with Lewman, we asked that he share with us any evidence he might find to support Shepard's claims about Pando's alleged CIA ties or our alleged involvement in a harassment campaign against Tor developers. To date, Lewman has offered no such evidence. Previously Lewman had told Pando that he had not seen any evidence to support Shepard's claims about Pando. He also previously committed that no one at Tor would be involved in any attempt to smear Pando or our reporters.

For the avoidance of doubt: Unlike Tor, Pando has not, ever, received any funding or direction from the US government. Nor have we ever been involved in any campaign of harassment against Andrea Shepard, or any other employee or supporter of Tor.

Our call with Lewman took place on January 7th, and, at that time, he told us his investigation into Shepard had been ongoing for several weeks. That would mean it likely started before Tor founder Roger Dingledine and activist Jacob Applebaum appeared on stage in Berlin's 31C3 conference and pledged their full support, and the full support of the Tor project, to Shepard.

Two weeks ago I asked Lewman for comment on the progress of the investigation. He responded:

Thanks for following up. I've asked our HR team for a status update.

Finally, last week, I contacted him again, explaining that Pando was planning on reporting the existence of the investigation. Specifically I asked him to confirm the following:

The inquiry was instigated by you and has been ongoing for over a month. It started before Dingledine/Applebaum spoke in Berlin. It is being led by your HR dept. Can you tell me who in your HR dept is actually running it? Can you give me any more specifics on the parameters of the inquiry?

Lewman declined to comment, claiming: "We do not believe it's appropriate to discuss internal matters in public."

Last year, asked by the BBC about Tor's relationship with the US government, Lewman said:

Everything we [at Tor] do is transparent and public, including our finances. And this stops - we like to think it stops a lot of possible subterfuge and questionable actions because everyone knows that everything we do is going to be out there in public and open for scrutiny.