As I wrote last year, Gawker tried really, really hard to block lawyers for its former unpaid interns from using social media to spread the word about their upcoming class action suit against the company. Two months later, in what was apparently a precedent-setting decision, the judge overruled Gawker's objections and decided that social media would, actually, be the perfect way to promote a class action that will likely involve hundreds of millennials.

So now comes the fun part: The interns' lawyers have to put together a social media strategy for promoting their lawsuit. And, thanks to newly filed court docs, we can get a sneak peak of what they have planned. The short version: they're going to spam Twitter and Reddit, including forums favored by the anti-Gawker "Gamergate" movement.

Buried deep in a set of court documents outlining some dull delays in the legal discovery process, and helpfully listing the names and email addresses of all of the former Gawker interns (in case you're hiring!), we find a document entitled "Plaintiffs' Proposal Regarding Social Media Notice."

In it, attorneys at Liddle & Robinson outline a plan to set up accounts at Twitter, Reddit, LinkedIn, Facebook and Tumblr and use them to "tweet, send replies and mentions, and private direct messages" to anyone who might qualify for the class action suit.

Sadly, the document doesn't include strategies to reach those same millennials via Snapchat, Tinder or Fetlife. What the document does make clear is just how annoyingly spammy the lawyers are hoping the court will allow them to be:

Plaintiffs propose the use of a Twitter account named "GawkerInterns"(Twitter limits account names to 15 characters in length). Plaintiffs' Twitter account will be used to "follow" known former Gawker interns. The "bio" for GawkerInterns, which Twitter limits to 160 characters in length, will state:" To join the collective action lawsuit brought by former Gawker interns, please visit GawkerInternLawsuit.com for more information."

Plaintiffs propose they be allowed to publish a LinkedIn group entitled"Gawker Intern Lawsuit(www.GawkerInternLawsuit.com)." Plaintiffs' counsel will "invite" former Gawker interns to join the Group. The "Subject" and"Welcome Message" for the"invitations" are preset by LinkedIn.The"Subject" line of the "invitation" will state:" Andrea Paparella [or Robert Adler, or other attorneys from Plaintiffs' counsel's law firm] invites you to join Gawker Intern Lawsuit (www.GawkerInternLawsuit.com) on LinkedIn."

Plaintiffs propose that Plaintiffs' counsel be allowed to use their own Facebook accounts to search Facebook for known interns' names, when such interns' profiles are found, clicking the "Add Friend" button... Plaintiffs also propose that Plaintiffs' counsel be allowed to send messages to interns, whether or not such individuals are "friends." Showing that they really understand the kidz, the lawyers will also use "hashtags" to further push their message. They helpfully include a list:

As if spamming individual former interns isn't annoying enough, the lawyers at Liddle & Robinson hope to bug the rest of us too, courtesy of "the front page of the internet":

Reddit is the self-proclaimed "front page of the Internet..." This litigation has been discussed on Reddit. A search for"Gawker Interns" results in links and comments concerning this litigation (and other legal issues relating to Gawker), making it an ideal platform to direct potential opt-ins to the Court Authorized Notice. Subject to Court approval, Plaintiffs will post a hyperlink to the Court Authorized Notice on Reddit pages, with some or all of the following text (i) "To join the collective action lawsuit brought by former Gawker interns,or for more information, please visit GawkerinternLawsuit.com;" and (ii)"Only [_] days left to join theGawker intern collective action lawsuit."Plaintiffs propose that the Reddit pages where content would be posted include: KotakuInAction, 2 News, Business, OccupyWallStreet, LostGeneration, and Progressive.

It's in the Reddit section that the lawyers show the real holes in their understanding of social media. You might recognize "KotakuInAction," one of the groups the lawyers intend to target to promote their lawsuit, as being the Reddit hub of the Gamergate movement.

Put mildly, that would seem an odd place to try to contact former Gawker employees given the group's stated hatred of all things Gawker. But it certainly seems like a great way for the attorneys at Liddle & Robinson to get themselves trolled by fake plaintiffs.

Here are the relevant pages from the court filing: 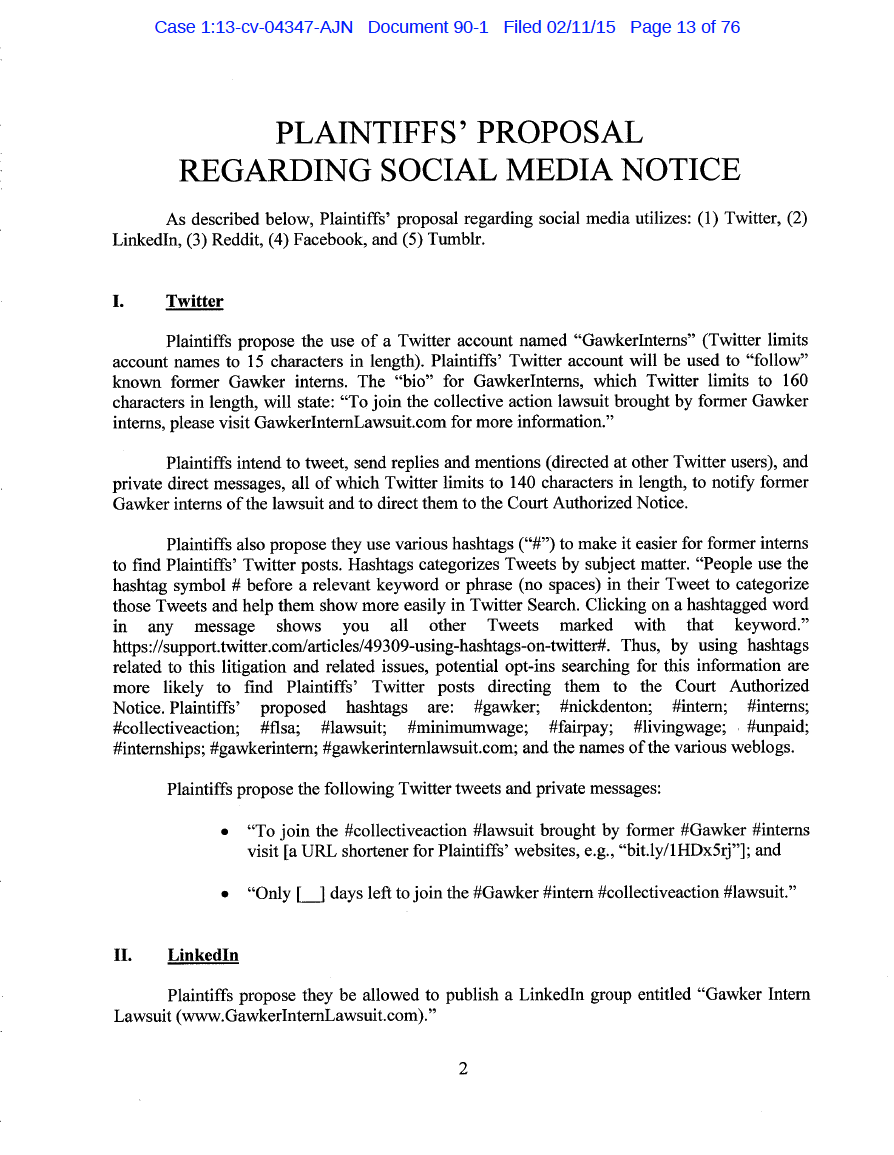 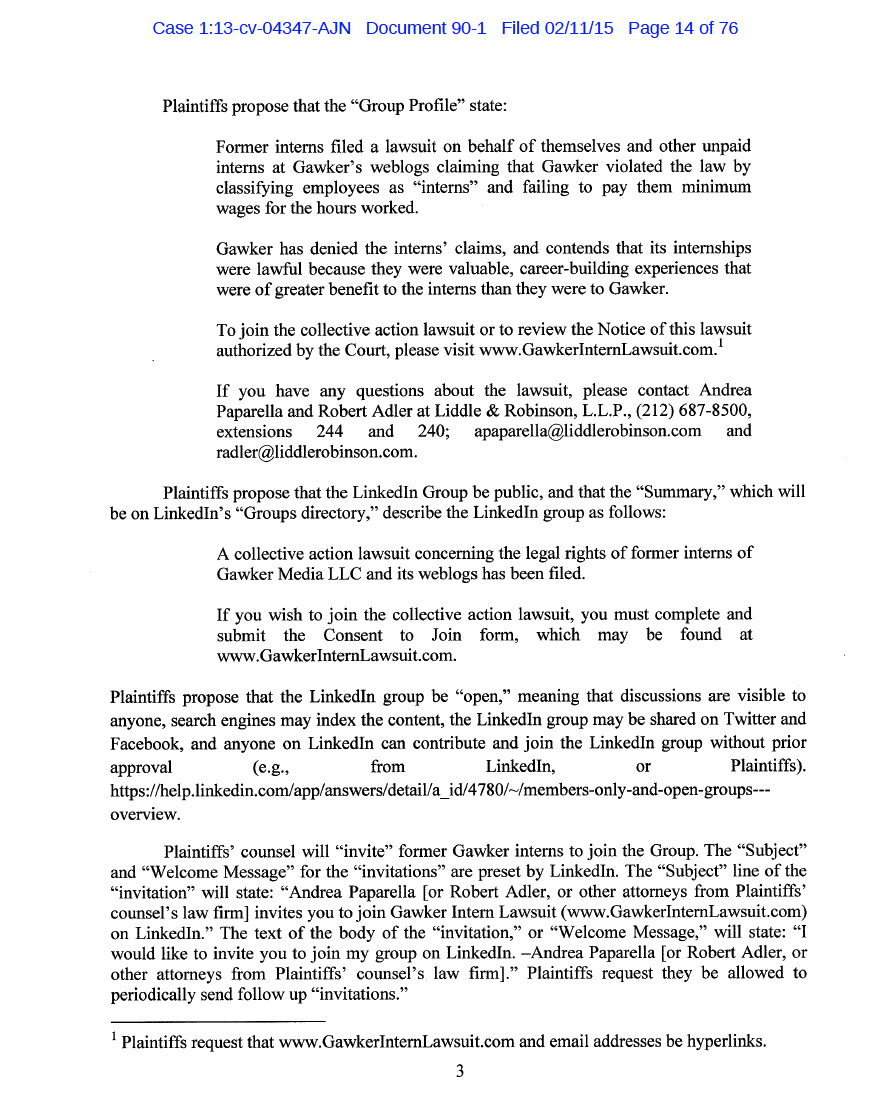 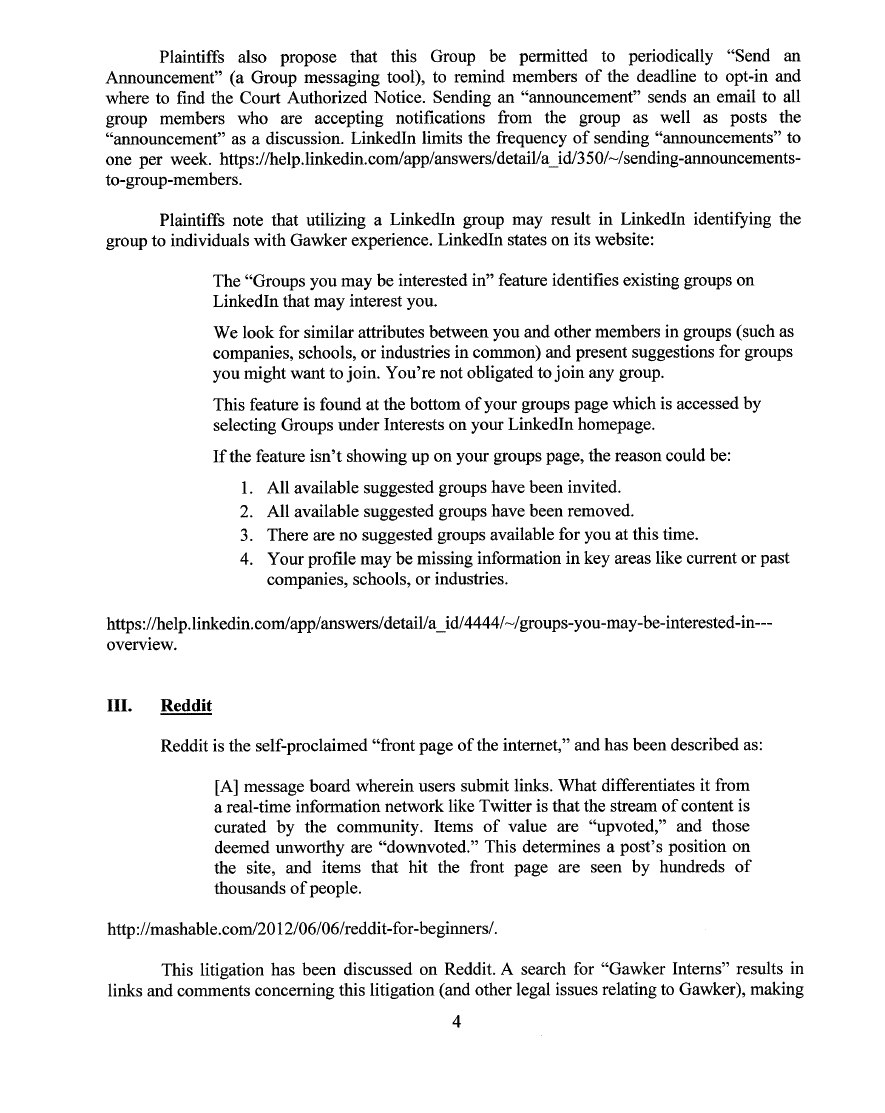 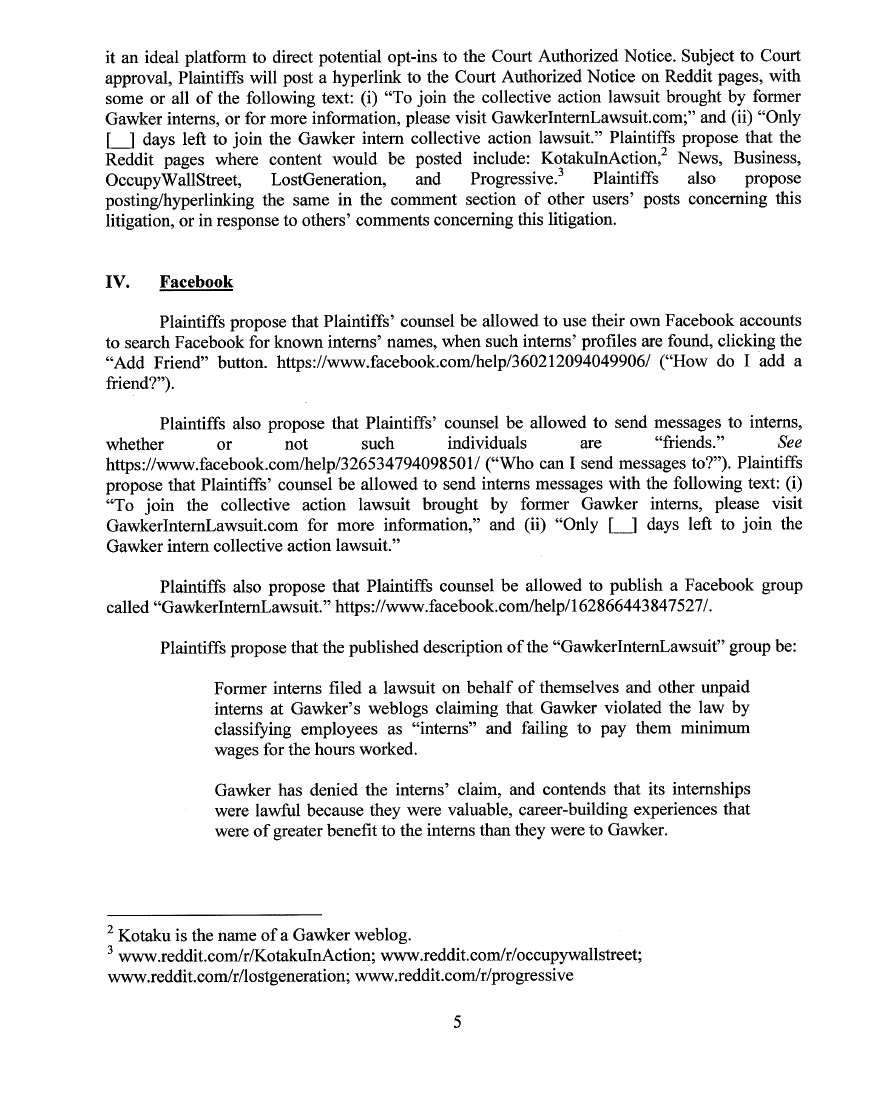 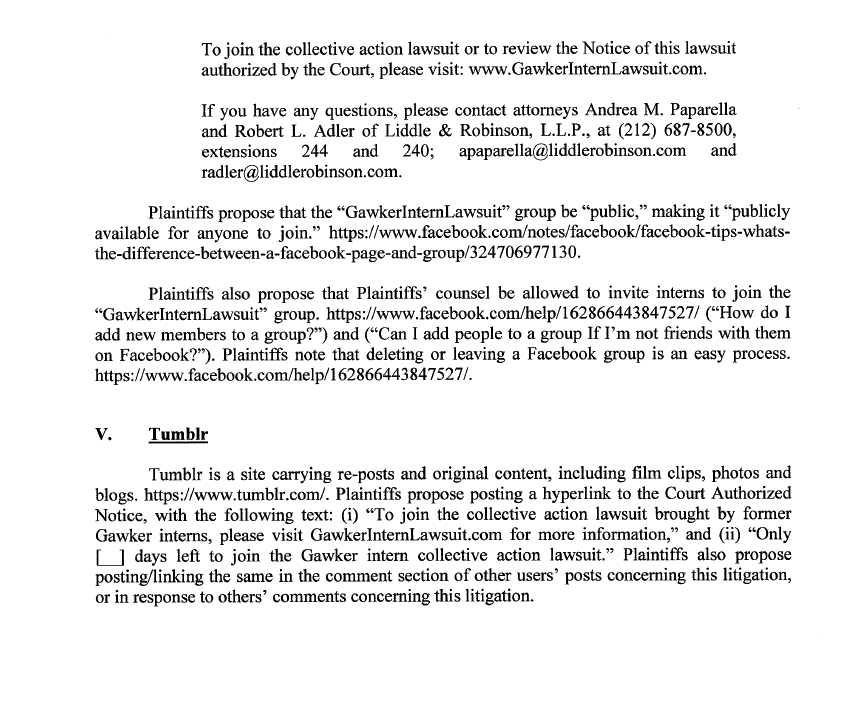