Crowdfunders attempt to bribe Pando into covering their project

Companies don't often resort to outright bribery in their requests for coverage. They offer "exclusive" interviews, pester us with all-caps subject lines, and call our phones even though we never offered up our numbers.

Yet that's exactly what someone currently fundraising on Indiegogo did. Several members of the Pando staff received emails promising to pay us for referrals to the company's fundraising page at a rate of $25 per 100 click-throughs on a unique link. 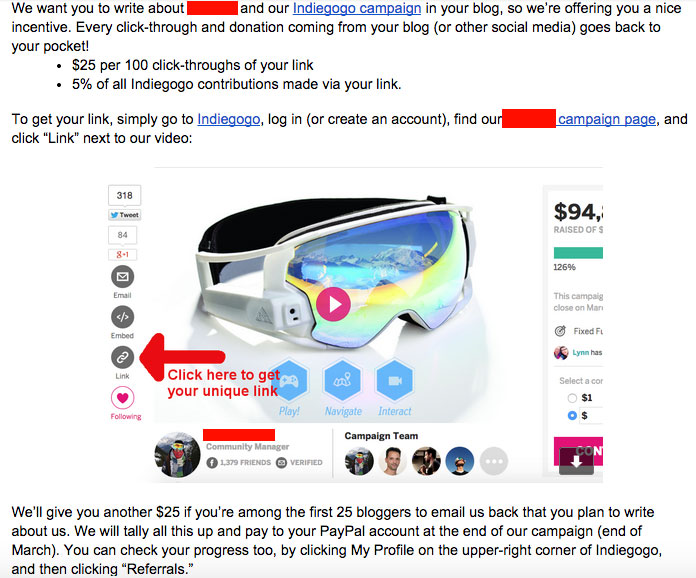 The marketing campaign is made even weirder by the fact that the company behind it has already exceeded its funding goal by more than 20 percent. This isn't a last-ditch effort to meet a deadline -- it's a bald-faced attempt to raise even more money.

It's also strange that the campaign doesn't seem too ridiculous. By that I mean, it's no Christopher Walken Rex, and it doesn't appear to be a "scampaign." The project isn't exactly in my area of expertise, however, so take my opinion with a grain of salt.

Here's a high-level look at the project, as described by a game of buzzword bingo: it's a wearable (one!) product that gamifies (two!) skiing with virtual reality (three!) to create an augmented reality experience (four!). (Thank goodness for the free space.)

Essentially the only thing this campaign doesn't have going for it is press coverage. A quick search in Google News showed just one result (which didn't feature a unique referral link and was published before the bribes started) from earlier this month.

Given that, an effort to convince media companies to cover the product by offering them $25 for just 100 click-throughs might have seemed like a good idea. It wasn't. I suspect this post, which doesn't name or link to the project, is all they're gonna get.