Fair warning: Pandoland is not that kind of conference

Most people take for granted that the 21st century Western world believes women should have a voice. And yet, as America starts to become a place where white, straight men are a minority-- a small but significant group of those men are doing everything they can to smack women back down. You know some of the men I’m talking about: Brogrammers in Silicon Valley, those who send death threats to female games journalists in the name of “ethics”, anyone who would try to shame a college rape victim.

One of the highest profile positive symbols of the new generation of empowered women is Lena Dunham. I am avowedly not a fan of the TV show "Girls," which I thought meant I wasn't a fan of its creator. But my respect for Dunham just keeps growing with every interview with her I've read.

Last month, in the airport on the way to Nashville, I picked up a copy of Elle magazine which had Dunham on the cover. It caught my eye mostly for the cover line quote: "I came into this job being myself. So I'm free." Can you imagine if every professional woman could say that? 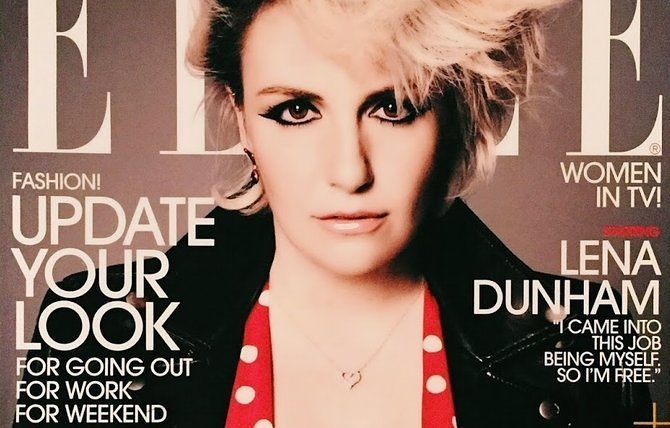 To some, Dunham is a symbol of women in Hollywood. To others, she's the voice of a disaffected generation. To me, she resonates because she's a woman boss in a man's world who refuses to let that world change her and will only lend it her talents on her own terms-- by being her. I once heard someone say that as a woman you are always "too much of something for somebody." That's certainly been the case for me as far back as I can remember. But I've never seen anyone quite own her "too much" as much as Dunham. Hell, she's way too much for me in Girls. But that's precisely where her talent and success lies. Can you imagine her work if she tried not to be quite so much? It'd be nothing.

It's recently occurred to me that the reason the world seems so shocked when it meets an outspoken woman who is also successful is because so much of the world spends so much energy trying to destroy that. I don’t just mean the outright hostiles, and trolls, and Internet commenters. As bad, if not worse, are the supporters who want to “help” women assimilate into a man's world.

I recently had two conversations with very well meaning friends who were at once congratulating me on Pando's fearless voice and at the same time offering me advice to make our brand-- and my own brand-- more palatable to other people who didn't want something quite so fearless and outspoken. The comments weren't outright rude-- certainly not compared to those Twitter trolls. But they were suggesting that it’d be nice if, once in a while, I wasn’t quite so outspoken. If I only picked the fights convenient for them. If I came with an “off” switch. Likewise I'm sure there are people who say to Dunham, "Love your work on Girls, I'm a huge fan. But could you possibly not be quite so naked on the show all the time?" That's not really how having a voice works.

These conversations were weighing heavily on me as I boarded that flight to Nashville in late January, a planning trip for our big, exciting annual event, Pandoland. Last year’s event was a huge success, and Pandoland 2015 is already guaranteed to be even more so. We've sold hundreds of thousands of dollars in sponsorship, have more than thirty committed speakers, and around 100 attendees have already grabbed tickets -- way ahead of last year on every count. I am from Tennessee and love that I have a very real business reason to spend more time there and shine a spotlight on some of the creativity that lives outside the coasts.

And yet, it's been made abundantly clear to me over the last year or so that a small, but influential group of men in the city do not want me or Pando there. One story that makes the point: As last year’s event was drawing to a close, one male attendee, apparently a Nashville local, stopped Pando reporter James Robinson to share his thoughts on the conference. Specifically, he wanted to share his opinion of me, or as he called me “That Pando lady.” “I can’t believe you let her leave the house,” said the man. James was left speechless.

Some were bold enough to tell me to my face that my personality made them uncomfortable:  I was told I "have a mouth on me." I was even warned to "watch myself." And, best of all, I was told that my occasional use of profanity on-stage is unbecoming for a mother (never mind that most everyone on stage at Southland swore except Al Gore and Christy Turlington, and we raised hundreds of dollars for charity through a swear jar.) The male attendees were expected to curse, but when I do it it’s just plain unladylike. Won’t somebody think of my children!

Worse was some of the behavior from our partners in producing Southland, the local government-backed LaunchTN. As readers will know, we had all kinds of trouble with them -- even after breaking off the partnership, we still had to file a lawsuit to finally get them to stick to the separation contract they signed. What I haven't mentioned before is how during those fights, they would ask if they could negotiate with some of the men on my board instead of me. The subtext was clear: Surely a man would be more reasonable. Less hysterical. I seemed to both be too female for them, and yet not ladylike enough -- a puzzling combination.

So when we split with LaunchTN, we had three choices. We could tweak Pandoland 2015 to try to please these good ol' boy critics. Assimilate. In other words, produce a sort of Pandoland-lite. We could give up on my home state and move our big annual event to another city-- one like Chicago or Atlanta where we'd arguably make more money and where we'd have an easier time getting people from the coasts to attend. After all, we're there because we want to be, not because Pando's business or editorial mission depends on it.

Or we could stay in Nashville - a city I and the rest of the Pando team love more with every visit - and own the fact that the very people who are threatened by seeing a loud, occasionally profane woman on stage are precisely the kind of people who probably shouldn't be at an event all about upending the established norms of business in the first place. We could trust there's a bigger audience in Nashville who are even more sick of the good ‘ol boys rules and bullying than we are. People who would much prefer to play host to an event where everyone is equally welcome, regardless of gender, race, connections, beliefs, or any other factor.

This is an important fight beyond this city's own battles, and even beyond the South. Nashville isn't just a booming economy that may be the country’s next $100 billion city and now makes up one third of the GDP of the entire state of Tennessee, it also happens to be an almost perfect microcosm of the rest of the changing United States. One hundred and sixty languages are spoken in Nashville public schools as the city grapples with an immigrant crush. There’s a reason President Obama picked Nashville as the background to his big speech on immigration recently.

Nashville-- like the country at large-- is grappling to understand what a world looks like in which good ol' boys slowly get disenfranchised. And in the near term, it's ugly. But here's the good news: Just look at the demographic shift to know they are ultimately on the losing side.

So we're certainly not quitting Nashville. Instead we’re doubling down on the city. And we're bringing with us one of the most diverse lineups of tech leaders that any tech conference has ever seen. We'll be joined by female entrepreneurs like Birchbox’s Katia Beauchamp, StyleSeat’s Melody McClusky, Tea Collection’s Leigh Rawden, Forerunner Ventures’ Kirsten Green, and SoulCycle’s Elizabeth Cutler and Julie Rice. We'll feature gay entrepreneurs like Bradford Shellhammer and black entrepreneurs like Paul Judge and Ryan Leslie. We’ll have immigrant entrepreneurs like Facebook’s Stan Chudnovsky and even an undocumented immigrant in Pulitzer winner Jose Antonio Vargas. In fact, as an outspoken, gay immigrant, Jose represents an image of Nashville's -- and America's -- future, perhaps more than any other speaker.

When we talk about diversity, we also mean diversity in terms of political beliefs. One of our other speakers is Ken Lerer, a man who co-created the Huffington Post as a platform to help undermine the NRA. And we mean diversity in terms of experience and path to becoming successful. It’s high time the industry stopped fetishizing 22-year old Y-Combinator grads and recognized that entrepreneurs come in all ages, and from all backgrounds, and build all types of companies. Instead, we’ll feature guests who’ve raised plenty of cash and high prices in the Valley but have gotten there a different way. Like Blue Bottle’s James Freeman-- a middle-aged dad who has obsessed about coffee nearly his entire life.

All of these speakers are taking time from their overcrammed schedules building and investing in some of the world's most valuable companies because they believe in this mission as much as we do. Because this message matters.

What makes Pandoland different from any other tech conference held in the US this year? I get that question a lot. The answer is this.

To the good ol' boys in Nashville: If last year's event made you mildly uncomfortable, watching a woman on stage using unladylike language... then this year's event will make you lose your fucking shit. As part of our commitment to reflect the growing diversity of tech entrepreneurship, we're bringing together everything that terrifies you under one roof. And we'll have a three-day intelligent debate about all of it, as we enjoy great the music, food, and whiskey that will flow throughout Pandoland. I totally understand if you'd prefer to skip it.

We're gambling that there are more people in non-coastal America who embrace diversity in tech and entrepreneurship than reject it. A much greater risk would be for us to try to pretend to be something we're not, or to not celebrate why we think entrepreneurship is just so powerful: Because no one gets to tell you that their way is the only way. My guarantee to attendees this year: If you are building something or want to build something, you'll find someone you can relate to on our stage at Pandoland, someone who inspires you.

We've confirmed more than thirty speakers for Pandoland 2015, and we're nowhere near done yet. Tickets are selling fast but you can still get yours if you move fast. I really hope you'll join us in Nashville in June, no matter who you are, where you come from, or where you're heading.