Barring any eleventh-hour surprises, GoDaddy will launch an IPO sometime next week. Ten months after it filed its first prospectus, the domain-registration and web-hosting company hopes to price its shares between $17 and $19 each. The midrange figure of $18 a share would raise $396 million and value the company at $2.7 billion.

Even if GoDaddy isn't expected to be the hottest tech IPO this year, it's still notable because of the high number of red flags that surround its offering – from annual losses to a dying market to a corporate structure that favors old investors over the new. Here are ten red flags we spotted.

Google used to offer GoDaddy's domain-registration service as an option for its Google Apps customers. Last year, Google started handling registrations itself, including the newer dot-word domains, depriving GoDaddy of an important source of businesses not just for new domains but for web hosting as well. Having Google go from partner to competitor is rarely a positive development.

GoDaddy tried and failed to go public in 2006. Other companies in the sector have gone public over the years, and few are faring well. Web.com is down 49 percent over the past year. Wix.com is down 29 percent. One exception seems to be Endurance International, up 32 percent in the past year, although the company has posted net losses for years.

A dying market with low margins.

On the plus side, GoDaddy's revenue has been growing around 23 percent a year. But it's toiling in the kind of high-volume, low-margin business you see when a service becomes a commodity. And besides, how much longer are small businesses going to need Web sites in an era when most are engaging with customers on Facebook, Twitter or other mobile apps?

Last year, GoDaddy had a $62 million operating loss. Add in interest expense from the company's growing debt (see below), and you get a net loss of $143 million. That's on top of an aggregate $479 million in net losses in the previous two years. It may be a while before GoDaddy ever turns a profit.

It's never a good sign when an IPO candidate steers you away from the conventional financial metrics embraced by most accountants. GoDaddy prefers bookings over revenue, even though revenue takes refunds into account. It also prefers adjusted EBITDA, even though operating profit includes amortization expenses, which are high because of the unnecessarily complex corporate structure (see below).

Ghosts of controversies past.

GoDaddy CEO Blake Irving is doing his best to rehabilitate the company's ghastly image established under ex-CEO and elephant slayer Bob Parsons. Those sexist Super Bowl spots were intended to create a memorable brand, and they succeeded all too well: They, along with the SOPA debacle, are what people still think of when they hear GoDaddy. It didn't help that this year's Super Bowl ad, a parody of Budweiser ads that misfired horribly, had to be pulled.

IPO proceeds will go to insiders.

Much of the cash raised by the IPO will go to repay a $300 million loan the company took out from an entity controlled by Parsons, to “fees” paid to existing investors, and to pay IPO expenses. Little of it will finance new growth or to dividends for new shareholders. GoDaddy warns that any future growth or acquisitions may have to be financed by taking on more debt or selling more stock.

GoDaddy's debt increased to $1.5 billion last year from about $1 billion a year earlier, thanks in good part to a loan taken to pay a $350 million dividend to insiders. That's fine for existing investors, but repaying that debt may mean drawing on the company's future cash flows. Moody's rated the debt with a junk-level Ba3, and put a negative outlook on it.

This graphic below from GoDaddy's prospectus says it all. Simply put, GoDaddy is structured as it is to ensure lower tax payments for – that's right – existing investors. It also limits the voting rights of those who buy into the IPO. Are you starting to see a pattern in how older investors are regarding the new ones? 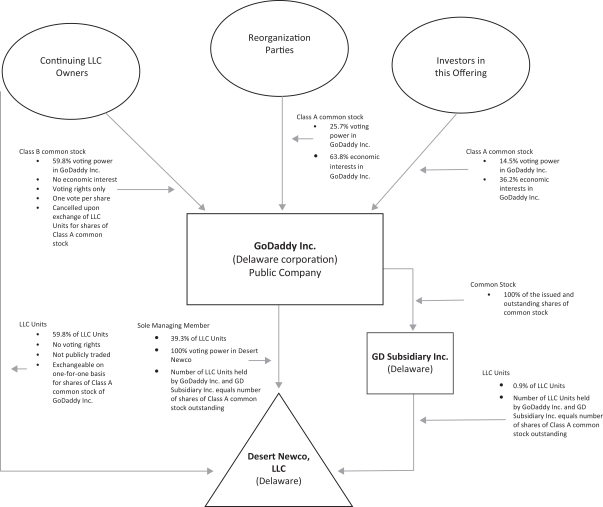 Like Box, GoDaddy filed for its IPO in 2014 then delayed the actual offering even though others were having no trouble going public or raising private megarounds. When it filed last June, analysts expected GoDaddy to raise $750 million or more. Now, the IPO is expected to raise about $396 million, depending on investor interest.

The contrast with Box may be the most telling thing about GoDaddy. Box needed cash to invest in a piece of the burgeoning cloud industry, while GoDaddy just seems antsy to pay out its PE investors before the stock market heads south. The Box IPO may have been rocky, but it was about Box's future. GoDaddy's IPO seems squarely focused on its past.