Happy Tax Day! Here's your annual reminder that rich people and corporations are not overtaxed

If you've ever spent time watching Fox News or reading the Wall Street Journal's editorial page (the father of a ex-girlfriend of mine routinely subjected me to both), you probably think rich people and corporations in America pay tax rates that are extraordinarily, egregiously, obscenely high. And therefore it is unfair -- unpatriotic even! -- for politicians, advocacy groups, and everyday citizens to demand that the individuals and organizations who possess the lion share's of America's wealth should contribute more to the nation's tax bill.

People can have differing opinions over how much of the nation's tax burden should be shouldered by the richest among us. Conservatives have a right to believe that tax rates on the rich are already high enough, and the fact that President Obama -- not to mention the majority of Americans -- believe otherwise is simply a symptom of class warfare sparked by liberals to put more Democrats in office.

In turn, I have a right to call horseshit on that claim and argue that, due to America's $439 billion budget deficit, taxpayers' struggles to make good on Medicare and Social Security payments in the face of a rapidly-aging population, and surging income inequality bolstered by record corporate profits, unprecedentedly high CEO compensation packages, and wages and employer contributions to health care and social security that haven't been this low since 1948, maybe the wealthiest one-percent could pony up just a little bit more cash to make life easier for the rest of America.

First, let's examine the claim that rich individuals pay too much in taxes. Anyone who's ever done their taxes by hand knows that the more income you bring in annually the higher your base federal income tax rate will be. For example, for the 2015 tax year Americans will pay rates anywhere between 10 percent and 39 percent -- this highest tax bracket is reserved for households with an annual taxable income in excess of $413,201.

Yet federal income tax is only one component of an American's overall tax bill. There's also income tax assessed at the city and state levels, along with property tax, excise tax, and estate tax. But the big equalizer that brings the overall tax rate of the rich closer in line with lower and middle-class Americans? Payroll tax.

A report put out by Congress' Joint Committee of Taxation found that in 2014, 65.4 percent of Americans paid more in payroll tax than income tax. In fact, the only tax brackets that saw the majority of filers pay more income tax than payroll tax were those containing people who made $200,000 or more annually.

And yet the political discussion surrounding tax rates is almost always limited to income tax and not payroll tax.

"This leads to a really perverse dynamic," writes Vox's Dylan Matthews, "wherein the taxes the privileged pay are worthy of attention and the ones the poor pay are ignored. It paints a picture where the government is being supported on the backs of the wealthy, and the poor and middle class are free-riding. It leads to plans for various kinds of tax cuts and tax reforms that matter massively for the rich and very little for the poor."

So when all taxes -- including payroll tax -- are taken into account, do the wealthiest Americans pay higher tax rates than the rest of the nation?

Just barely. In a report last week, the advocacy and lobbying group Citizens for Tax Justice (CTJ) found that the richest 1 percent in the US spend 32.6 percent of their total income on taxes, while the average American spends 30.3 percent. In fact, only five percentage points separate the overall tax rates paid by those who make $48,900 a year and those one-percenters who make over $1,735,000 a year. 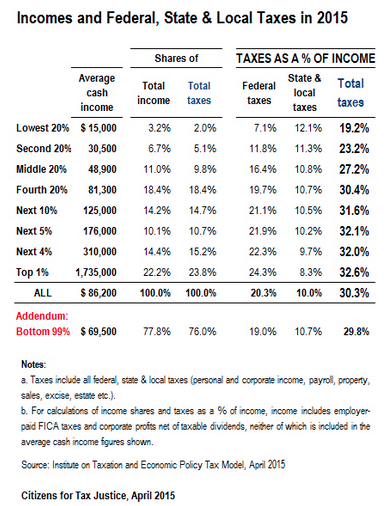 As the data shows, rich individuals do not pay enormously higher tax rates than average Americans. But what about corporations? Don't they pay a higher nominal tax rate in the US than any other developed nation?

They absolutely do. Corporate profits claimed in America are taxed at a rate of 35 percent, which is indeed higher than any other developed nation in the world.

But many, many corporations don't pay anywhere near 35 percent. Loopholes, tax breaks, and offshore shelters where the corporate tax rate is literally zero have created an effective corporate tax rate -- the amount Americans companies actually pay -- of only 12.1 percent. That's lower than virtually any country in Europe and lower than it's been in the US since 1972.

Of course, not every major US corporation is shorting the nation on taxes. But according to another report last week from CTJ, fifteen Fortune 500 companies paid zero in federal income tax in 2014, despite generating a collective $23 billion in profits. These companies are CBS, General Electric, Interpublic Group, JetBlue Airways, Mattel, Owens Corning, PG&E Corp., PEPCO Holdings, Priceline.com, Prudential Financial, Qualcomm, Ryder System, Time Warner, Weyerhaeuser, and Xerox. You would pay more in sales tax on a toy car you bought from Mattel than that company did all year in federal income tax. And 2014 was no anomaly. Over the past five years, these 15 corporations paid a collective effective tax rate of only 1.6 percent. 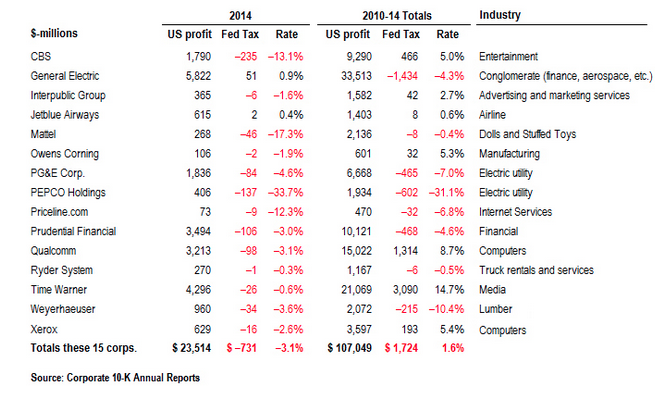 How did these companies pull that off? Among the various ways corporations avoid paying taxes, one of the most popular is to hide profits in offshore tax havens like the Cayman Islands and Bermuda. In some cases, corporations reported profits in these countries amounting to 16 times their GDP -- which as CTJ notes, is "obviously impossible."

As for the corporations engaging in these shenanigans, they include some of the most respected and storied firms in Silicon Valley. Apple topped the list of companies hoarding profits overseas, stockpiling a whopping $157.8 billion. And while some of those profits came from legitimate international sales, CTJ calculated that Apple only paid a 2 percent tax rate on these earnings -- so unless the company sold $160 billion worth of iPhones to Luxembourg, a significant portion of this cash was held in foreign nations to take advantage of low or nonexistent corporate taxes. Other tech giants that keep huge amounts of profits in offshore tax havens include Microsoft, which paid a foreign tax rate of just 3 percent on $92.9 billion held overseas, and Oracle, which paid a 4 percent foreign tax rate on $32.4 billion in profits. For all their ideals, many Silicon Valley firms engage in the same shady capitalist practices as old-school corporate giants.

As the 2016 presidential election heats up, you're likely to hear a lot of talk about corporate taxes and taxes on the rich. But while people are entitled to differing opinions over whether America would benefit from a more progressive tax system, the notion that rich people and rich companies already pay "too much" is more than disingenuous. It's utter deceit.