Is someone at the London Cab Drivers Club a Pando reader?

Just a few weeks weeks after we laid out the many cozy political connections between British Prime Minister David Cameron and new Uber spin chief Rachel Whetstone, this mobile billboard has been spotted driving around London... 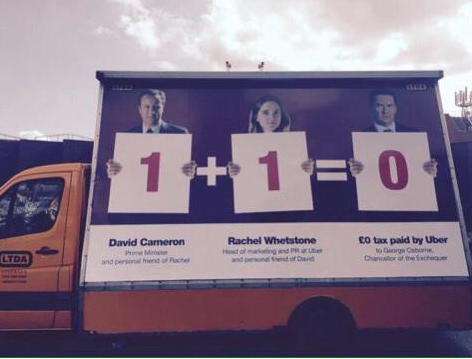 Rachel Whetstone: Head of marketing and PR at Uber and personal friend of David

£0: Tax paid by Uber to Geroge Obsorne, Chancellor of the Exchequer

(For the benefit of non-British readers, the Chancellor of the Exchequer is roughly equivalent to the US Secretary of the Treasury)