Pitchbook recently launched a new "Co-Investor Platform" that can track how various venture capital firms have worked together on past deals. It is quite a good idea. It's also a product that will not only be valuable to tech journalists trying to connect the dots on VC activity, but it could also become an indispensable tool for startups and growth-stage companies trying to figure out which investors might work well together and on which type of deals.

To launch the product, Pitchbook used the relationship between Andreessen Horowitz and Sequoia Capital as an example [Disclosure: Marc Andreessen is a personal investor in Pando]. It's a great co-investor partnership to use to highlight how the platform can be used and just how informative it can be. Sequoia and a16z have had an impressive track record together, including co-investments in Reddit, Airbnb, Okta, and Instacart.

However, instead of just saying, "Look at how cool our new product is, you can see how well Andreessen Horowitz and Sequoia work together," Adley Bowden, Pitchbook's senior director of market development and analysis, went the corporate fiction route, penning a tome called, "Dear a16z..." to announce the new tool.

In the blog post, we are treated to a fictional, syrupy love letter between the two venture firms with Pitchbook's new co-investor platform serving as an absurdist VC Tinder of sorts. Here is the fake note:

We just wanted to write you a note saying we really should invest in something together this year.

In looking at the new Co-Investors data and tool in PitchBook, we realized that we do pretty well when we pair up and invest alongside each other—especially over these last five years. Here is a look at what we have done together since January 2010:

Here are the three companies that you’ve backed in a round after us:

And here are the eight companies that we have invested in together:

Like we always say after sitting next to each other at those board meetings: “We really should spend some more time together.”

So what better way than investing together? Clearly, with our two powers combined (network, expertise, etc.), we can help companies do some impressive things. We have a number of promising early stage companies that will likely be fundraising soon (Kahuna, Shopular, Relcy).

What do you say?

Your friends, s12l It's really cute. Right down to the "s12l" signature. You know, like an affectionate reference to how Sequoia and Andreessen are the same.

It's like the nerdy VC version of the whole Ryan Gosling "Hey Girl" meme. So, I scoured the Web (or, I just went to Memegenerator.net) and found some possible responses to the fake Sequoia/a16z letter in the same vein as the Pitchbook blog. 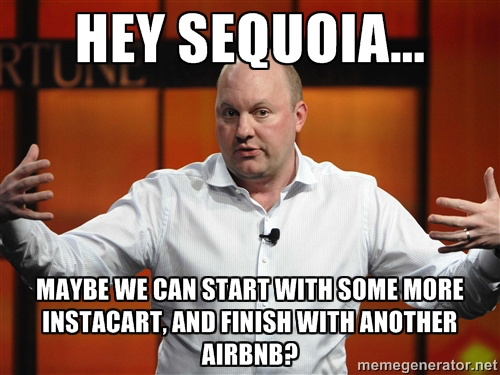 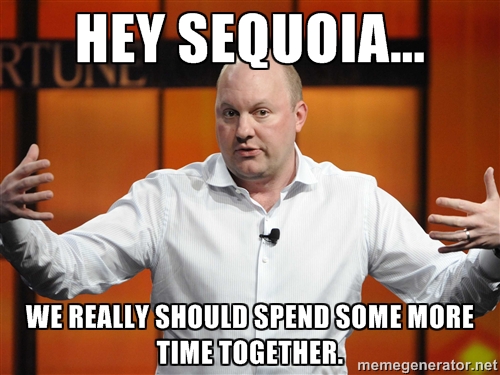 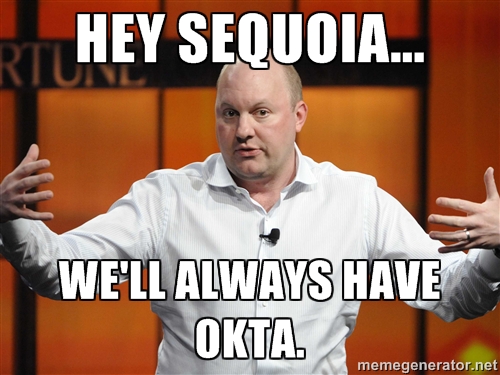