Mattermark CEO reveals the data behind the "Private IPO" movement

To kickoff this year's Pandoland 2015 conference in Nashville, Mattermark co-founder and chief operating officer Andy Sparks gave a presentation that can best be described as the VC and startup version of Mary Meeker's Internet Trends report.
By Dennis Keohane
Jun 16, 2015 · 2 minutes

To kickoff this year's Pandoland 2015 conference in Nashville, Mattermark co-founder and chief operating officer Andy Sparks gave a presentation that can best be described as the VC and startup version of Mary Meeker's Internet Trends report.

For Mattermark's "Q1 & Q2 State of Startups" report — which was just published on Mattermark's blog page — the company tracked more than 500 acquisitions and more than 160 IPOs from the first quarter in 2014 up to the end of Q2 this year. The companies that make up that number are those that received venture or private equity funding prior to a liquidity event, and that show what Sparks called  positive growth and an increase in employees, investment backing, etc.

"IPOs have gone off a cliff this year," said Sparks.

IPO activity contrasts starkly to what is happening with late stage investments, which is often characterized as "the private IPO phenomenon." According to Sparks' report, there has been $27.6 billion invested in startups so far this year. One slide, which Sparks called his favorite in the whole presentation, showed that through Q1 and Q2 this year, there has been more than $9 billion in late stage (post-Series D) investments. Over the same period in 2014, there was a little more than $3 billion, almost a $6 billion swing year to year. 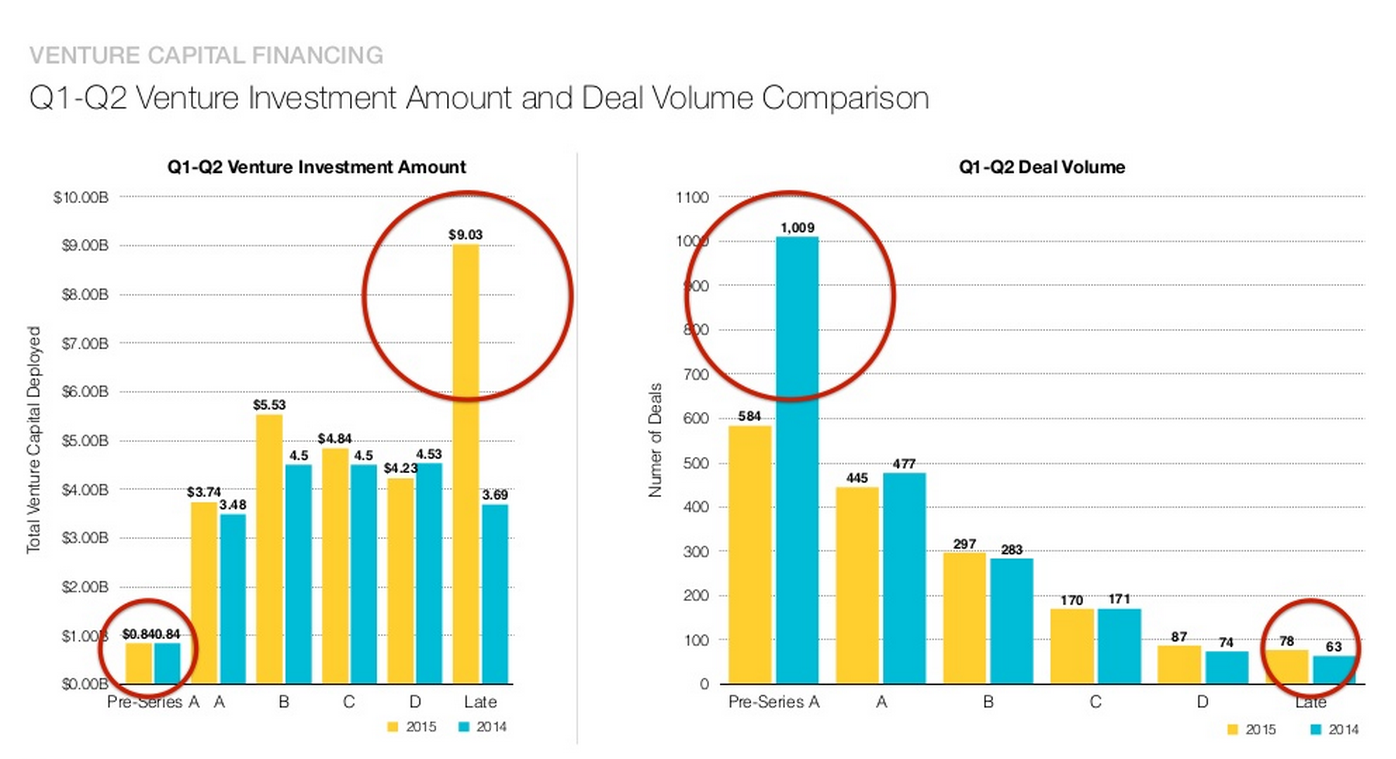 That shift occurred in only 15 more late stage deals than in Q1 and Q2 last year.

Overall, seeing the data to back up the whole private IPO trend is amazing.

The other mind-blowing piece of data that Sparks revealed relates to where startups are popping up. Although New York companies don't have as much funding  as those in Silicon Valley, Mattermark's data found that there are more high growth startups in Manhattan (576) than in San Francisco proper (502).

While that is huge news for the New York City startup scene, and one that they will probably hold up like a banner of pride, the overall area, when compared to the rest of the San Francisco-Silicon Valley region is far smaller. Outside of Manhattan, Brooklyn for instance had just 45 high growth startups, 11 of those which were venture backed,  according to Mattermark's data.

When I asked Sparks, who said he'd never done a keynote before, how he defined startups, he said that they are those that are private, and that Mattermark can see and track an employee count for.

The State of the Startup Union Sparks presented was a great data breakdown of so many things that are happening in the venture capital and tech startup world, and I'm sure some of the numbers Sparks dug into will be topics for discussion over the next 48 hours of Pandoland.