A Union of Disruptors? Meet the Uber driver trying to hack organized labor

Arize Nwosu is helping drivers organize against their bosses. Is this the future of unions?
By Dan Raile
Jun 30, 2015 · 8 minutes

It was on a sunny afternoon in March on the back patio of San Francisco’s best bar when I first encountered the difficulties of virtual labor organization in meatspace.

With a beer in my belly and another in hand, I was chatting with a pair of entrepreneurs who said they’d recently sold their company and were brainstorming startup ideas. They asked if I had any suggestions.

I gave them an impromptu pitch for the "Uber of collective bargaining," sketching out the existence of pain points in the labor market and some brief ideas for eating them with software. For a moment they seemed on board.

“But wait, how is that even a company?” asked one.

“I don’t think anybody is going to fund that,” said the other. They then moved on to develop an idea for a photo sharing and editing app.

This timorous twosome confirmed my suspicion that such an app is antithetical to the Silicon Valley brand of progress. Union membership continues to decline, as the cadres of atomized 1099 ‘entrepreneurs’ expand. And that’s probably no accident, and not a concern that resonates too loudly on Sand Hill Road. The general idea seems to be to ride out any HR troubles until the robots are ready to usurp the workstations.

And then, early this month, I received a pitch from Arize Nwosu, 33, an Uber driver in LA who’s launched an app to connect his co-contractors. It might be the closest thing I’ve seen to an app designed to help labor to organize in the sharing economy.

“Uber purposely designed its system to keep drivers isolated from each other, but I wanna change that,” Nwosu explained in an email.

His app, Blinkr, is in a very early stage. The company is wholly bootstrapped -- with money earned driving for Uber -- and consists of Nwosu and a backend developer, but it already boasts “thousands” of drivers as users. The business model is a work in progress, and has pivoted several times as befits the modern app, but Nwosu said he is considering an enterprise product for operators of vehicle fleets to get “360 degree contextual information” about their drivers, and/or to sell such information about drivers to insurance companies.

At its core, Blinkr is a chat app for drivers, primarily aimed at and recruited from Uber’s pool of contractors in LA, but also including Lyft and Sidecar drivers along with everyday motorists. Originally, Nwosu said, he’d built the app “after driving on Uber for a little bit. You drive and see other drivers passing by, but it’s like two ships passing in the night. You’re so isolated, always driving but can’t communicate.”

He started flagging down other drivers to invite them to the app, and posted an ad on the popular www.uberpeople.net forum.

Since Blinkr launched in May, Nwosu has developed a driver-rating feature which has seen use-cases that span flirting to driver-shaming. He said that he also envisions the app working to provide safety updates to drivers in real-time -- something he says Uber has neglected at its drivers’ peril.

But one day, while driving for Uber, Nwosu realized Blinkr could be something more.

“Another driver pulled up and said ‘turn your app off [and] it’s going to start surging.’ Lo and behold, I did and the app started surging. We made some good money that day,” he said with a laugh. “I realized the power of drivers working together ... our power can be realized if we can all communicate in real time. We would completely change the dynamic between Uber and the drivers.”

Nwosu said there seems to be a receptive audience for such use cases among Uber drivers.

“You’d be hard-pressed to find Uber drivers with warm fuzzy feelings about the company,” he said. “We are providing the services, but we are the worst paid and least respected. Travis [Kalanick] is the hero and the drivers are just peons.”

Could Nwosu be building a wedge to organize Uber’s contractor pool? Not exactly, in any traditional sense. He said he hoped to “realize the power of collective action” but “unionize without unionizing.”

“I don’t believe in drivers joining a union. I think a union is very last decade.”

“But," he added, "if you wanted to make Blinkr into a driver-owned Uber, that is something I’m in for. Not a corporate structure where one company controls all the money, not one company saying how the sharing should happen. But based on what the community thinks is best for itself. If the drivers came together to create their own Uber, that is something I’d like to use.”

For a more historically informed perspective, I turned to Moshe Marvit of the Century Foundation, a fund which has, like the labor movement writ large, been pushed to tweak itself to adapt to the new millennium, first by changing its name in 1999 from ‘the Twentieth Century Foundation.”

Marvit is one of the authors of a recent Century white paper titled, “Virtual Labor Organizing: Could Technology Reduce Income Inequality?”

Given the success of many commercial and consumer based online tools, why shouldn’t there be a new, highly sophisticated online tool that leverages state-of-the-art technology to help promote one of America’s bedrock values: getting a fair shake at work?

Marvit said that the idea behind the paper was to ask, "why doesn’t this exist?" and lay out some ideas for what virtual labor organizing could look like. A "killer app" has yet to emerge in the "labor organizing space." Though nearly all unions and labor organizations today have websites and maintain some social media presence, Marvit finds them generally lacking in functionality.

“For example, the National Labor Relations Board developed an app last year," Marvit said. "With all due respect, it is a terrible app. They basically just took the National Labor Relations Act and their website and put it on an app with a bunch of screens. Our idea was that this wouldn’t be a government-created thing. As long as certain functionality meets the Board’s requirements, that is about as much government involvement as needed."

He sees promise in the approach of user-generated petition platforms like Change.org and Coworker.org, combined with something like the matching operations of LegalZoom.

The app or apps envisioned by Marvit and co-authors Mark Zuckerman and Richard Kahlenberg would provide tools for workers to “communicate, share information, and overcome employer resistance and intimidation.”

“We believe a new online tool designed to take employees through a step-by-step labor organizing process could be effective in increasing unionization,” the report states.

The idea is not new. In an article from the June 24, 2002 issue of The Nation, Richard Freeman and Joel Rogers made a similar appeal, from the dim mists of the medieval post-dotcom years before the Web 2.0 rennaissance.

At essentially zero marginal cost, unions can communicate with an ever-expanding number of new members, and they can deliver all manner of services to them through the Internet...

A labor movement that embraced this vision –taking its own historical lessons with diversified membership seriously and relying more heavily on the Internet in membership communication and servicing–would be practicing what we call “open-source unionism.” 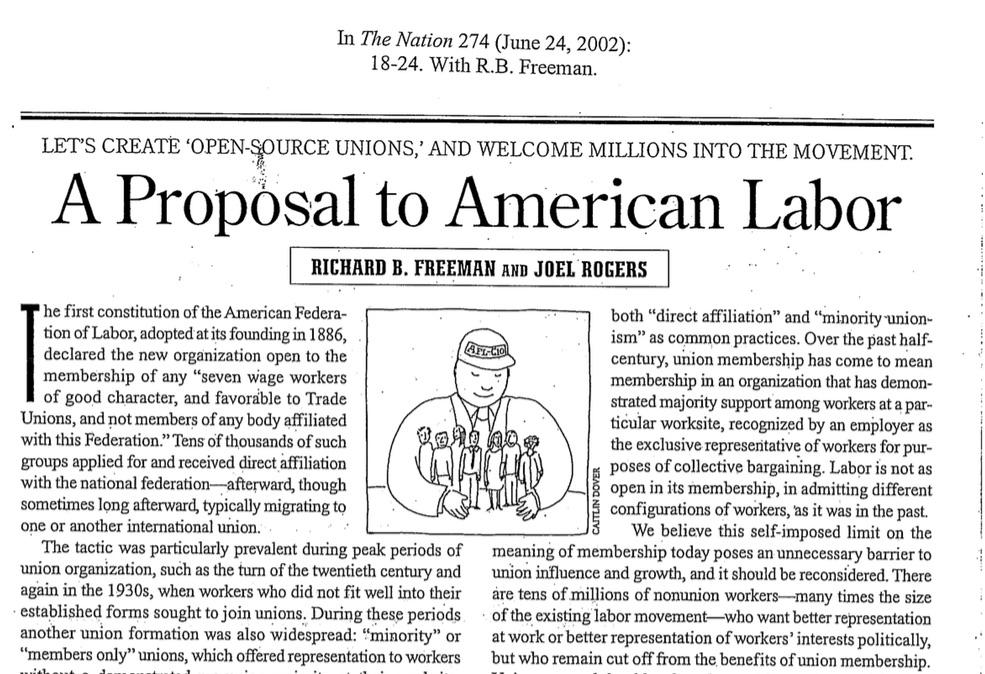 Of course, in the years since that piece was published, technologies have proliferated that could simplify such efforts. And the NLRB has been catching up as well.

“The Board has opened the door to [virtual labor organizing],” Marvit said. He cited a recent NLRB rules change that provides organizers 30 days, rather than the previous seven, to organize workers ahead of union elections, providing extra time for an app to “absorb” the data in an Excelsior List -- a full register of employees and their information provided to a union by an employer -- and apply it toward get-out-the-vote activities. Marvit also mentioned recent NLRB decisions to recognize social media and employers’ company email as protected forms of organizing communication, and a Pew Survey from April which found that 55 percent of Millenials have favorable views of labor unions.

Not everyone in labor land seems convinced about the scope of virtual organizing potential.

“Any union today has multiple websites and any worker using just Google to find their topic of concern is likely to get more than enough information very quickly. But the principle barriers to workers organizing is not a lack of quick and easy information, it is the relentless and vicious opposition of employers in cahoots with politicians,” Craig Merrilees, communications director for the International Longshore and Warehouse Union, told me by phone.

(If, like the average American, you need to brush up on your labor history, consider heading down to the local ILWU hall in North Beach this Sunday at 10am. The union will be honoring the anniversary of Bloody Thursday -- a cataclysm during then-brand-new ILWU’s dock strike in 1934, in which two strikers were shot at the corner of Mission and Steuart streets by the SFPD, and another 85 hospitalized. The clashes precipitated a general strike, during which machine guns and barbed wire fencing were installed along the Embarcadero by the National Guard.)

Merrilees cited a number of organizing campaigns that had seen digital solutions come up short in the face of employer hostility, including the 2013 push by Waste Management recycling workers in Oakland, wherein the organizers found digital activities couldn’t match the efficacy of traditional face-to-face organizing.

Interestingly, it seems that digital labor organizing may be as anathema to the unions as it is to tech, but for different reasons.

“This stuff has real, certain limits. There have been examples of people being deluded in substituting technology for humans in the organizing process,” Merrilees said.