Feeding the crocodile: After years of appeasement, the media is suddenly outraged by Gawker

Nick Denton apparently thinks of himself as one of “Thatcher’s Children.” If that’s true then the milk-snatching old witch must be looking down on her son today with pride, and maybe a touch of envy.

When Margaret Thatcher decided, in the mid-1980s, to crush Britain’s powerful trade unions, she had to pass laws restricting closed shops, banning sympathy strikes and making it possible to fire picketing workers.  Then, during the miners strike and Rupert Murdock’s union-crushing Wapping dispute, when those laws proved insufficiently cruel, the Prime Minister sent in riot police to beat union protestors with wooden truncheons.

All Nick Denton had to do to crush Gawker’s fledgling union was wait.

According to Wired, when told that his staff were hoping to unionize, the Gakwer founder “gazed off into the distance, gave [a] half smile, and shrugged.” What seemed then to be quiet resignation, now looks a lot more like cockiness. Denton knew it wouldn’t be long before his hand-picked staff of nasty, hypocritical, entitled brats would turn on one other.

Still, its impressive to watch how deftly Denton has seized on his newsroom’s current crisis to  de-organize Gawker’s union before it even began. The company’s two highest ranking union supporters -- Tommy Craggs and Max Read (could Dickens have come up with two more evocative names?) -- have resigned, and Denton has promised to pay full severance to any other principled soul who follows them out of the door. In a few weeks the only staff remaining will be those who support Denton's management, those prepared to play along because they have nowhere else to go and, of course, those who hope to use the turmoil to clamber a little higher up the greasy pole.

"You don’t know how long I’ll want to run this show," he said toward the end of the all-hands meeting. "If you were wise, you’d ensure that the editorial policy or stand or ethos that you have among yourself is, at minimum, codified or maybe even included in the union contract."

You might think that someone -- anyone -- at Gawker would be smart enough to see what Denton is up to. Just two weeks ago, every underpaid, overworked blogger in America was cheering Gawker’s union drive, and today those exact same new media wage-slaves are praising Denton for reasserting his authority over the newsroom. What should have been a chance for a freshly-organized editorial staff to demonstrate that they could make grown up decisions all on their own has instead become a study in the value of strong management.

But to appreciate that requires self-awareness -- yet another undesirable trait that Denton has bred out of his workers. Back at the meeting, as reported by Capital New York, the rats had started gnawing on their departing colleagues before they’d even left the building...

The more immediate question is just how the site will continue to function this week. At Craggs and Read’s farewell meeting, staffers expressed anger that they were leaving them behind. At one point, writer Bill Arkin wanted to know what would happen to the rest of them. Craggs and Read didn’t have answers. “This is not helpful!” Arkin yelled, according to a source.

"Not helpful" is right. Precisely nothing that the combined Gawker editorial staff has said or done since last Thursday has been helpful, assuming the goal is to win back reader support after publishing a grotesque story in which an accountant was accused by an anonymous, and possibly mentally ill, male prostitute of trying to pay for sex.

Instead of apologizing for the story, or even acknowledging that it shouldn’t have been published, one senior editor bleated to the New York Times that it was Gawker staff, not the subject of their story, or even their readers, who were owed an apology:

“Nick has a long road ahead of him in terms of gaining back the trust of editorial employees,” said Lacey Donohue, the executive managing editor of Gawker Media, “if he ever does.”

This, after all, isn’t about ruining a man’s life, it’s about independence in journalism. Gawker and Gamergate looked from pig to man, and from man to pig.

And just when you thought the Gawker newsroom’s undergraduate self-regard had reached its apex, here's New York Magazine….

“This is Nick’s Reichstag fire,” Craggs, Gawker Media's executive editor, told staffers. What he meant, a source told me, is that “this was the pretext by which [Denton] can Vox-ify Gawker.”

Woo-ee. As any history student will tell you, after torching the Reichstag, Van De Lubbe -- played here by Tommy Craggs -- stood around for three days watching the blaze until Adolf Hitler -- a young Nick Denton -- finally showed up to extinguish the flames, take full responsibility for supplying the fuel, and pay the remorseless arsonist several months’ salary to toddle off into the sunset.

Still, if you’re going to cast someone as Hitler, there are perhaps better choices than Nick Denton: a gay, Jewish media owner whose mother arrived in London from Hungary after fleeing the Nazis.

It’s little wonder that the entire American media establishment is lining up to take a swing at Craggs, Read and the whole ragtag Gawker band. Along with thousands of journo-tweets denouncing the site’s most recent ethical attrocity, several publications have taken the opportunity to examine Gawker’s long history of publishing indefensible garbage:

In "How the Internet Outgrew Gawker," The New Republic remembered the time Gawker dug into the sex life of a young female politician, and the joy it has always taken in punching down.

In "Gawker’s Homophobic, Years-Long Crusade to Out James Franco," the Daily Beast blasted the site for accusing a man of rape based on nothing but heresay and for its habit of outing closeted gay men.

“Was the Deleted Gawker Post Any Worse Than Its Old Stuff?” wondered Slate before concluding that, no, of course it wasn’t.

What no one seemed willing to ask, however, is why, if everyone knew that Gawker was so toxic -- if Slate and the Daily Beast and the New Republic were so readily able to identify examples of Gawker’s vileness stretching back to its inception -- it took until now for the vast majority of them to speak up? Why, a cynic might wonder, did it take the outing of a senior executive at a Manhattan media company for New York journalists to suddenly declare enough is enough?

There could be any number of explanations for the suddenness of the outcry, but there’s only one for the years of prior silence: Cowardice.

In American media circles, to criticise Gawker -- or even to fail to be sufficiently deferential -- was to paint a giant target on one’s head. Life’s too short, egos too fragile, and jobs in journalism too thin on the ground to risk that kind of drama. Much better to laugh along, retweet a few of Gawker’s fun posts and pretend not to have noticed the ones in which lives were ruined, careers destroyed and corpses presented as entertainment.

When Gawker published its male escort story and it became apparent that some line had finally been crossed, you could almost hear the murmuring in newsrooms across the country: So we’re all agreed?  We’re going to… gulp... criticise Gawker? For real this time? Ok… if we all do it together, they can’t hurt us. Ready… one… two… 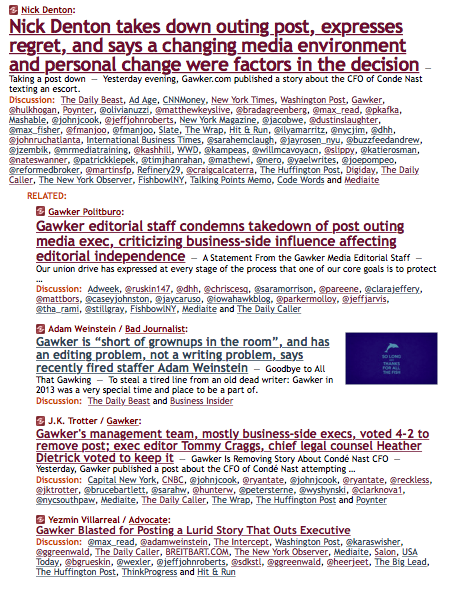 Note too how some of  journalism’s most “fearless” practitioners still felt the need to couch their criticism of the Gawker story with praise for the wider organization. Let’s not be too brave...

The truth is, we can blame Jordan Sargent, for writing his shitty story, or Tommy Craggs for publishing it, or Max Read for proudly Tweeting that “given the chance gawker will always report on married c-suite executives of major media companies fucking around on their wives.” We can certainly blame Nick Denton for arranging the punchbowl, and pre-populating it with turds.

But read Denton’s memo to his editorial staff and another culprit emerges:

This... story was legal, but it could not be justified to colleagues, family members and people we respect. Nor was there any way to explain it to journalists and opinion-makers who decide whether we deserve the great privilege of the profession, the First Amendment that protects our most controversial work. The episode had the potential to do lasting damage to our reputation as a company, and each of our own personal reputations.

Like so many bullies, the only opinion Denton values is that of his friends and fellow journalists, and the only damage he fears is to his “personal reputation.”

The Hulk Hogan sex tape trial might cost the company $100m, but that’s the price you pay for journalism. This recent scandal threatened to cost Denton much more: his social standing amongst the media elites that he’s been courting since he quit the Financial Times and started the First Tuesday networking club in London.

Just as Nick Denton can’t shirk his responsibility for creating Gawker's toxic environment, nor can the journalists who stood silently by, hoping to avoid becoming the site's next take-down target.

To quote another union-busting British Prime Minister “An appeaser is one who feeds a crocodile, hoping it will eat him last.”