Back in February, here on Pando, Mark Ames listed just a few of the controversies in which the organization has found itself embroiled...

Between 2011-2013, Omidyar Network co-funded with USAID regime-change groups in Ukraine that organized the 2014 Maidan revolution.

In India, the head of Omidyar Network’s operation, Jayant Sinha, concurrently worked for the far-right BJP Party leader Narendra Modi helping him take power in 2014, after which Modi appointed the Omidyar Network partner as his junior finance minister.

Pierre Omidyar is a free-market libertarian who told Nobel Prize winner Mohammed Younus he refused to donate to the poor unless he could personally profit off of it. A few years later, hundreds of poor rural Indians committed suicide to avoid debt collectors working for one of Omidyar's for-profit microfinance lenders.

And all of that was before Omidyar Networks became tied up with First Look Media, publisher of The Intercept, the national security blog which started out as a home for Snowden’s secrets but which quickly devolved into a total clusterfuck. (Just yesterday Omidyar’s former business partner, John Temple, became the latest senior staffer to quit the company.)

But now Omidyar has decided that enough is enough. He is going to change the way he does business!

Rather, the hapless billionaire has recruited an expensive PR consultancy to repair the damaged reputation of Omidyar Network. Its first step: To figure out why journalists keep writing mean stories about the organization.

Earlier this week, a group of hand-picked “key stakeholders” including at least one reporter at a major business publication received an email from Interbrand -- a “ leading global brand consultancy” used by clients including McDonalds and Microsoft -- inviting them to participate in a fifteen minute survey.

The survey, which one amused recipient leaked to Pando, included some telling questions, including one in which respondents were asked whether they considered Omidyar Network “effective,” “acts with integrity,” “influential,” “savvy” or “arrogant.”

The survey also asked participants to compare the reputation of Omidyar Network with groups like the Gates Foundation, Soros Economic Development Fund and the Rockefeller Foundation. 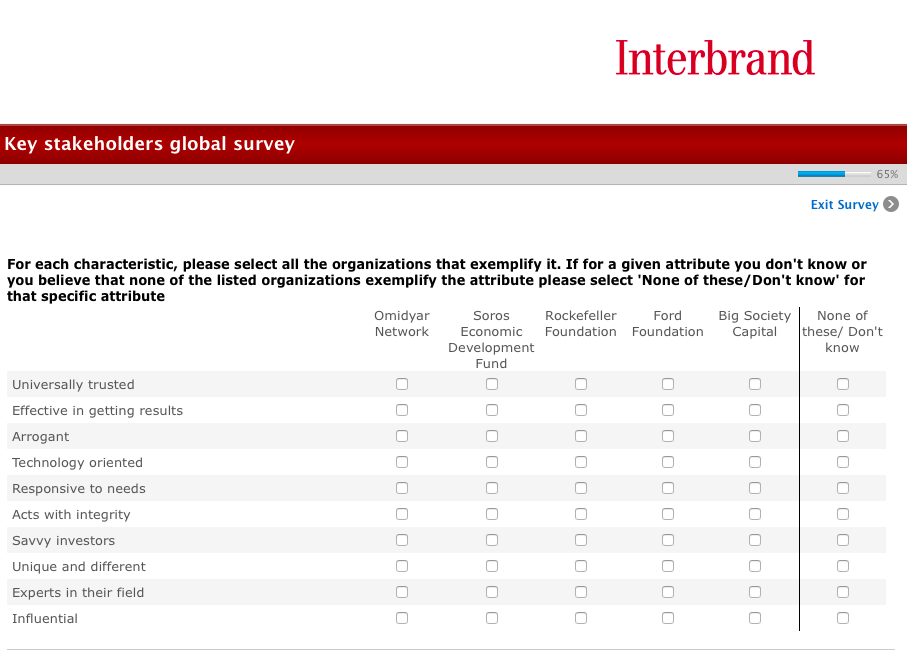 Towards the end of the survey, respondents were asked to rate the following statement about Omidyar Network on a scale of 1-10:

“I know a lot about this organization, what it stands for and what it does.”

Long-time Pando readers can, of course, confidently give that answer a 10. For everyone else, here are a few links that might be helpful…

Pierre Omidyar's man in India is named to Modi's cabinet

eBay Shrugged: Pierre Omidyar believes there should be no philanthropy without profit

We contacted Pierre Omidyar and Interbrand for comment on the brand exercise, but neither had responded by publication time.