What Pierre did next

After helping the State Department fund revolution in Ukraine, Omidyar is reportedly ready to invest in Gawker.
By Mark Ames
Jul 31, 2015 · 10 minutes

The Guardian reported on Tuesday that the National Endowment for Democracy has just been banned from Russia, under strict new laws regulating NGOs acting as foreign agents.

In that story, the Guardian cited the fact that Intercept publisher Pierre Omidyar co-funded Ukraine revolution groups with USAID and the National Endowment for Democracy (NED).

If the Omidyar connection sounds familiar, that’s because it was Pando that first broke the story in February 2014 (the Guardian linked to our original scoop in its coverage.)

In the 18 months since we broke the story, Ukraine has collapsed into war and despair, with up to 10,000 people killed and one and a half million internally-displaced refugees — and top US brass talk openly of a new Cold War with nuclear-armed Russia, while US military advisors train and arm Ukrainians to wage war on Russian-backed separatists.

Svitlana Zalishchuk, one of the leaders of the Omidyar-funded NGO that helped organize last year’s revolution in Kiev, is now in power as an MP in Ukraine’s parliament, a member of the new, pro-NATO president’s party bloc. She’s gone from plucky Omidyar-funded adversarial activist, to heading a parliamentary subcommittee tasked with integrating Ukraine into NATO.

I can’t think of another media tycoon who co-funded a pro-US regime change with American intelligence cutouts like USAID and the National Endowment for Democracy. That Putin targeted the NED does not mean it’s either heroic or evil—the NED’s story speaks for itself: The brainchild of Reagan’s CIA director Bill Casey, the National Endowment for Democracy was set up as an intelligence cutout to support US geopolitical power and undermine unfriendly regimes. One of the NED co-founders, Allen Weinstein, explained its purpose to the Washington Post:

“A lot of what we do today was done covertly 25 years ago by the CIA.”

More recently, the NED was caught funding groups that organized the 2002 coup against Venezuela’s democratically-elected president Hugo Chavez; planting a “free-lance journalist” in the AP and New York Times to report on Haiti while the NED was simultaneously funding rightwing groups to undermine Haiti’s ruling party; and co-funding Ukraine regime-change groups with Pierre Omidyar.

This week, Omidyar Network announced yet another partnership with the National Endowment for Democracy and the Poynter Institute to create an international online fact-checking hub. Given the power that a monopoly on “objective” fact-checking offers, the tie-up with the NED takes the Omidyar alliance with the US empire and media to newer, creepier levels. In yet another Omidyar-as-private-arm investment, Omidyar invested in the slick new Ukrainian media, Hromadske.tv, which was set up on the eve of the Maidan revolution with initial seed funding coming from the US Embassy in Kiev. Omidyar’s involvement in Ukraine media and “fact-checking” is all the more serious given that now Washington and NATO talk about “countering” Russia’s overhyped “information war” on the West and on Ukraine—this “information war” which I covered a bit in my piece on Peter Pomerantsev, is considered a top and urgent geostrategic priority for NATO and the West.

The connections between Omidyar and NED are difficult to believe, but that still doesn’t explain the response to the story from America’s most “fearless” independent bloggers and journalists.

In the roughly 24-hour period between the time we first published our Omidyar-Ukraine story, and when Greenwald finally responded with a bizarre “yes it’s true, so what not my problem” response completely contradicting his earlier pronouncements about Omidyar — the crowd that saw itself as most fiercely independent and adversarial was the same crowd that reacted most adversarially to the story.

I forgot just how insane the response was until this week, when I went back through some of the reactions. They read like the hysterical ravings of wounded Scientologists, and use the same playground strategy — playground taunts, bitter sarcasm — that wounded Scientologists tend to use when something that punctures their sacred narrative is aired not only to them, but to the general public who might now be laughing at them. 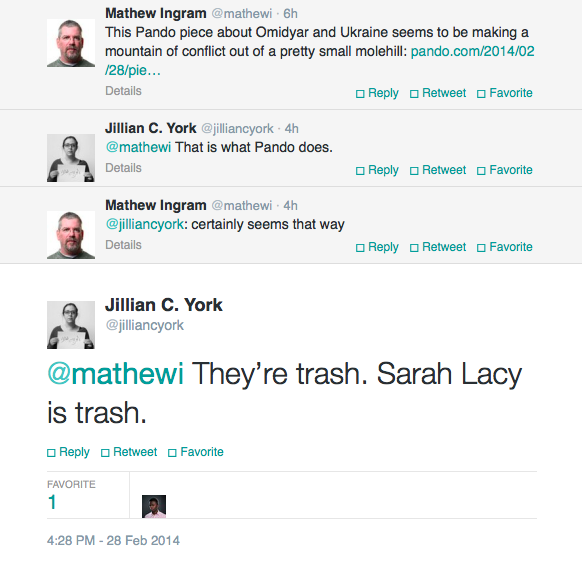 (Jillian C. York is Director of International Freedom of Expression at the Omidyar-funded Electronic Frontier Foundation. She later deleted the tweet.) 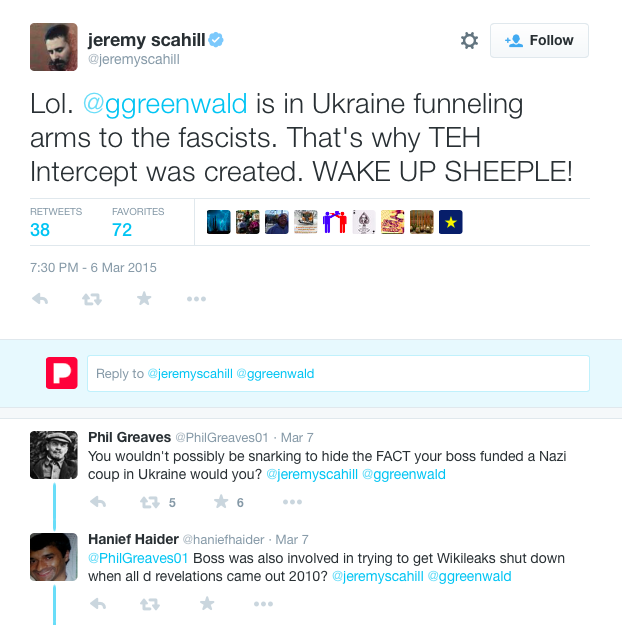 Again, there is no precedent that I know of where a media tycoon goes beyond just editorializing in favor of some US imperial expansion or policy, but actively participates as the private arm of the US State Department and intelligence cutouts. The story was so contrary to the consensus last year about Omidyar as some kind of Marvel comix superhero, a Big Tech Bruce Wayne who’d Segway’d to the rescue of American investigative journalism and protected our cherished American institution with his “civic-minded” billions. Glenn Greenwald personally vouched for Omidyar on Amy Goodman’s show, promising her progressive audience,

—while Jeremy Scahill gloated publicly that “Pierre” was creating a “journalistic paradise” at First Look unlike anything ever seen or experienced before, a quantum leap in adversarial journalism technology that would shatter all the old hierarchical models, and leave the White House completely powerless to so much as call Pierre on the phone, so removed from the old oppressive structures of power is He.

John Dolan, who in his academia days studied literary frauds and hoaxes, described how the real enablers in literary hoaxes like James Frey’s “A Million Little Pieces” and Margaret B. Jones’ “Love and Consequences” are the audience who want badly to believe those mythical stories are not just possible, but real:

Forgers count on a gullible, pious audience, though the pieties invoked may not be explicitly religious. Often, they're broader, older patterns of myth that we know at heart aren't true but want badly to believe.

In the case of Omidyar The Civic-Minded Billionaire Savior of Adversarial Anarcho-Left Journalism, the pious are the independent-left journalists, who see themselves as the only check on power, the anointed watchdogs and all that stands between government tyranny and Constitutional liberty. The pieties reach peak-insufferableness at Glenn Greenwald’s pulpit, where he’s spent the past eight or nine years tirelessly scolding and hectoring everyone for failing to live up to their sacred duties.

Someone who spends that much time scolding and hectoring and implicitly arguing that he’s that rare beacon of secular rectitude gains a lot of power over his believers, and it takes a lot more than mere facts to shake them awake once they’ve fallen for it. So just as the godly Christian preacher can cash in with flashy cars and suits and private jets and mansions without raising any doubts among his believers, so Greenwald could take his and Poitras’ exclusive monopoly access to the complete Snowden NSA cache and privatize them to a highly compromised billionaire deeply involved in the American national security state, a uniquely placed force for spreading neoliberalism and US geopolitical power around the globe — and get praised and adored even more by the one audience, progressive independent journalists, which is supposed to call bullshit on exactly this sort of sellout.

Indeed. As Dr. Dolan observed, writing about the James Frey literary hoax story (Dolan was the first to call Frey’s drug memoir a fake, in the pages of The eXile):

Frey's story of (fake) debauchery redeemed by stern self-discipline confirms Americans' beloved, fatuous beliefs that people change in mid-life and that self-discipline can overcome anything. That's all most readers of such tripe care about: the cultural bottom line, the ideology the story backs up.

Remember, the Omidyar Indie-Journalism Hoax was sold to us independent adversarial journalists at our profession’s most desperate, hopeless, defunded point. After years of mass layoffs and closings, the future looked even more bleak, prospects dimmer than ever.

Add to this a remarkable willful ignorance about what a billionaire even means today, politically and otherwise. A billionaire is so alien, so remote from the rest of the population, but particularly from progressive/independent journalists, who are more interested in emotionally-charged dramatic stories like war, drones, cops, oppression.... a tech billionaire seems like dreary stuff by comparison, even though billionaires are political power on a scale rarely seen in this or any country, giants among pygmies, except that they’re giants who look like harmless dweebs, and talk about boring dweeby things that don’t interest us.

So when Greenwald and Scahill and the others sold their followers a fantasy-billionaire, a billionaire of our dreams—a billionaire who was good, selfless, interested in us and our important mission for mankind — a billionaire who wanted to give us all the dirty, ugly, but necessary, money we lacked, without any strings attached, because he knew how important it was for liberty to protect and encourage our profession—it was the perfect snake oil, the answer to our prayers, the story we wanted desperately to hear. And we’d been plenty prepared by endless Hollywood movies about cold-hearted greedy billionaires who undergo the ol’ transformation of character and want only to do good—think Mr. Magoo’s Scrooge character, or a billion others like it.

Now seems like the right time to bring all of this up again, because the Omidyar “journalism paradise” dream has pretty much imploded on its own. The Intercept itself is still running, and putting out some good stories every so often — but the religious hysteria and the cultish defensiveness is pretty much gone. As are some of the very best journalists Omidyar had brought on board, and sat on for nearly a year — my former partner Matt Taibbi, whose “Racket” magazine never published a word; Ken Silverstein, one of my very few longtime journalism heroes, whose talent was also bitterly snuffed by Omidyar.

And now in the last week, the latest twist to the farcical “journalism paradise” shitshow: Omidyar is reportedly in talks with the king of online tabloid-sleaze, Nick Denton, to invest in the latter’s perma-sued organization. As Pando’s Paul Carr wrote earlier this week, the ground seems to be being prepared for a full-on merger of the Intercept and Gawker, backed by Omidyar’s cash.

As of yesterday, Nick Denton appointed John Cook -- formerly editor of the Intercept -- to be the “temporary” executive editor of Gawker. When Cook departed the Intercept, he wrote that “Working with my Intercept colleagues has been one of the most fulfilling things I’ve done in my career, and my decision to leave was a painful one to make.”

At the same time, IBT reported that Chief Revenue Officer, Michael Rosen, had resigned from First Look Media. Rosen’s departure comes just a week after John Temple, First Look’s “President, Audience and Products,” stepped down from his job saying “There clearly is much excitement ahead for First Look, but I feel my contribution is largely complete.”

Perhaps it’s a coincidence that both the guy who is in charge of building an audience for the Intercept and the guy tasked with making it profitable have left. Or perhaps not: IBT quotes a source explaining that “First Look would soon be moving away from trying to create a constellation of magazines and begin to focus on empowering ‘content creators.’ That is, Omidyar will be investing cash in sites like Gawker, alongside his investments in fact-checking sites and Ukraine revolutionary groups.

Snowden revealed that NSA spooks were spying on their lovers online habits — how will that be monetized in First Gawker Media? Where will Denton’s 20% sleaze discount be applied?