“A true leader.” That’s how Twitter investor Chris Sacca referred to Jack Dorsey earlier today, after Dorsey was reported to have spent around $875k buying Twitter stock on Friday.

The purchase comes just days after Dorsey was blamed for tanking Twitter stock with his disastrous performance on the company’s earnings call. It also follows Sacca publicly calling for Dorsey to be made permanent CEO of the struggling social network and for his co-founder Evan Williams to be installed as executive chairman.

Given Dorsey’s reported $2.7 billion dollar net worth, the act of writing a sub million dollar check might be seen less as leadership and more as a cheap PR stunt. But as stunts go, it’s an effective one: Sacca’s “leadership!” narrative is retweeting its way across social media, nicely positioning his guy for the top job.

But what of the stock transactions of Evan Williams -- Sacca’s pick to replace Dorsey as Twitter’s exec chair? On those Sacca remains decidedly mute. A look at some of Williams' SEC filings suggests a good reason… 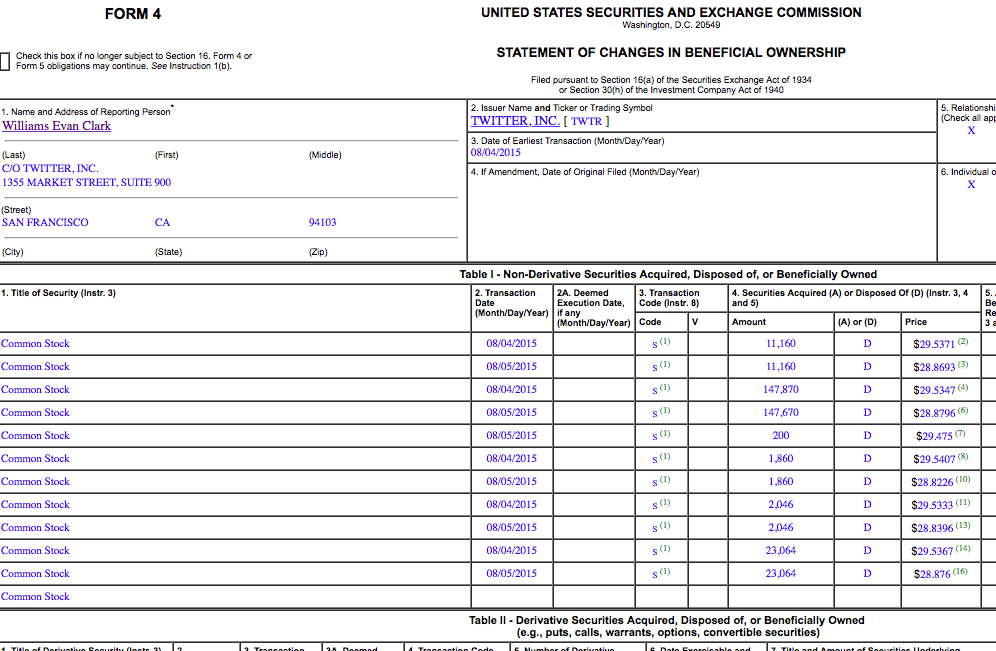 While Dorsey splurged a whole $875k buying more of Twitter, Williams has been steadily offloading the company’s stock by the bucketload.

Just this past Tuesday, Williams offloaded almost 11 million dollars worth of Twitter stock, in addition to the $13m he shifted in late July, and the $13m in June, and $24m in April and… and....

In less than six months, Williams has cashed out almost seventy times more dollars from Twitter than Dorsey spent buying his new nest egg. If that transaction makes Sacca’s choice for CEO look like a natural leader for Twitter, it’s not clear what we’re to make of his choice of exec chairman.

I sent Sacca an email asking him that question. The clock is still ticking on his reply.