Pando goes to, and is escorted out of, Y Combinator demo day

It's Crunch time for another batch of hopeful Tech startups!
By Dan Raile
Aug 19, 2015 · 7 minutes

A few dozen young men, roughly grouped by the colors of their T shirts, rapidly consume hot catering. It’s Y Combinator Demo Day, and in about half an hour this cohort will face the specially assembled bulls. But for now there is not an investor, or a woman for that matter, in sight.

Elsewhere, teams are strategizing, making last minute adjustments and milling anxiously. The boys from BistroBot seem especially busy at tweaking their Goldbergian sandwich-maker – which, if things go right today (and for many, many days after), could be the school lunch cafeteria program or the food-engine of single-person food trucks of the future.

Out on the balcony, Cofactor Genomics CEO Jarret Glasscock runs through his pitch, ten times or more, with a colleague. It’s spot-on each time, with subtle modulations of emphasis, a concise explanation of Cofactor’s position on the cusp of bringing its singular diagnostic RNA-testing software to the world. The sun is relentless, I’m sweating on the airless balcony just sitting down. Between renditions, Glasscock complains that his throat is drying out. Each time his teammate presses him on. “Just one more, then we’ll go get Starbucks.”

Perhaps tellingly, everyone I asked about what time the pitch-fest started gave me a different answer: it's often said that it is hard to get accurate numbers at Demo Day.

The hardware being exhibited in the Grand Hall gave it roughly the look of a pop-up food court. There was the aforementioned sandwich-bot, its tubes of foodstuffs from peanut butter to hummus topped off, its man-sized assembly mechanism idle and ready. A tea-bot, a coffee bike, and a micro-greenhouse tiered with living greens. A by-the-cup coffee roaster.

There was also a six-prop drone the size of a juvenile golden eagle and a bed lain with a sensor-rich mattress pad (and a prone hacker), next to a water-saving shower-head.

I made my way past smiling faces of computing pioneers set in plaques, into the nearly-empty auditorium, and was enjoying another practice pitch, when a security guard appeared. The event is only open to specially invited guests of Y Combinator. Did I have a badge?

I did not. In fact, I’d arrived hours before registration opened, in the hope of giving Pando readers a glimpse behind the scenes of the biannual startup frenzy (and because the event schedule is only available to invitees). My attempts to secure a press pass through the proper channels had been unsuccessful -- more on that shortly.

As I left the auditorium, I checked back on the Grand Hall. There, too, the message was going around: make sure you have your badges, registration is opening, soon the madness will begin. I had to get out of there. 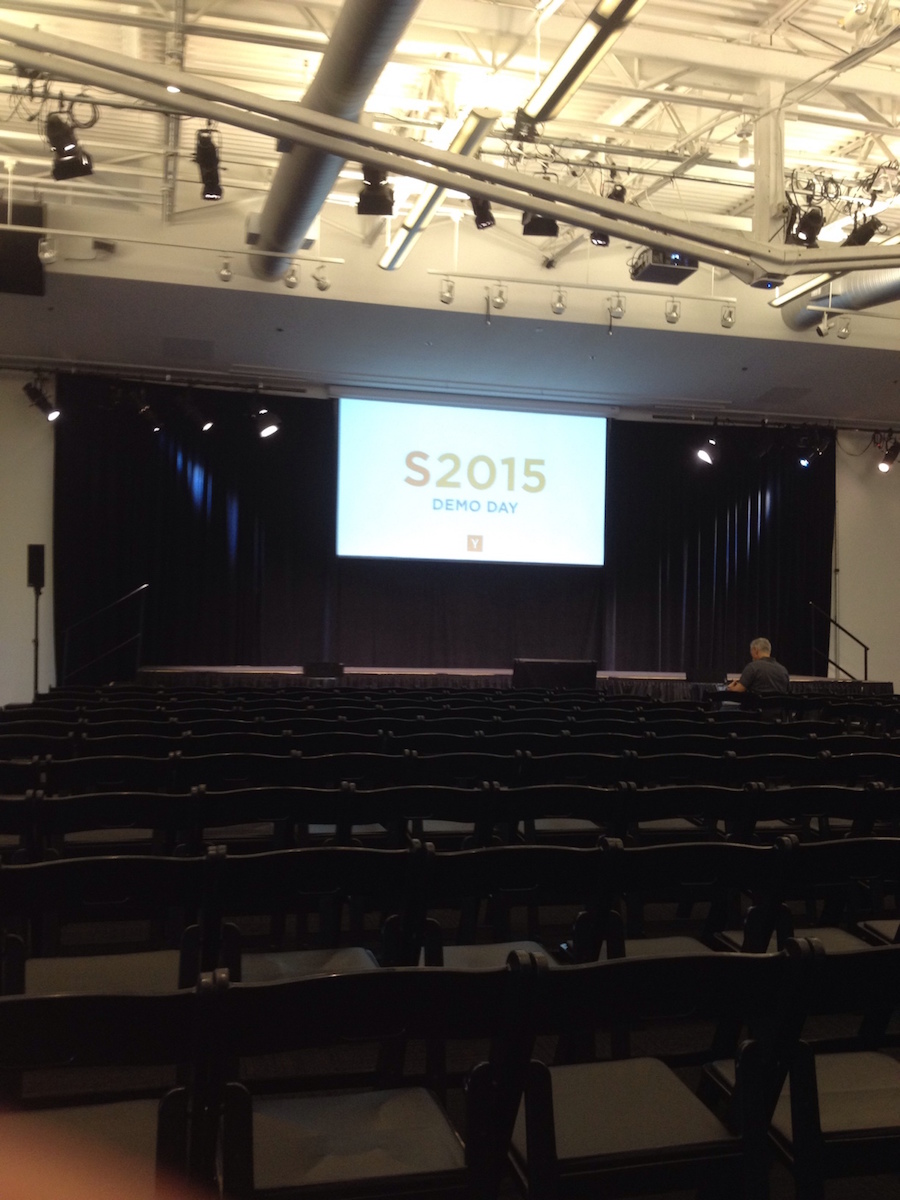 In Spain there have been calls for a ban on the traditional runnings of the bulls after a summer of carnage. In Silicon Valley the pastime endures, though blood has been recently shed and prognosticators warn: there will be unicorpses.

On the concrete carpet leading up to the museum’s main entrance, an entire ecosystem of mostly middle-aged white men appeared and flowed towards the door. The Tesla charging stations in the parking lot were quickly occupied. A man who said he worked for Google on projects including car automation borrowed my pen to write down specs on a business card as he grilled the team from Auro Robotics, who stood around their sensor-rigged, self-driving Polaris cart just outside the entrance. He also does some seed investing.

Within 20 minutes of registration opening, the tide of investors had ebbed, and stragglers picked up their pace. Inside, the mingling ritual began, echoing throughout the galleries, as the assembled waited for the opening of the inner door.

I noticed a handful of tech reporters in the crowd as well, almost all of them from TechCrunch. Asked why the event had space for a seemingly endless number of TechCrunch writers but not a single person from Pando, Y Combinator’s Director of Events Susan Hobbs insisted there was no special favoritism. It was just a simple matter of available space, and she had personally rejected my application after TechCrunch’s army had beaten me to the punch.

Certainly Hobbs would be aware of such a deal if it existed -- after all, she joined YC from her previous job at… uh… TechCrunch.

For what it’s worth, my editor Paul Carr -- also previously of TechCrunch -- told me that, under Mike Arrington and Paul Graham, TC and YC certainly did have a “ludicrously friendly relationship” in which TechCrunch was given broad access to all YC startups, in return for guaranteed coverage.

I didn’t want to believe that was true: Surely the more, broader coverage of these hopeful new companies the better? And, more importantly, surely no journalistic organization would make a deal to guarantee coverage of any seed fund's companies.

At the very least, a glance at the YC blog suggests that TechCrunch writers are paying particularly close attention to Y Combinator, and vice versa: 57 of the first 77 YC company profiles on the blog feature the line “read more about it here on TechCrunch” or some close approximation. Thirty-one of the 52 companies that pitched yesterday have been previously featured on TechCrunch. (Also spotted on the front page of YCombinator.com, this unfortunate-in-hindsight testimonical from Adora Cheung:  “Homejoy would not be where it is today without YC...")

Despite calls from Paul Carr to Hobbs -- who, Carr tells me, “reiterated that Pando being denied access had nothing to do with our coverage, before complaining about the disrespectful tone of our coverage of the Code conference,” -- her decision was final. Hobbs was nice enough though, and apologetic. She offered to connect me to YC’s S15 startups after the event. And she showed me a video on her phone of the BistroBot in the act of serving up a hummus and cucumber sandwich.

Emails to Y Combinator and Paul Graham requesting comment for this story went unanswered. The closest I got to an on-the-record comment confirming that press access was based on favor, not fire code, was when a YC registration official rejected my request for a badge, for the final time: “It’s an invite-only event for investors, and only a few select press are invited.”

How I dream of one day being “select press.”

I spent most of the remainder of the afternoon on the museum’s shaded lawn, but it wasn’t a total waste.

I managed to talk to a handful of startups, in part because, to its credit, Y Combinator includes companies from all over the globe. This results in more smokers per batch than it likely would if all the entrepreneurs hailed from greater Stanford. I won’t out these particular smokers here, lest big data analysis, natural language processing and entrepreneurial schemes in health care tech conspire to scrape this content for insurance companies. Crazier shit gets pitched all the time. I lined my pockets with business cards.

I also finished “Machines of Loving Grace” by New York Times’ science reporter John Markoff, out next week, which I’ve been meaning to review and shamelessly plug my review of in some other context. Incidentally, Markoff is giving a talk at the Computer History Museum next week, so it seemed appropriate.

I also had the chance to catch up with a few of my fellow tech journalists to shoot the shit about the state of tech journalism. One, who for obvious reasons needs to remain nameless, was kind enough to offer his-or-her opinion on YC’s -- uh -- inconsistent relationship with the press. After glancing warily from side to side like a snitch in a pool hall booth in some gangster movie, the reporter leant in and whispered… “Sam Altman hates journalists.”

Well, not all journalists.