Imagine two of the meanest, dumbest, most disgusting people on earth were taking part in a bare-knuckle boxing match.
By Paul Bradley Carr
Aug 28, 2015 · 2 minutes

Imagine two of the meanest, dumbest, most disgusting people on earth were taking part in a bare-knuckle boxing match.

Would you watch? Would you pick a side? Or would you just take comfort from the fact that two awful people are punching each other repeatedly in the face? A truly victimless crime.

These are the questions with which we must wrestle as we consider the defamation lawsuit filed by Charles “Chuck” Johnson (pictured above) against Gawker Media (also pictured above).

Chuck Johnson, in case your brain has remained unpoisoned by that name is the “editor” of “Got News” a conservative “news” site “responsible” for such Pulitzer-worthy “scoops” as “Obama is Gay” (he isn’t), “This New Jersey Senator solicited prostitutes in the Dominican Republic” (he didn’t) and Was Amtrak Train Engineer #BrandonBostian A Tranny Supporter?" (I don’t even know what that means.) He also gleefully names alleged rape victims and once tried to smear a pregnant black woman who was injured by police in Ferguson.

Gawker, of course, you already know.  Yesterday, just one month after they pledged to be “20% nicer,” they published this piece of penetrating, insightful media coverage…. (blurring mine) 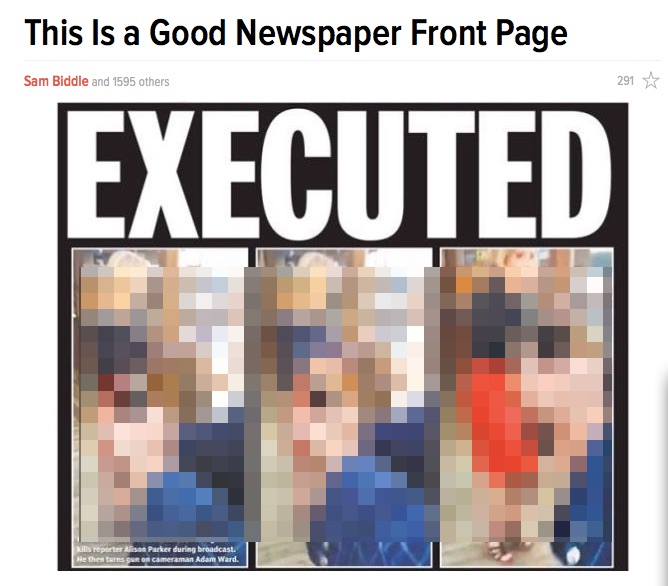 Because they gotta break up all that “this guy might have visited Ashley Madison” stuff with something.

The $66m legal fight between Johnson and Gawker arose after Gawker’s JK Trotter “reported” on rumors that Johnson had once defecated on a floor while in college. Johnson denies the rumors.

You can find a copy of the lawsuit here.

Now, after some tussling over jurisdiction -- the suit was filed in St. Louis for some reason, although Johnson and Got News are reportedly based in California -- Gawker media has hit back.

Specifically they’ve filed a motion (embedded below) under California’s anti-SLAPP statute. As Gawker’s attorney explains in their motion, filed in a Missouri District Court:

This statute, which has been regularly applied by federal courts around the country in defamation cases arising under California law, may be invoked where, as here, a defendant faces meritless claims attacking its protected speech. Precisely in order to prevent litigants from inflicting damage through the litigation process itself, the statute provides for prompt dismissal with prejudice of claims such as these and requires recovery by defendants of their attorneys’ fees and costs.

If successful, the anti-SLAPP motion will allow Gawker to have the case dismissed before it even gets started.

While we wait for a judge to decide whether California law applies in the case, and specifically whether the case should be dismissed under anti-SLAPP, we can all enjoy the legal filings, which include an appendix containing a list of the claims which Johnson objects to, and Gawker’s responses to those claims.

Or we could just read a nice book.