A reminder that ridesharing companies don't have the monopoly on creepy drivers and victim shaming.
By Paul Bradley Carr
Jan 19, 2016 · 5 minutes

The taxi industry has apparently settled on a new strategy to combat Uber.

It has decided to be just as gross as Travis Kalanick and co when responding to criticism, particularly when that criticism comes from female tech reporters.

Exhibit A: The horrifying response to a story by TechCrunch’s Sarah Buhr about her experience taking a cab in Vegas during CES.

He asked me how long I was in town for. I said Saturday. He then asked me if I was staying here alone. That was my first inkling this guy might be dangerous...

Then I was asked if I’d like to go hang out right now. My heart started to race, my breaths shortened and I suddenly realized I had no idea where I was in the jungle of Vegas, with a cab driver unattached to an app I could easily trace back to information about him, should something go wrong...

“No, I have a boyfriend,” I reiterated, thinking to myself I shouldn’t have to justify my unwillingness to hang out based on whether or not I have a man in my life. But a guy like this one doesn’t care what you want, anyway...

I looked out the window at that moment to a scene I remembered was close to my hotel. But then we took a different turn than I’d remembered from the other night. I asked the cab driver about this and he told me it was a shortcut...

He continued to chat with me, this time about his love of soccer and how his girlfriend didn’t appreciate him… I also had no app in front of me to show the correct route like I would with Uber and Lyft, so I quickly fired up Google Maps on my phone to check. We were not going the right way.

It's an unpleasant story, but one that any sane person would agree deserves to be widely read. Not least because it reminds us that, while Uber sometimes seems to have the monopoly on driver misbehavior, bad things happen in regular cabs too.

Now, for what it’s worth, I don’t agree with Buhr’s conclusion -- that Uber and Lyft are safer because they’re trackable (tell that to the countless women assaulted in ridesharing vehicles.)

But -- speaking as someone who lived in Vegas for almost three years, and took a lot of cabs -- nor do I have any reason to doubt her story.  For every delightful cab driver I encountered in the city, there was a creepy one, or a racist one or one who had absolutely no fucking idea where he was going. Female friends of mine experienced the exact same type of behavior that Buhr writes about. The problem of cabs in the city deliberately “long hauling” passengers by taking them the wrong way is well documented.

And then there’s this guy…

Given the enthusiasm with which the taxi industry jumps on every claim of misbehavior by Uber drivers, one might expect stories like this to give it pause. That Buhr’s story might be a good opportunity for cab drivers to show they hold themselves to a higher standard than Uber. To send a clear message: That’s not who we are. The vast majority of us don’t behave that way towards women -- and if we hear about anyone doing so, we won’t resort to the same disgusting victim blaming that Uber has been criticised for in the past.

Wouldn’t that be great?

Instead, since Buhr’s story was published, it has been inundated with commenters, many identifying themselves cab drivers, accusing Buhr of fabricating her story, describing her as a “lier” [sic], an “idiot”, a “curropt [sic] reporter and paid by Uber," and worse...

RD Singh: What a bs fake story, (The taxi didn't had a license plate and where to find the license plate) wow was this lady drunk or what. First a taxi will and should always have a license plate. I have taken taxi in vegas and other places that never happened to me or my family we all took taxis at different time. I own a small taxi company in San Francisco. I try to be friendly with my customers by have a chitchat that doesn't mean that I am dangerous. Wow taxi drivers are dangerous then ridesharing driver like uber amazing fake story.

Trevor Johnson Driver at Flywheel Taxi App: This reporter is clearly a nervous ninny, confused about how getting in a strangers car is something that has had a hundred years to be fine tuned. There is a reason there has been over 70 incidents of sexual assault by Uber and Lyft drivers nationwide over the last year, and less than 7 in legit taxis nationwide in the same period.

She is a victim of Uber/Lyfts explotation of Maslow's Heirarchy in their quest for market dominance. I guess she won't wake up till her Uber/Lyft driver is on top of her.

Rex D Stock: This story is an absolute lie. There's no way this happened. Millions have taken taxis in Vegas and I have never heard anything like this. Trust me, no matter how attractive the lying author might be, there are plenty (plenty, plenty, plenty) of pretty women in Vegas who would have reported this type of behavior before. Tech Crunch should be ashamed for publishing this crap

Marcus Gafter: The guy didnt even do anything wrong aside from make small talk, this lunatic woman who clearly has issues she needs to work out took it to a whole weird level.

Wayne Hillis : This sounds like total bullshit. I don't believe one word of it. It's unbelievable the lengths that this company or people that love this company will go. It sounds like something the Uber brass wrote and paid her to submit it. What a joke.

Meanwhile, a cursory search of Twitter shows accounts belonging to cab companies, or groups representing the industry, joining forces to smear Buhr as an Uber plant... 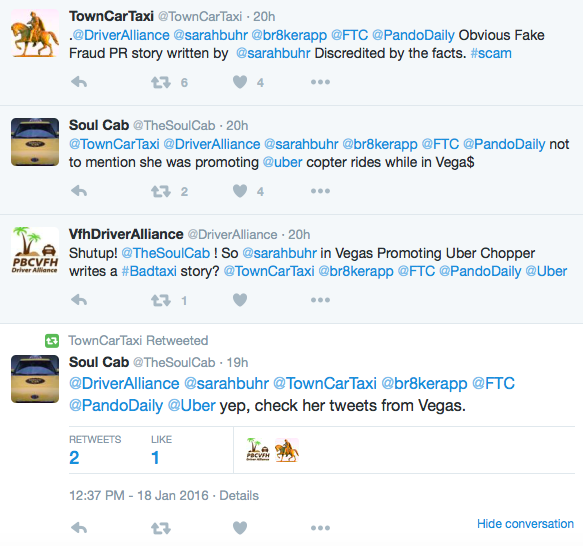 If the cab industry wonders why Uber continues to gain traction despite the company’s ugly behavior, here’s your answer. Passenger know that the alternative can be just as fucking gross.