The new gatekeepers: One-third of all startups to raise a Series A graduated from an incubator

For an industry that has changed little since the 1950s, venture capital saw a lot of -- ahem-- “innovation” in the last boom cycle.

Ok, now that I go over the list, it might be more appropriate to say there were a lot of reduxes of “innovations” seen in the dot com days. The question is now that we enter a downturn, will the ones that didn’t survive the dot com crash stay part of the industry?

Clearly a lot of those late stage mega-rounds are going to go away. Plenty of them were done by hedge funds, mutual funds, and other investors who were seeking appreciation in an age of no interest rates and tech companies going public later and later. “Tourists” as “real” VCs have been calling them for the better part of a year.

Afterall, there were a few fundamental shifts between then and now. The cost of starting a company plummeted to some 10% of what it was. And when it comes to crowdfunding the actual laws changed.

One trend the jury is still out on is incubators. Sure Y-Combinator has done well, but its entire portfolio is heavily reliant on Airbnb and Dropbox. Paul Graham, the polarizing visionary of it, has stepped aside from day-to-day operations, which always spells some uncertainty in the relationship-driven, clubby venture world. The fates of some of its unicorns-- such as Stripe, Instacart-- are very much TBD in 2016. And YC is the gold standard.

Far more have shuttered or just seem to be limping along.

I’ve long suspected incubators were essentially havens of adverse selection. What was meant to lower the barriers of entrepreneurship, giving founders mentorship, office space, office hours, encouragement and in some cases tiny amounts of cash and introductions to those with huge amounts of cash, could possibly lower them so much that only the founders who are willing to part with equity to not have to do those things themselves join. The worse the incubator, the more likely this is the case.

And so, with all that, I found this graph shocking: 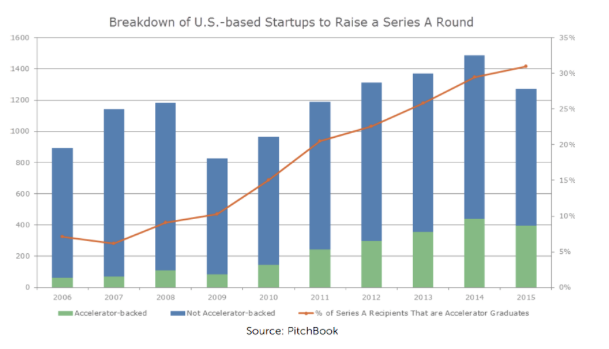 It’s courtesy of Pitchbook, and it shows that one-third of all US startups that raised a Series A Round were graduates of accelerators. That’s pretty meaningful, because Series A rounds aren’t easy. They aren’t something you raise at demo day. They’re something you raise once the hype is done and you gotta build a real company. Only 30% or so of companies that get seed funding get a Series A. That accelerators have performed this well is surprising. And, it’s accelerated every year for the last nine years, although the rate of acceleration slowed last year.

I’d love to see a breakdown of specific incubators driving it year-over-year, how many are in major markets like New York, LA, and San Francisco and how many are elsewhere, and I’ll post an update if I get more granular data. But it’s interesting that something that was taking advantage of trends to democratize entrepreneurship seems to have created a new category of king makers.

The question-- getting back to my opener-- is how they’ll fare in a market where funding is harder to come by. Pitchbook expects it could finally fall. We’ll see how far.