It’s 5 PM somewhere: Your weekly round up of depressing Techpocalypse news

There are tons of data points whizzing around about just how bad things may be getting in the tech world.

We try to cover as many as we can here on Pando, but we can’t delve deeply into them all. And so, as founders try to get their bearings in the early days of 2016, I thought a weekly roundup of the salient ones covered elsewhere might make for interesting reading.

And because it’s inherently depressing, feel free to save it until the end of the day and accompany it with a drink.

Fenwick & West tells us what we kinda already knew: Anyone getting a unicorn round in the fourth quarter gave up a lot to get there.

As year went on investor friendly terms -- downside protections and guarantees-- went up substantially. And the average valuation of unicorns in the fourth quarter was $1.6 billion-- just over the line and down from an average of $5 billion in the second quarter and $4 billion in the third quarter.

Put it together: Entrepreneurs were stretching for the sake of optics, vanity, and press. All three things that are important, but shouldn’t be the ruling factors of how you run your company. Entrepreneurs have justified the ego of becoming a unicorn and the foolish decision to disclose valuations to the press by saying it helps with recruiting. They’re going to have to find a new tactic going forward.

Also interesting: The percentage of the deals that were lead by non-VCs was a staggering 84%, up from 75% the year earlier. That’s institutional investors, foreign capital, mutual funds, corporates and the like. Or as the industry calls them: Tourists and hot money. The average round size was $222 million and average ownership bought was just 9%. (Which shows why entrepreneurs were in a full on frenzy to get these deals done before the market crashed.)

Here’s the bit to watch next time this report comes out:

Those percentages are sure to change.

Lyft shareholder stunner: Andreessen Horowitz and Peter Thiel sold some $148 million in shares during the last round. They sold it to Saudi Arabia’s Prince al-Waleed bin Talal, an investor in Lyft’s Series F, and it was only a portion of their holdings. This isn’t a huge shocker. Even Accel sold some Facebook stock to realize gains before it went public. I’ve talked to several LPs who wish early investors had taken some profits out of Fab before it collapsed in value. [Disclosure: Marc Andreessen, Peter Thiel and Accel are all Pando investors]

There can be many reasons investors sell some shares, and it may have to do with offsetting weakness from other deals or deals that are simply taking too long to exit. But it could also be a statement on the confidence in Lyft’s management team or the economics of ride-sharing overall heading into a bear market where cash will be harder to come by and IPOs are non-existent.

At $5 billion or so, Lyft is comparatively a “value” unicorn next to Snapchat, Dropbox, Airbnb, and certainly Uber. But no one really knows what 2016 will hold, especially in a world where public stocks are getting seriously reevaluated and tech names like Pandora, Yelp, Box, New Relic, and others are dangerously close to slipping below $1 billion market caps.

Speaking of valuations… Pitchbook has published a chart showing how many public companies are below their last private price.

It’s validation for those who’ve argued private investors aren’t rationally valuing companies. But at the same time, remember, this doesn’t necessarily represent pain for anyone other than the people still running and building these businesses. Most VCs have long ago cashed out of these companies and invested early enough these were still big winners.

Still, remember when Groupon was the fastest growing company of all time? It shows five years or so is an eternity in tech when everything can change.

This depressing chart courtesy of Fred Wilson. He also had uplifting words about the benefits of discipline that comes with navigating rough waters. But, the chart…. 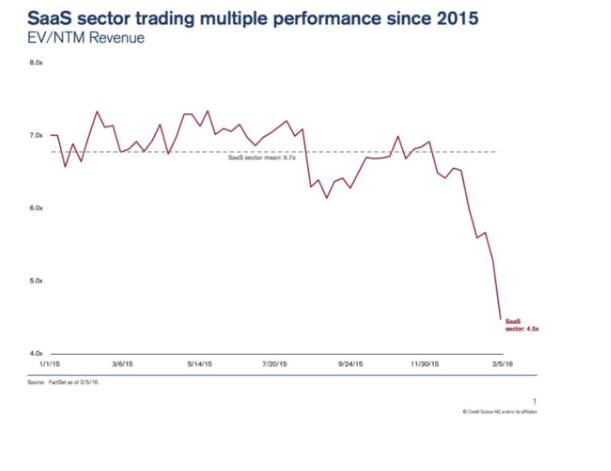 Business software is the most consistent, reliable money maker in Silicon Valley history. If it’s reeling this much, imagine how investors are feeling about, say, food and beverage startups. We’ve heard rumors that layoffs are coming at several of the recent software companies that have IPO’d and are now facing a new market reality.

Despite everyone’s complaining about the cost of doing business here, San Francisco commercial real estate has been softening for six months.

Some stats from Dan Mihalovich, whose company finds leases for tech companies:

This is good news, too. It means burn rates might be able to come down if terms start to ease. It also could be a sign of discipline and a pull back in spending as those rounds got harder to close and the terms to close them got uglier.

There’s opportunity in every downturn. The more you know where things are softening, the better you can go after it.