This week’s media Rorschach test: Who did Facebook kill by opening up instant articles to everyone?

Here’s the lead I wrote on this story when I started writing it a few days ago:

In five years time, what will distinguish Facebook from Buzzfeed? Except hundreds of billions in market cap, that is.

My point was that Facebook’s decision to open up Instant Articles to everyone would effectively blur the line between what it is Facebook does and what it is Buzzfeed does-- at least from a consumer point of view.

In the past the two had a peanut butter and chocolate like symbiosis where Buzzfeed would pay for and provide editorial that fit perfectly into Facebook’s distribution system. Some of it is frivolous, sure. But there’s also amazing reporting. That perfect mix is a big reason the percentage of US Facebook users who consider the platform a source for news rose from 47% to 63%. It’s Jonah Peretti’s thesis that you can read Proust and turn around to pet a cute dog. Mixing up our investigative political journalism with our cat videos.

But if freelancers and independent bloggers can post articles directly to Facebook, and get distribution and compensation for that, does that carefully constructed journalism mix from Buzzfeed still matter as much to Facebook? That’s a big problem because Peretti has bet the company not on Buzzfeed’s own site and apps but on distributed platforms like Facebook. So has Refinery29.

You can see why from this graph: 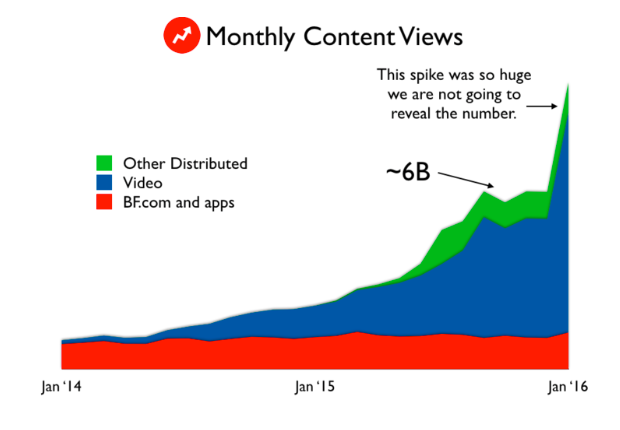 The problem is if Facebook and Buzzfeed are both in the “content business” from a reader point of view, Facebook has a massive and unfair advantage: It doesn’t have to make money as a content business.

But as I started to make that argument, I realized a more obvious one was that this had the potential to threaten Medium even more. Medium is known as the home of the personal press release. But Facebook is also the place where people write thoughtful emotional posts about next chapters in their lives. If Instant Articles yields more of a blog-like template, what will the distinction between the two be?

Mark Suster wrote an interesting piece recently about spending more time on Facebook versus Twitter. Not only that, but the time he spends has become more about his writing. From the piece:

...I knew that every media company I backed and every eCommerce company I worked with was getting significantly more engagement in FB than in Twitter so I figured the same had to be true for me as a blogger but I wasn’t sure how to make the transition.

Mostly I was encouraged by Robert Scoble who seemed to most ditch Twitter entirely and even a separate blog and began engaging natively right in Facebook. And I noticed how many comments his posts generated and I thought that would be a very useful platform for me.

And that was before Instant Articles. What won’t happen is the majority of freelancers suddenly having huge success and making large salaries publishing directly to Facebook, any more than super successful YouTube celebrities are the norm there. But there will likely be a few who Buzzfeed the shit out of the medium.

To that point, a third argument is that Instant Articles doesn’t necessarily kill anything in the market now as much as it represents a new version of something we saw in the early days of blogging. Today, would an Om Malik or a Michael Arrington who just wanted an independent place to write get a Wordpress account and outsource ads to Federated Media? Nope, they’d go to Facebook Instant Articles.

Some in the press have even speculated that Facebook will commission a few top name columnists to set the aspirational bar. Their own David Pogues and Katie Courics except people actually read content on Facebook.

If it goes that route, you could imagine Instant Articles becoming a sort of modern Huffington Post. Sheryl Sandberg certainly has the Hollywood-DC connections to rival Arianna Huffington’s if she wanted to go the route of asking friends to post opinion pieces directly to Facebook instead of elsewhere.

This much is clear: The move will kill, dislodge, hurt a good chunk of media. Facebook is too powerful and too good at looking out for its own interests over those of its platform partners.

But what is a Buzzfeed to do? Whether we like it or not: You can’t be a news publication without Facebook playing some role in your life, anymore than Rupert Murdoch could say with a straight face that Google has only been a taker when it comes to news. Yeah, all those SEO tricks just ended up in stories and headlines and tags by accident.

So far, only a handful of content companies have exited for north of $100 million and none have come close to exiting for $1 billion. VICE and Buzzfeed may represent dramatically different playbooks but they have two things in common: They are the most likely to build actual unicorn content companies and they have only gotten to paper unicorn status via third party platforms like YouTube and Facebook respectively.